One of the places I had my eye on to visit for a long time were the ruins of Tikal Guatemala.

Tikal is a UNESCO World Heritage Site. This is what their website says about it:

Tikal National Park is located in Northern Guatemala’s Petén Province within a large forest region often referred to as the Maya Forest, which extends into neighbouring Mexico and Belize. Embedded within the much larger Maya Biosphere Reserve, exceeding two million hectares and contiguous with additional conservation areas, Tikal National Park is one of the few World Heritage properties inscribed according to both natural and cultural criteria for its extraordinary biodiversity and archaeological importance. It comprises 57,600 hectares of wetlands, savannah, tropical broadleaf and palm forests with thousands of architectural and artistic remains of the Mayan civilization from the Preclassic Period (600 B.C.) to the decline and eventual collapse of the urban centre around 900 AD. The diverse ecosystems and habitats harbour a wide spectrum of neotropical fauna and flora. Five cats, including Jaguar and Puma, several species of monkeys and anteaters and more than 300 species of birds are among the notable wildlife. The forests comprise more than 200 tree species and over 2000 higher plants have been recorded across the diverse habitats.

Tikal, a major Pre-Columbian political, economic and military centre, is one of the most important archaeological complexes left by the Maya civilization. An inner urban zone of around 400 hectares contains the principal monumental architecture and monuments which include palaces, temples, ceremonial platforms, small and medium sized residences, ball-game courts, terraces, roads, large and small squares. Many of the existing monuments preserve decorated surfaces, including stone carvings and mural paintings with hieroglyphic inscriptions, which illustrate the dynastic history of the city and its relationships with urban centres as far away as Teotihuacan and Calakmul in Mexico, Copan in Honduras or Caracol in Belize. A wider zone of key archaeological importance, around 1,200 hectares, covers residential areas and historic water reservoirs, today known as “aguadas”. The extensive peripheral zone features more than 25 associated secondary sites, historically serving protective purposes and as check-points for trade routes. The peripheral areas also played a major role for agricultural production for the densely populated centre.

Research has revealed numerous constructions, carved monuments and other evidence bearing witness to highly sophisticated technical, intellectual and artistic achievements that developed from the arrival of the first settlers (800 B.C.) to the last stages of historic occupation around the year 900. Tikal has enhanced our understanding not only of an extraordinary bygone civilisation but also of cultural evolution more broadly. The diversity and quality of architectonical and sculptural ensembles serving ceremonial, administrative and residential functions are exemplified in a number of exceptional places, such as the Great Plaza, the Lost World Complex, the Twin Pyramid Complexes, as well as in ball courts and irrigation structures.

Criterion (i): Tikal National Park is an outstanding example of the art and human genius of the Maya. Its wealth of architectural and artistic expressions also contains important symbolic elements, such as the concept of pyramid-as mountains that define a universe where human beings coexisted with their environment. It is also an exceptional place of cosmological connotations and was considered to have been a “stage” for theatrical representations.

Criterion (iii): Tikal National Park has unique elements that illustrate the historic, mythical and biographic data of the Tikal dynastic sequence. These exceptional records span over 577 years (292 b. C. to 869 a. D.) and register the lives of 33 rulers who reigned over a vast territory of the ancient Maya world. The earliest stone sculpture is Stela 29 dated to the year 292 and the last monument sculptured is Stela 11 dated to the year 869.

Criterion (iv): The archaeological remains at Tikal National Park reflect the cultural evolution of Mayan society from hunter-gathering to farming, with an elaborate religious, artistic and scientific culture. The most representative remains show different stages and degrees of evolution in terms of architectural development related to religious activities and ceremonies. They also exemplify the political, social and economic organization achieved, as expressed by the urban layout its palaces, temples, ceremonial platforms, and residential areas and the wealth of monuments decorated with hieroglyphic inscriptions.

Criterion (ix): The landscape mosaic comprising savannas, lush forests, wetlands and various freshwater systems is part of the Maya Forest, one of the conservation gems of Central America, hosting a rich diversity of flora and fauna as a result of a remarkable evolution of species and ecological communities. The seemingly pristine ecosystems represent an impressive natural recovery after historic conversion and intensive land and resource use during the many centuries as one of the centres of the Mayan civilisation. The ongoing biological and ecological processes are supported and protected by the large scale of the Maya Forest, and particularly its many conservation areas.

Criterion (x): The Petén Region and the Maya Forest are home to an impressive diversity of flora and fauna across its various terrestrial and freshwater habitats. More than 2000 higher plants, including 200 tree species have been inventoried. Palms, epiphytes, orchids and bromeliads abound in the various forest types. The more than 100 mammals include over 60 species of bat, five species of felids – Jaguar, Puma, Ocelot, Margay and Jaguarundi, as well as Mantled Howler Monkey and many endangered species such as Yucatan Spider Monkey and Baird’s Tapir. The more than 330 recorded bird species include the near-threatened Ocellated Turkey, Crested Eagle and Ornate Hawk-Eagle, as well as the vulnerable Great Curassow. Of the more than 100 reptiles the endangered Central American River Turtle, Morelet’s Crocodile and 38 species of snakes stand out. In addition to 25 known amphibian species, there is a noteworthy fish fauna and a great diversity of invertebrates. The property is also known for wild varieties of several important agricultural plants.

They do have a sunrise tour that starts at 4 am!! I thought about doing it but it is mostly cloudy these days.

I did wake up early though. I heard the rain and went back to sleep until 7 am. ha ha.

The following is my walk around Tikal in pictures. 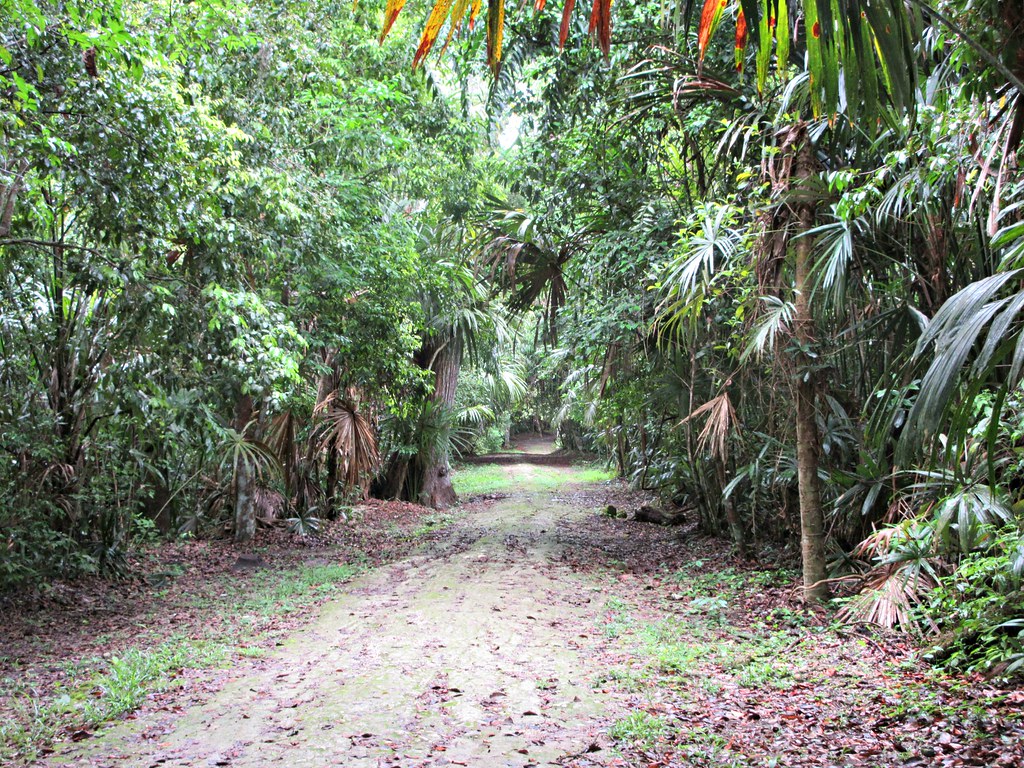 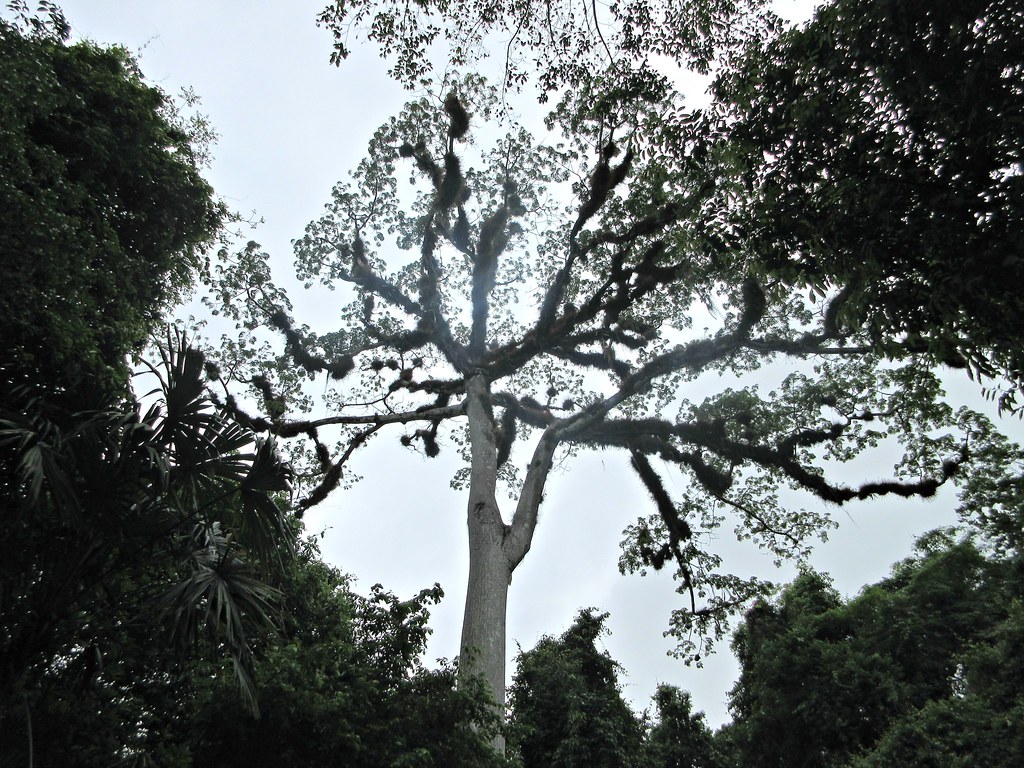 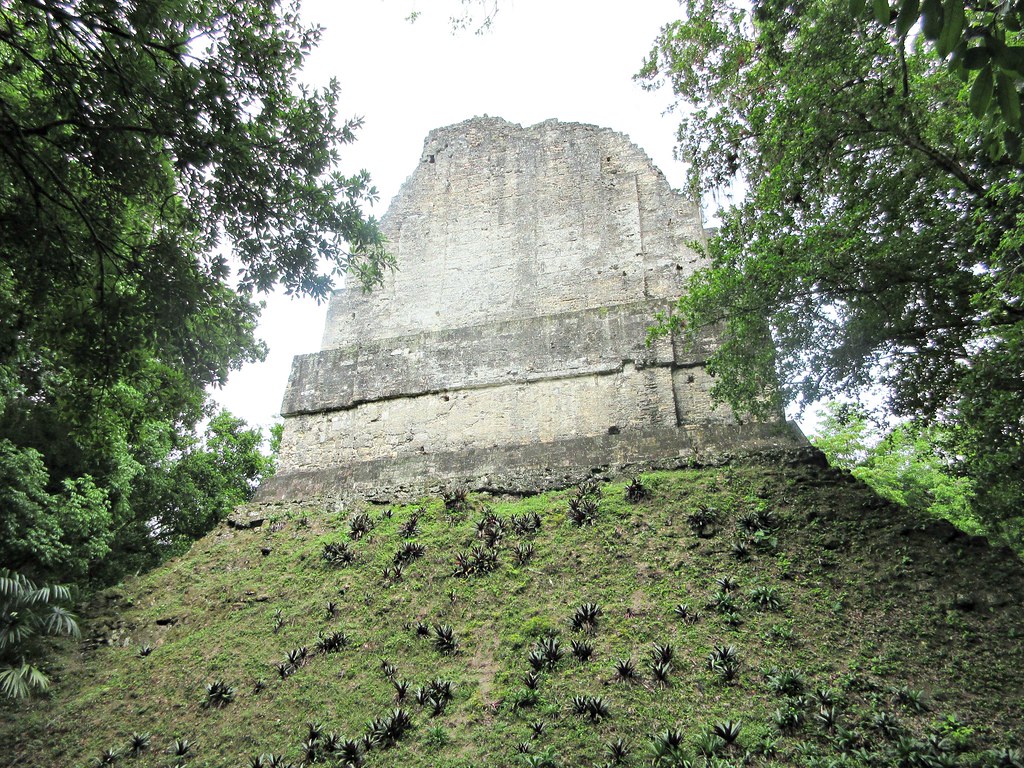 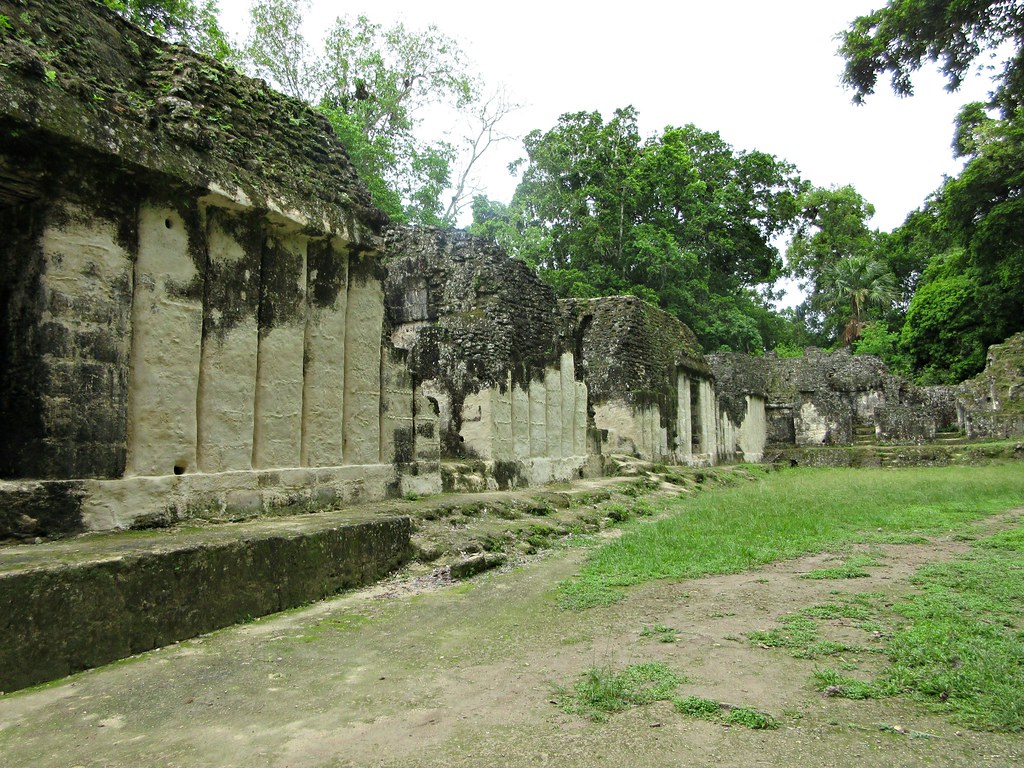 A pair of Hollar Monkeys swung by me here but I missed getting a picture of them. Too fast. But throughout my walk you could hear them in the jungle. 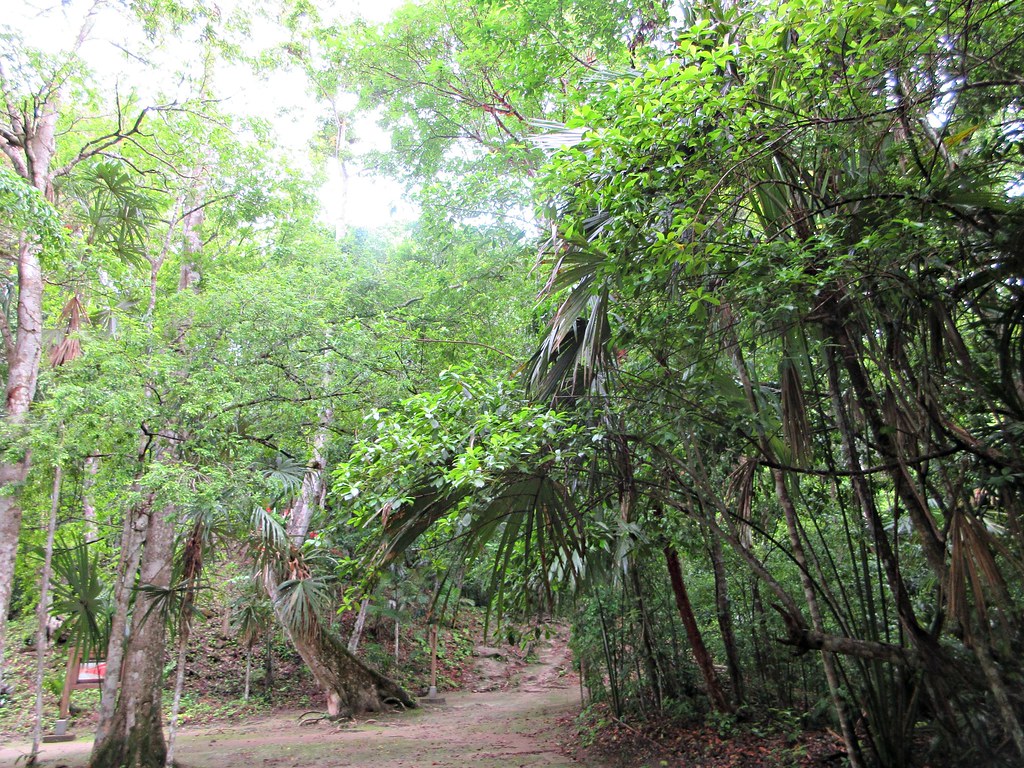 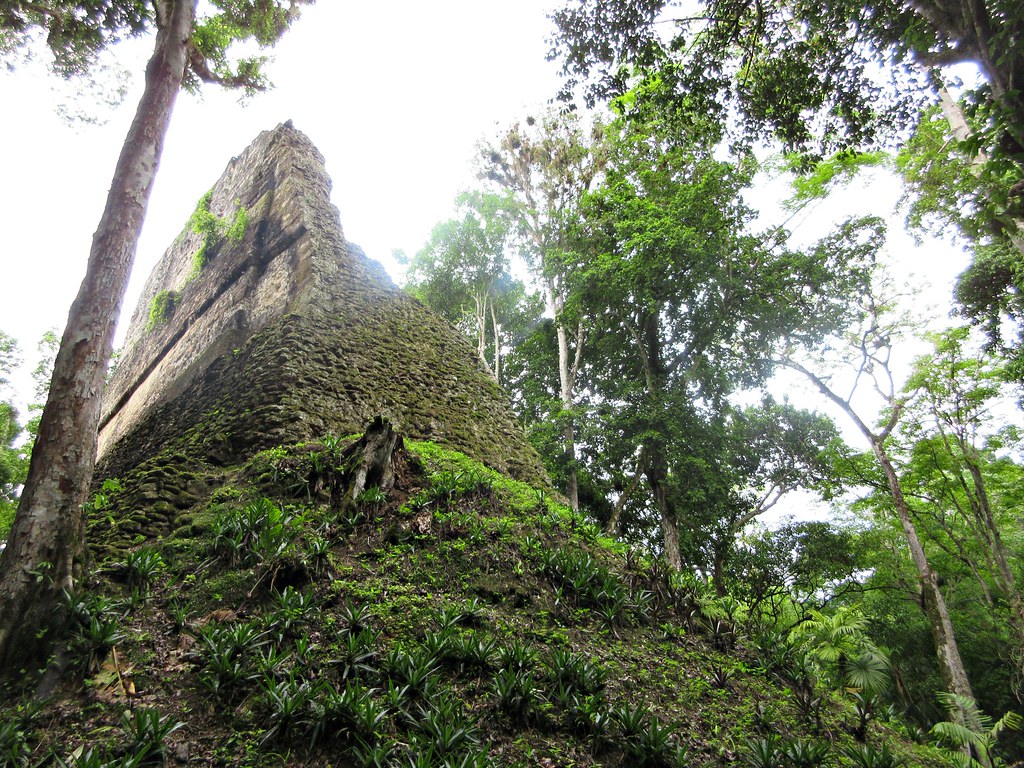 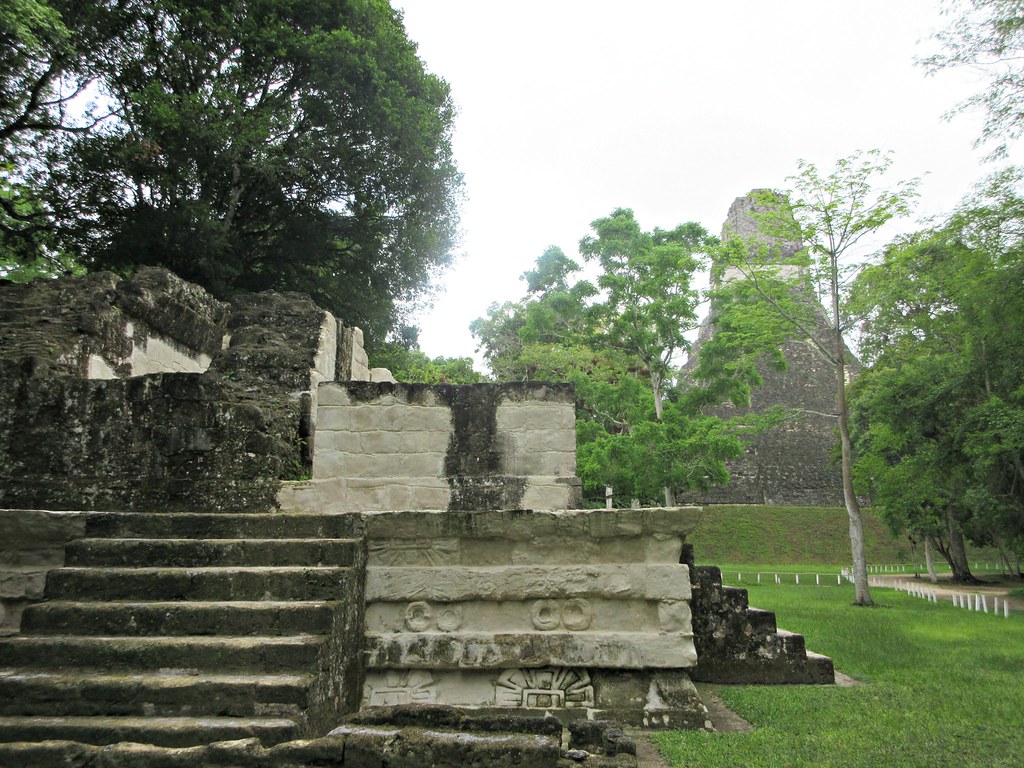 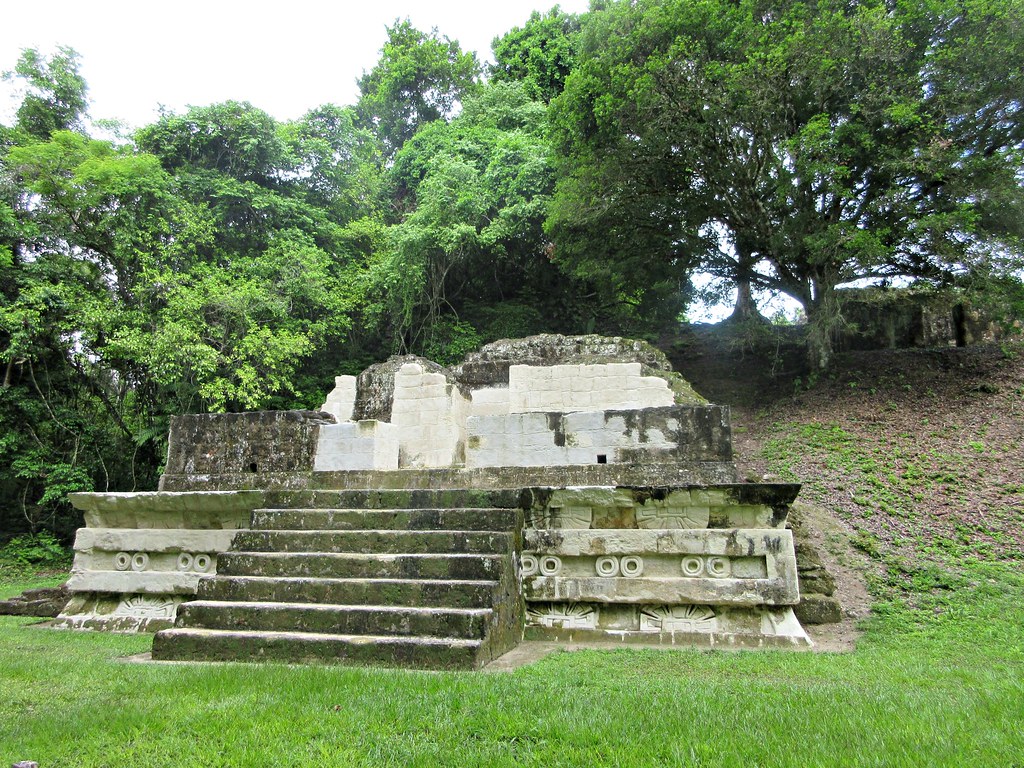 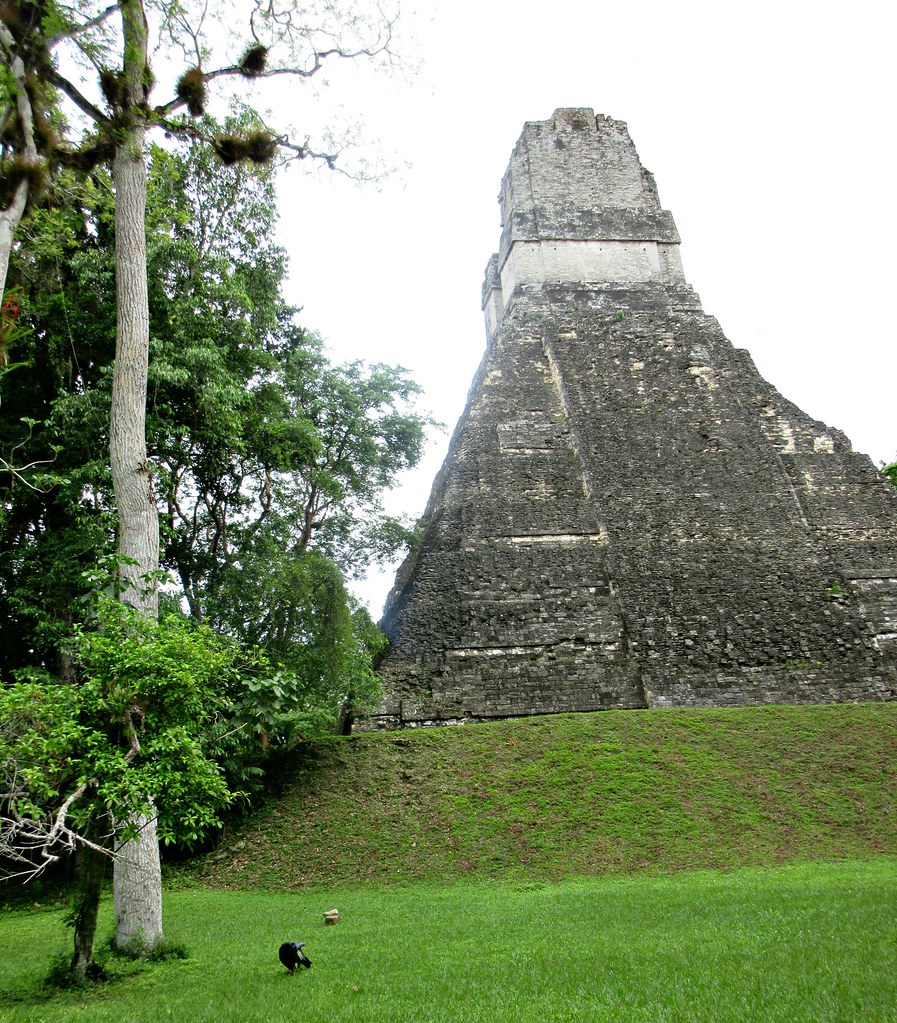 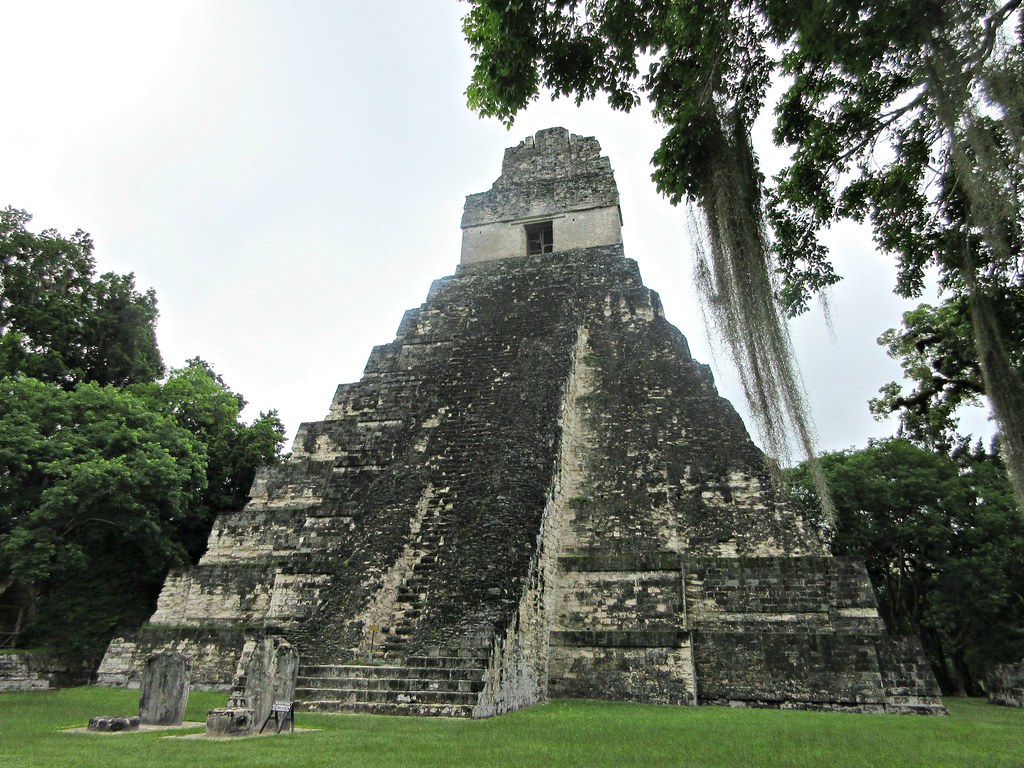 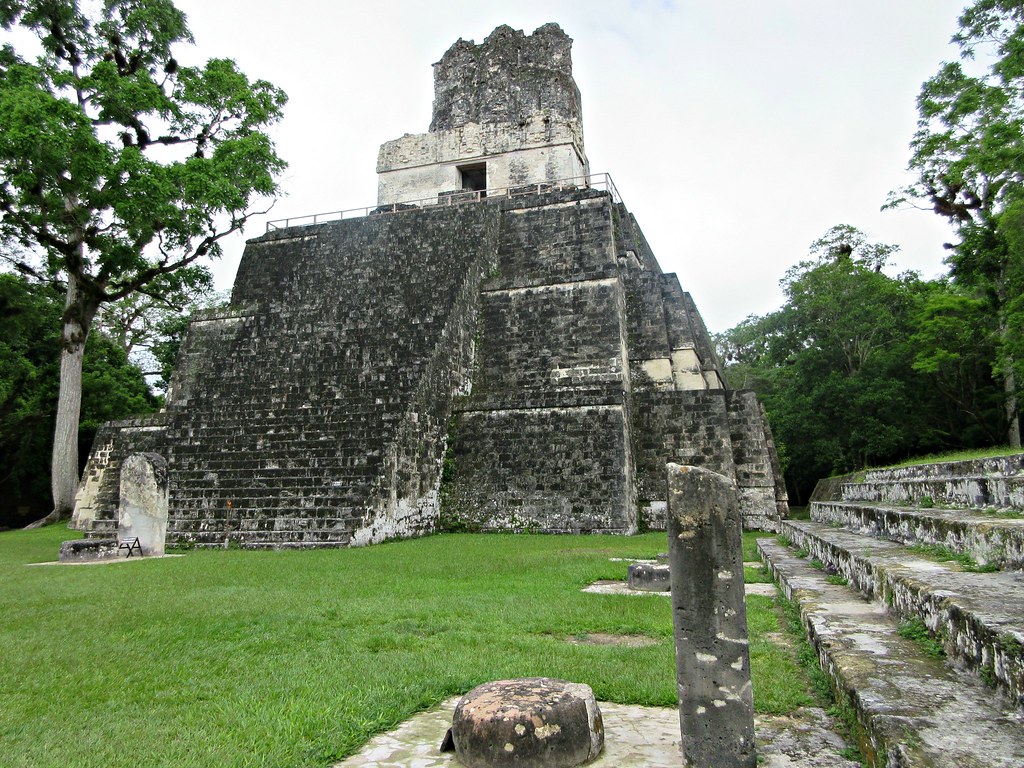 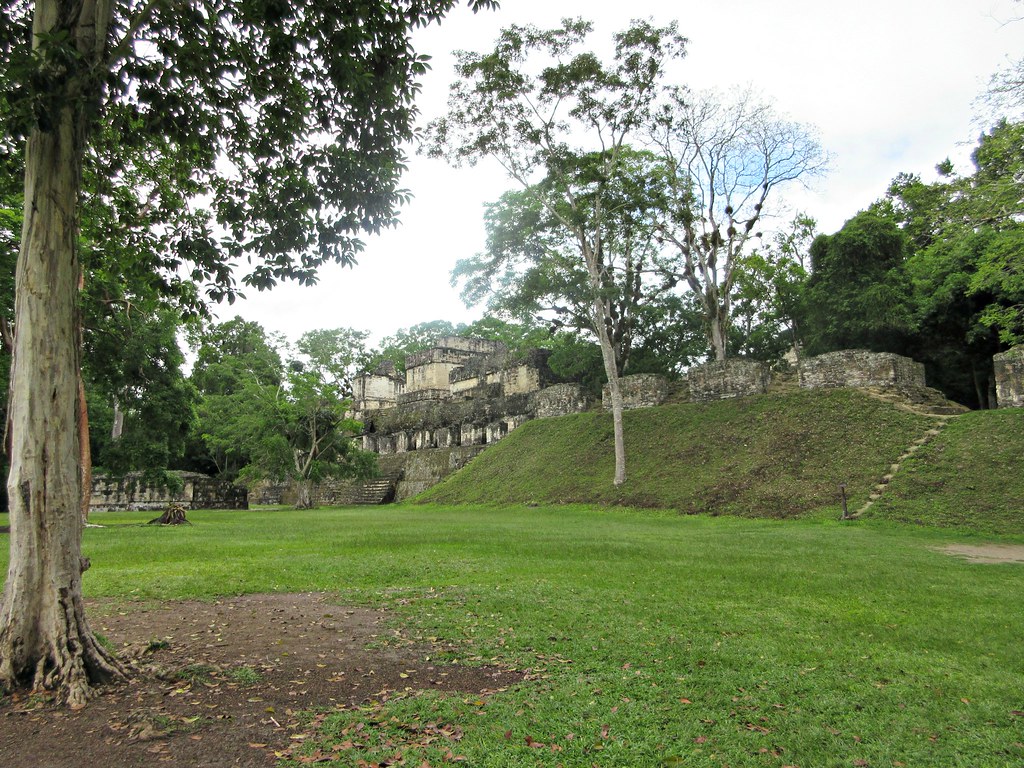 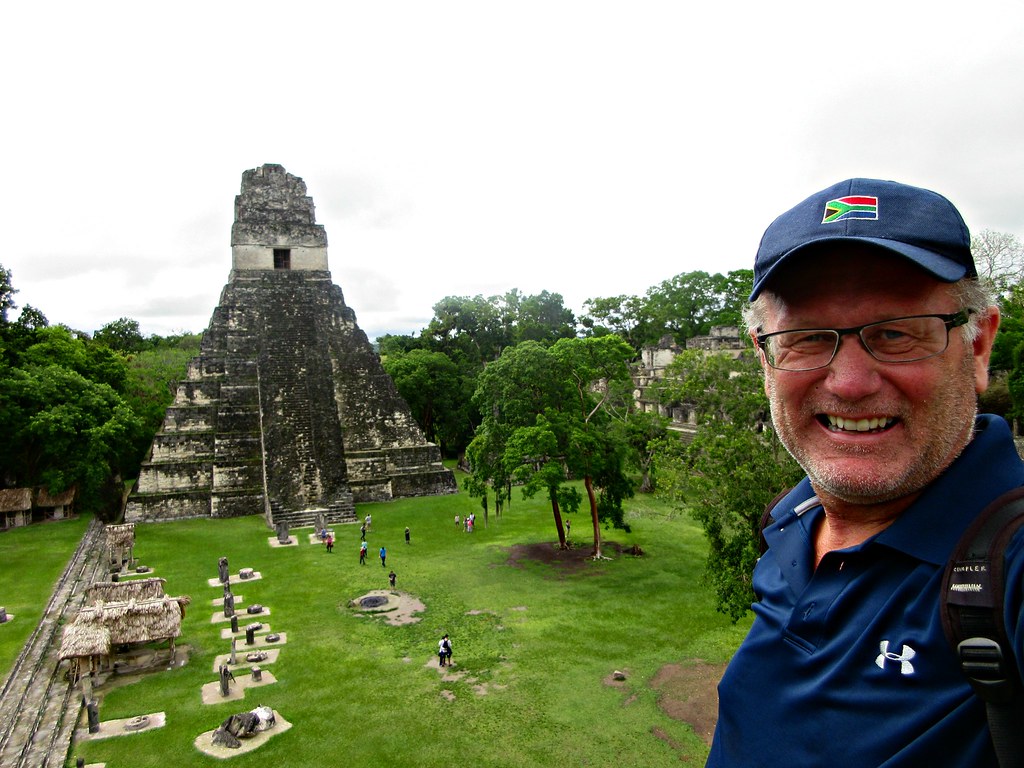 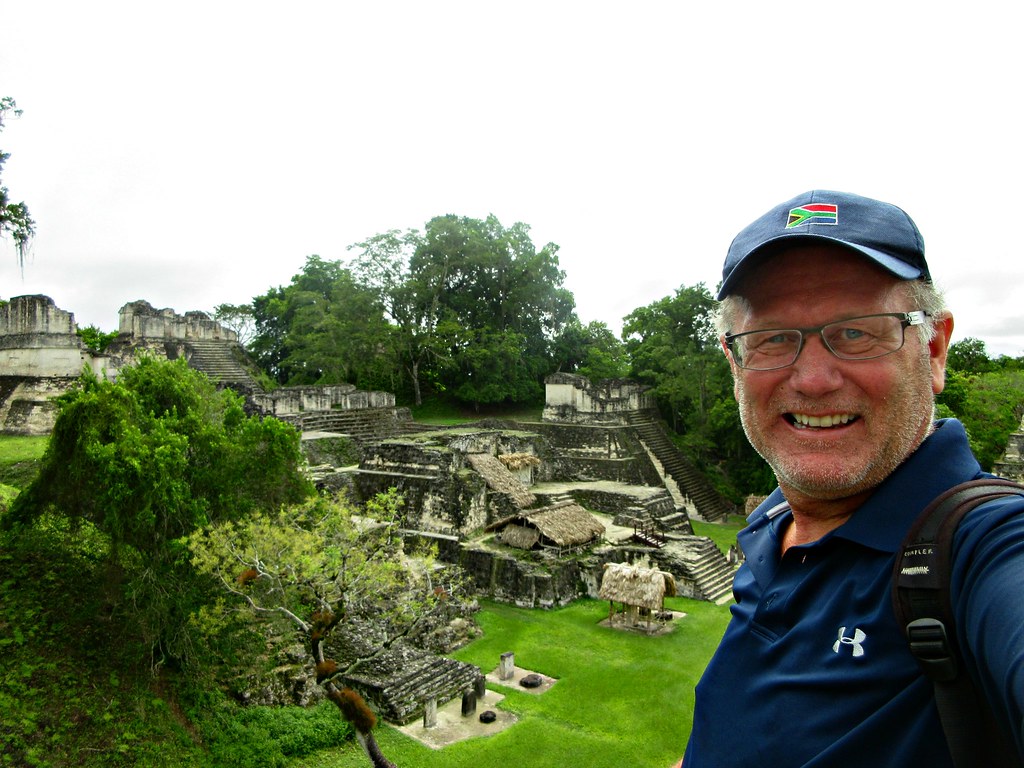 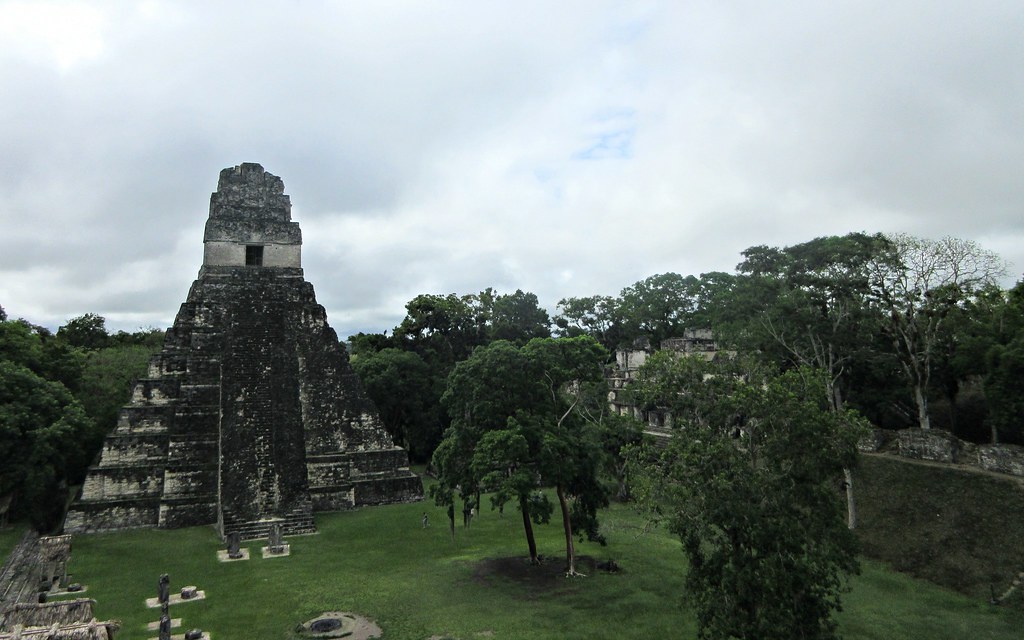 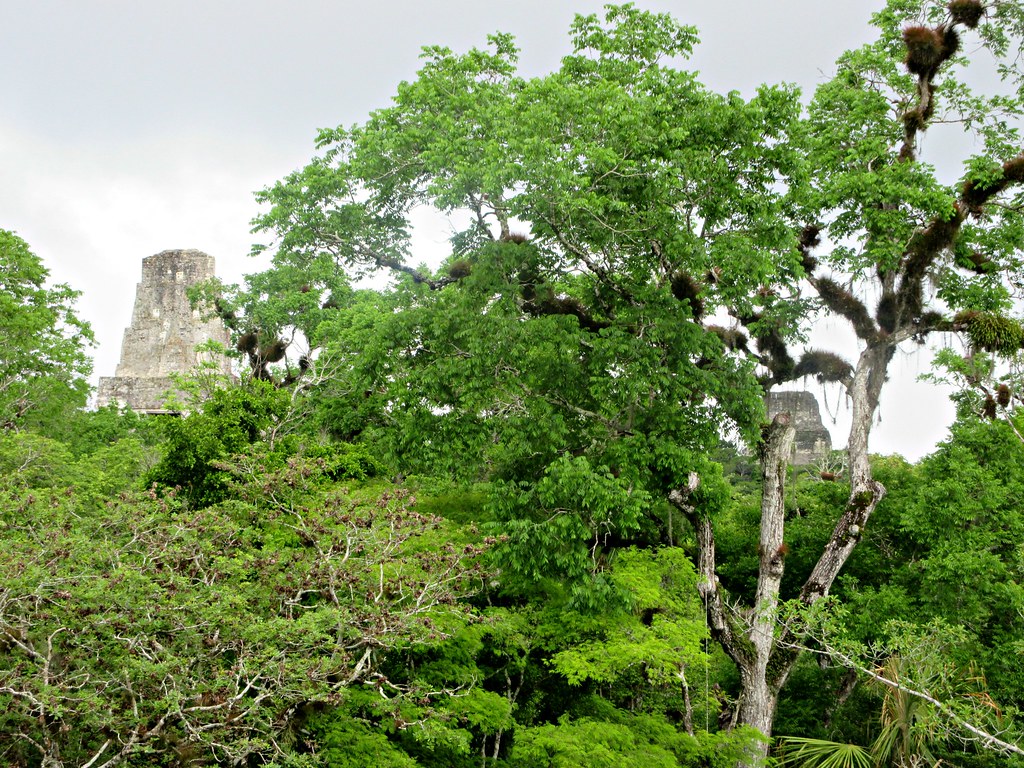 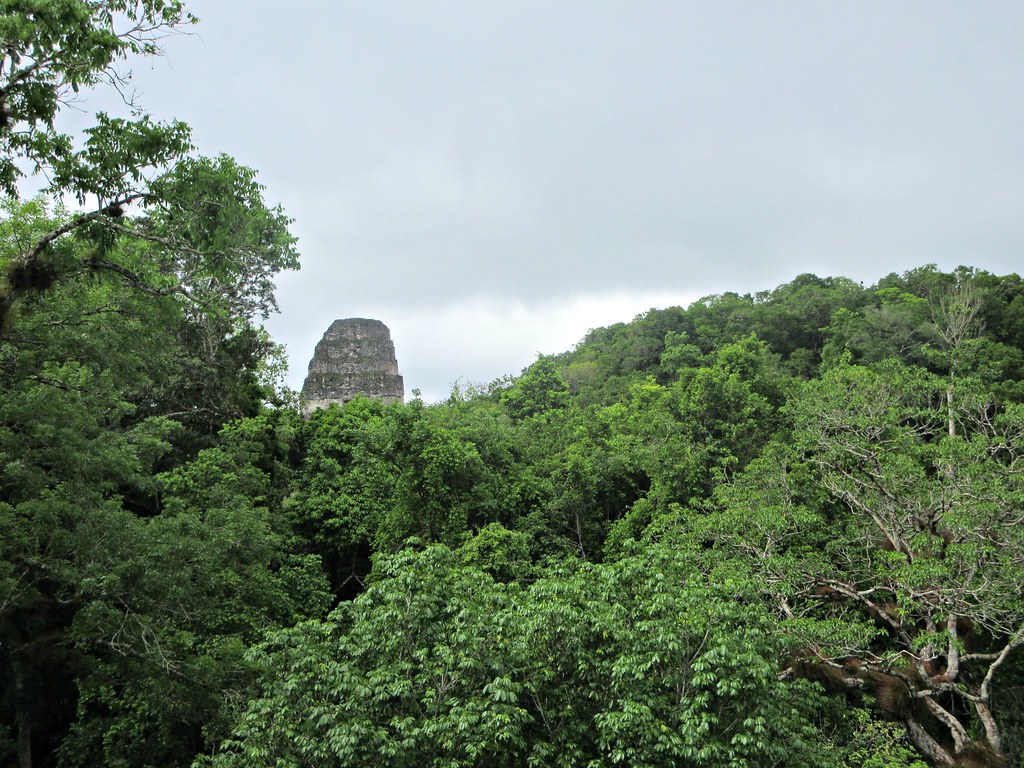 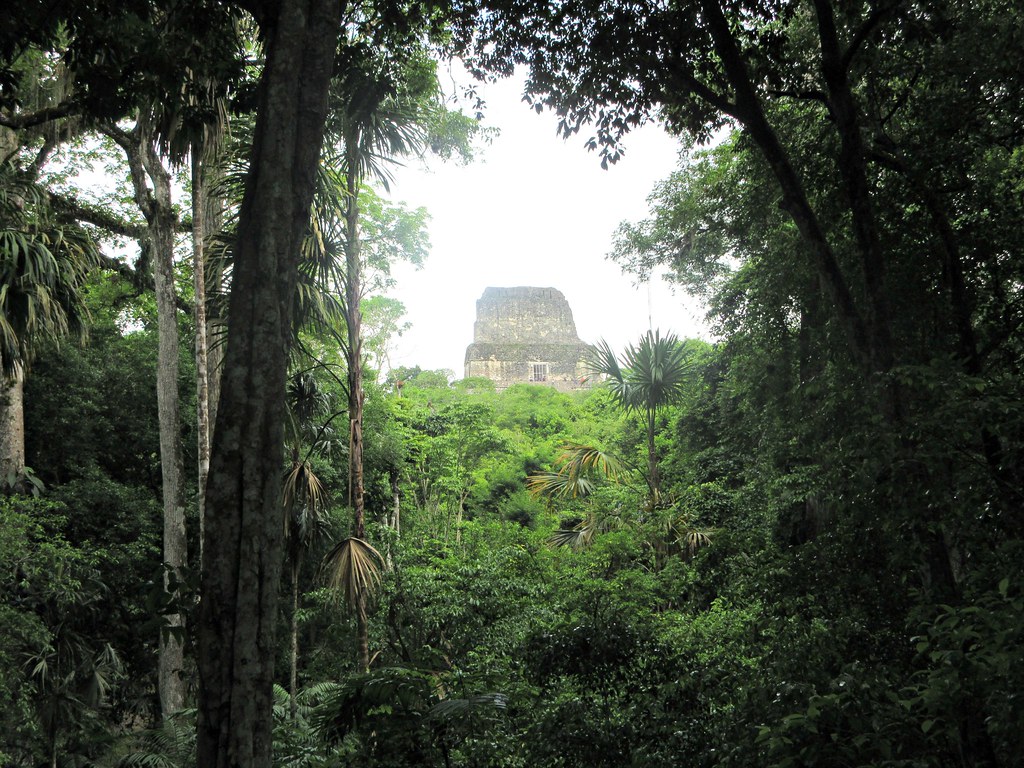 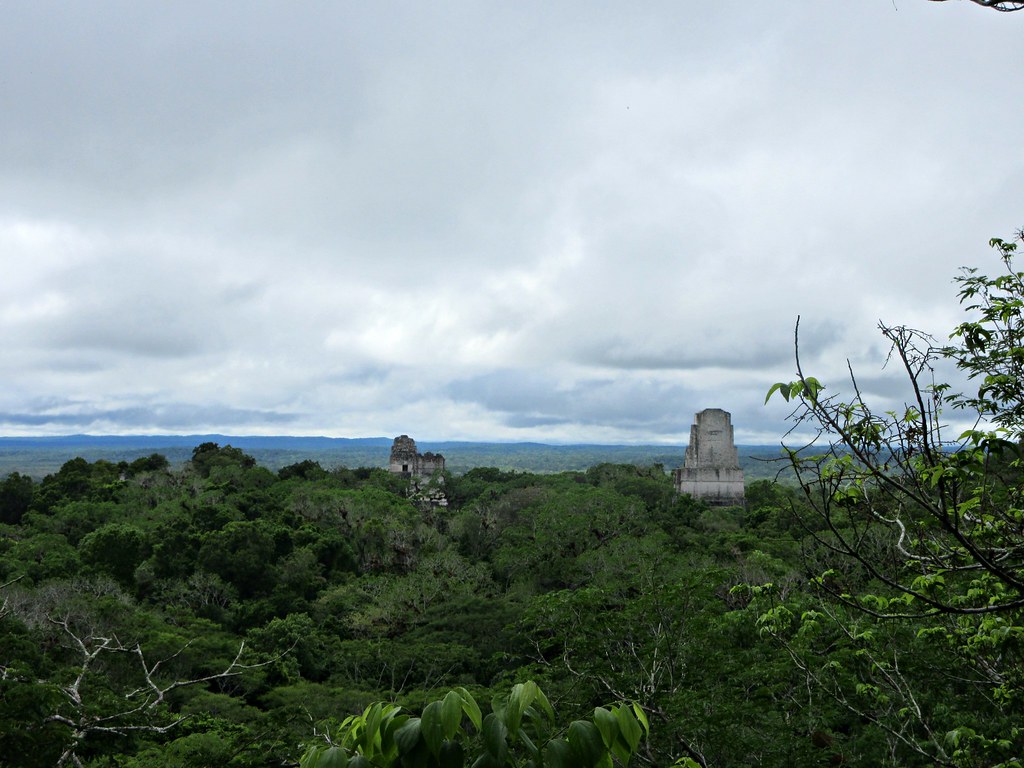 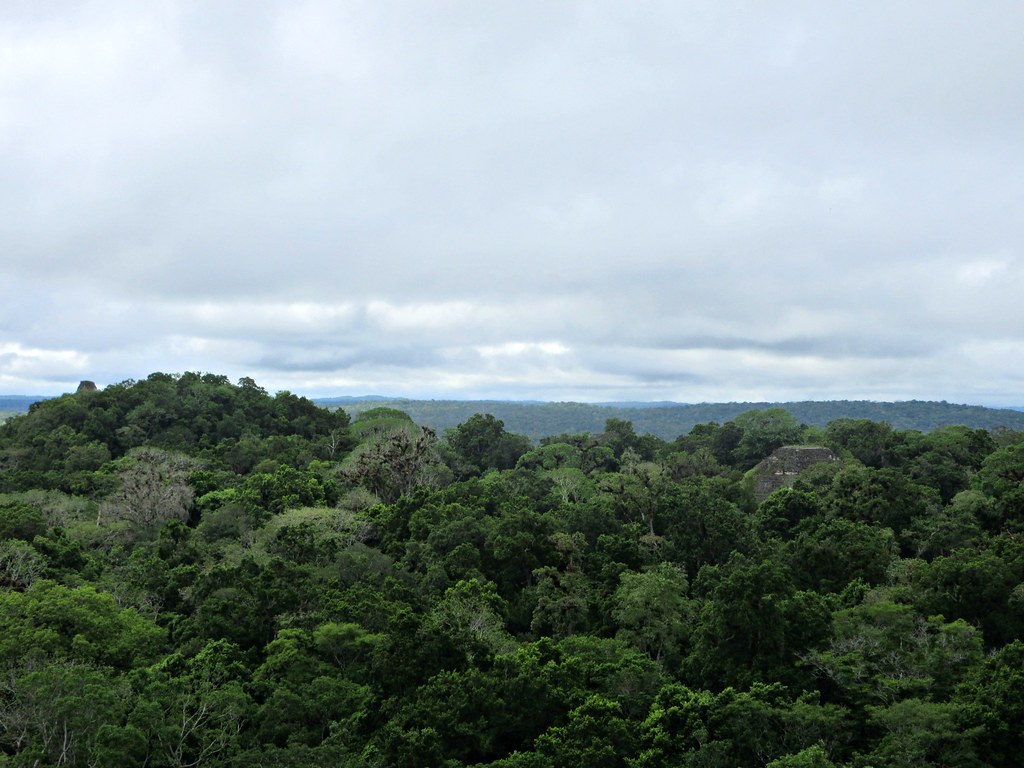 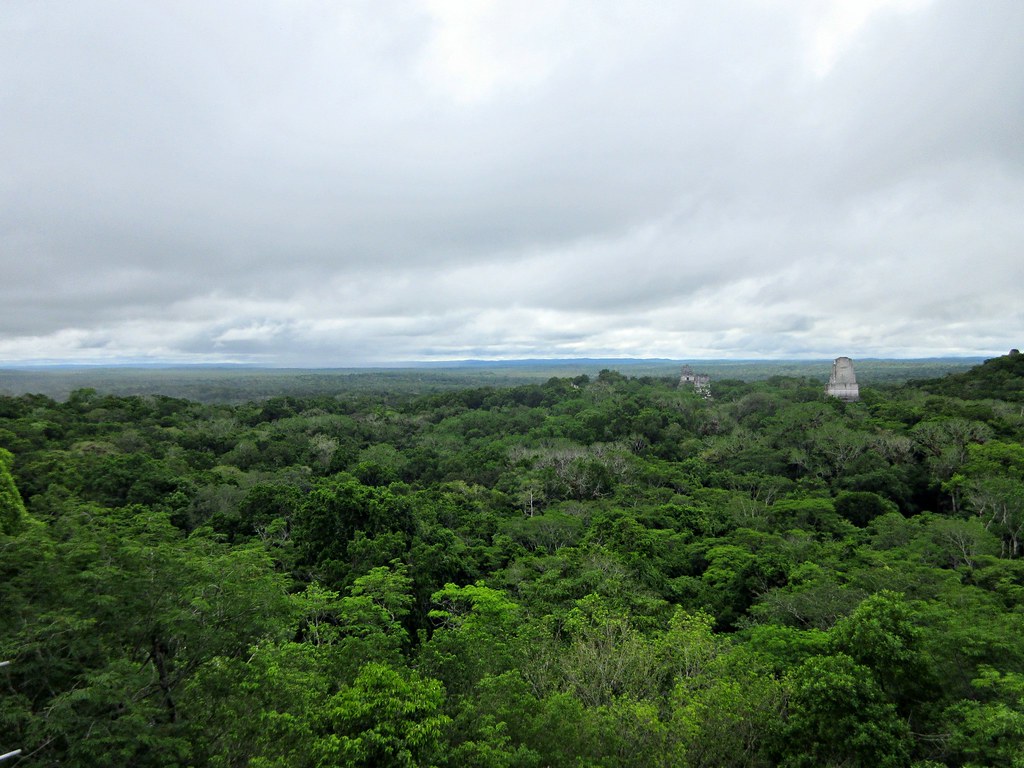 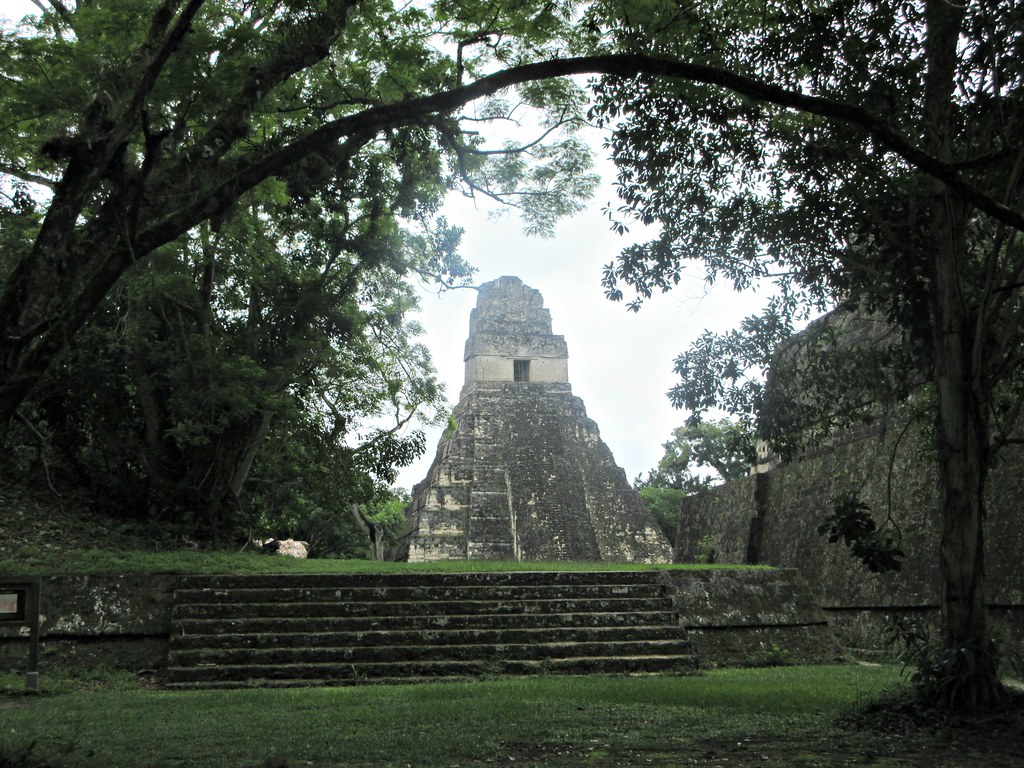 On the walk back home I spotted these animals. 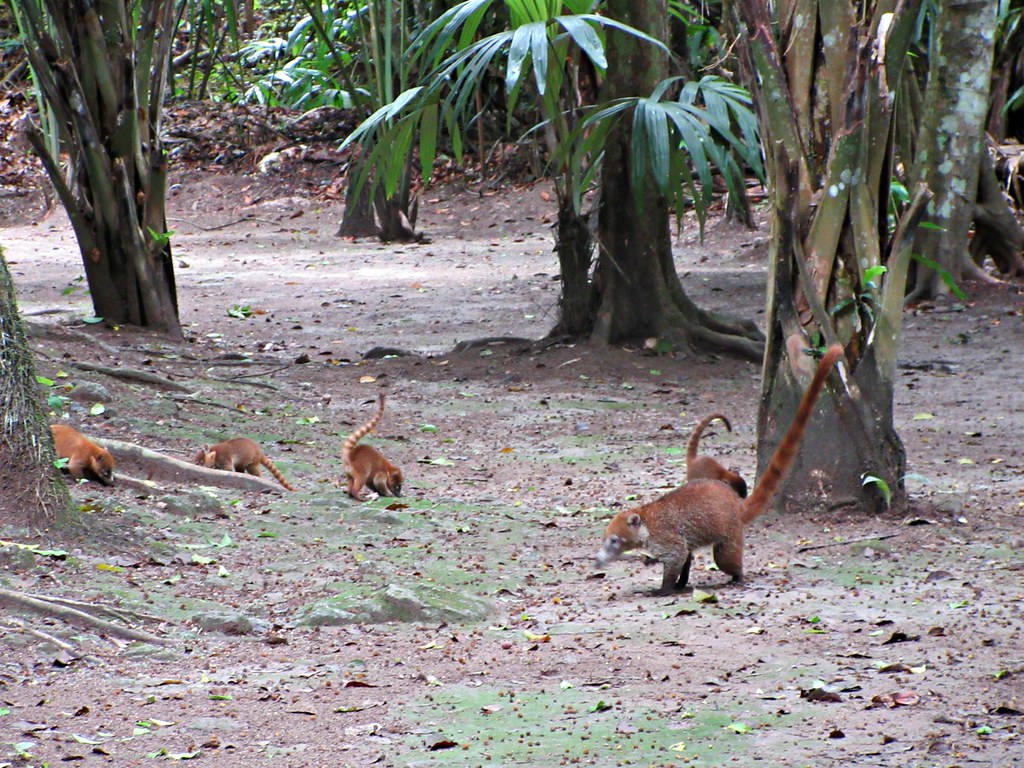 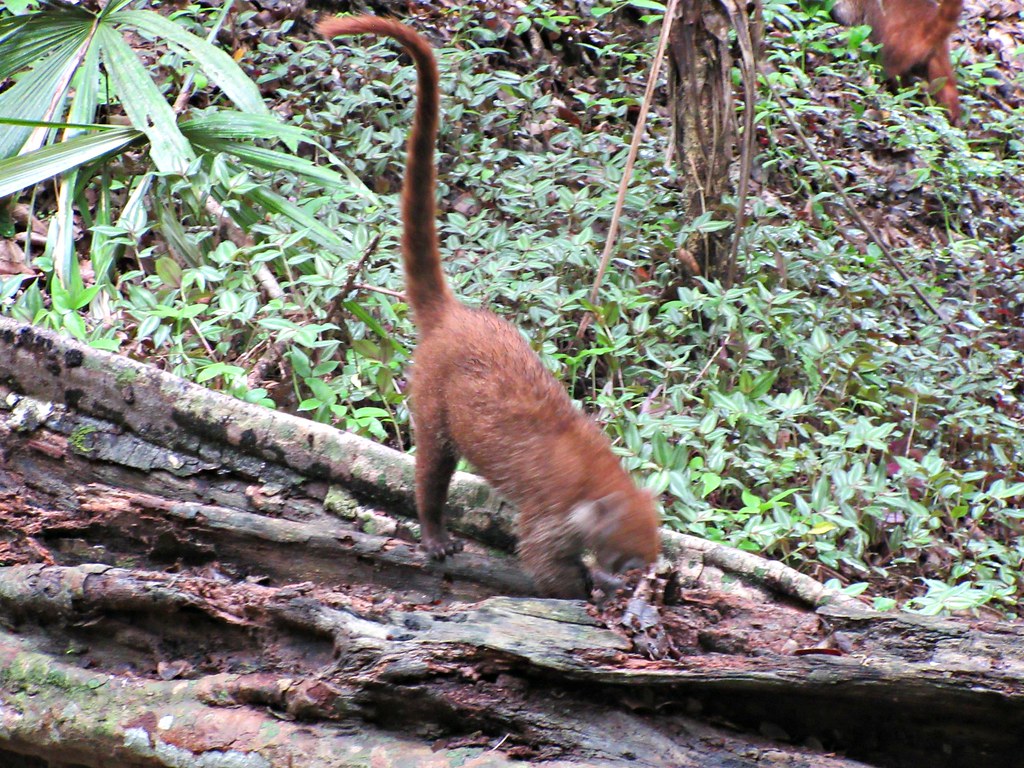 Once out of the park, I was walking across the parking lot and saw I wasn’t the only motorcycle adventurer here. 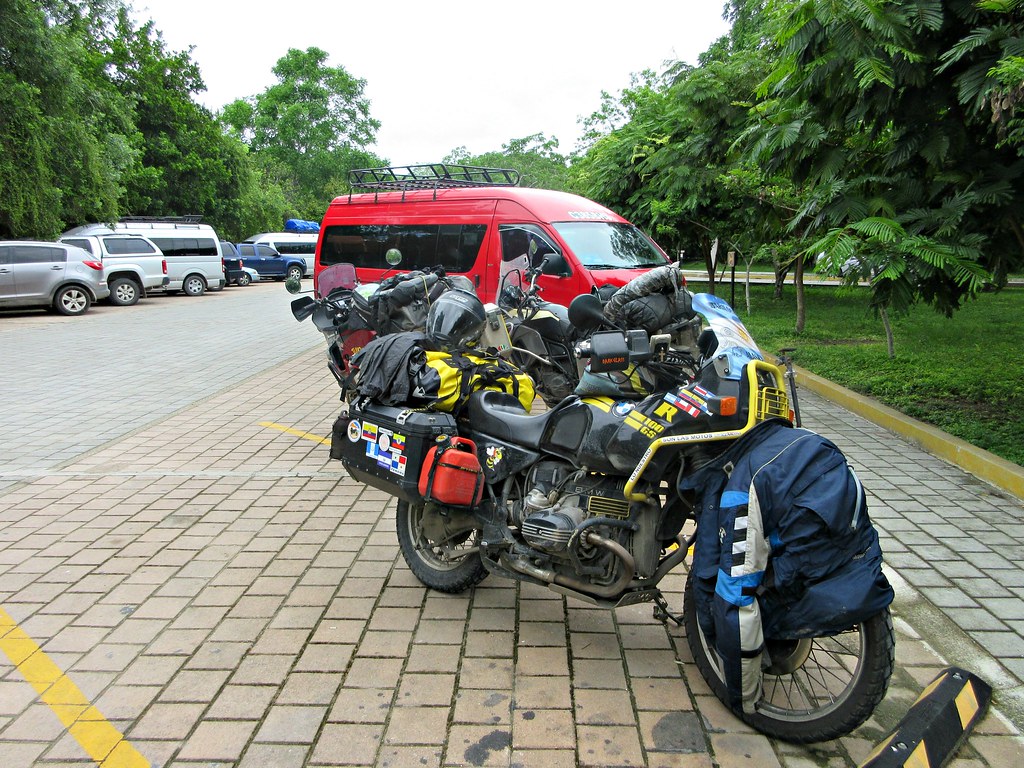 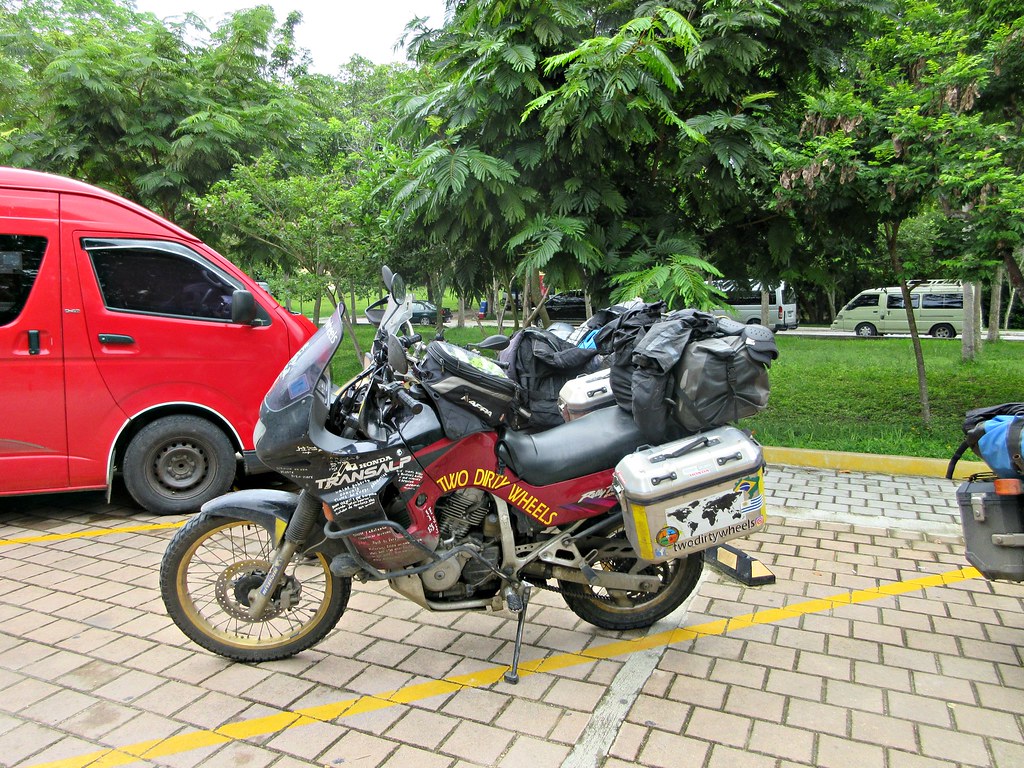 I spent 4 hours walking around the ruins without a guide. Perhaps a guide would have been better, but I am not really into Mayan history. Maybe I would be with a guide ha ha. But they are relatively expensive. So I just read up on Tikal instead.

I am not really much of a ruin person. For me, just being in the jungle and hearing the Hollar Monkeys was just as impressive.

The Tikal ruins were with the trip though. 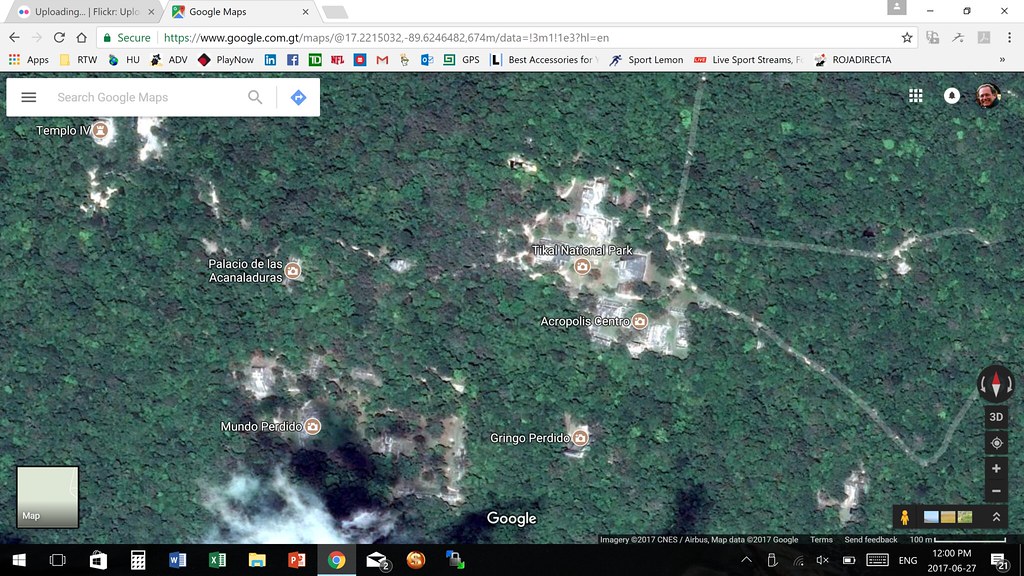