The goal today is to was to stop at Coco’s Corner on the way to Guerrero Negro. Easier said then down as it turned out.

Coco’s Corner is about 20 km off of Highway 1 on Highway 5. Now, calling Highway 5 a “highway” is pretty misleading. As I pulled off the paved Highway 1 I encountered a dirt road. It started off not too bad. It became evident, however, that is hadn’t been graded in a long while. The surface was corrugated and rattled me and my bike.

At one point I saw a smooth path off to my right that looked like others were using it to avoid the bone jarring road. It seemed like a good option at the time. I slowed and turned right down a small embankment and went to turn left to carry on down the smooth road. Well … it was smooth all right. I quickly found out it consisted of pure sand.

As I turned left my bike toppled over 🙁 along with me. Should have taken a picture. But the last thing I was thinking of was taking a photo. I just wanted to get my bike up. Especially when I saw a car coming in the distance. I wanted to save some pride ha ha.

I quickly took off my dry bag and tank bag to lessen the weight. Then, with my butt against the seat I grabbed the handlebar and rear rack and used my legs to raise my bike up and put down the kick stand. I was on my way again. But this time back onto the corrugated road.

As I continued on I could see they were building a new road to my right. I encountered a few construction camps and a few graders smoothing out newly dumped dirt on the road. This dirt contained large rocks. The road now had corrugations, large rocks, and pot holes grrrrrrr. Negotiating the new dirt wasn’t too bad. However, at one point I came across old graded dirt that I could tell was soft and looked like powder.

I sped up a bit to get through it. As I hit it, the dust was flying, and my bike swerving. It was like a giant bowl of dust over rocks or something underneath that I couldn’t see. Of course, my off road skills are not great and that doesn’t help. Down I went. This one really ticked me off. Mostly because it covered me in dust. And I was tired from picking up my bike the first time.

Again, I should have taken a picture. But again I was ticked. Next time, and I am sure there will be one, I will take a picture before picking the bike up.

Now I was filthy dirty. I was thinking that I needed to come back this way again 🙁 And I debated about turning around. But I was focused on reaching Coco’s Corner. 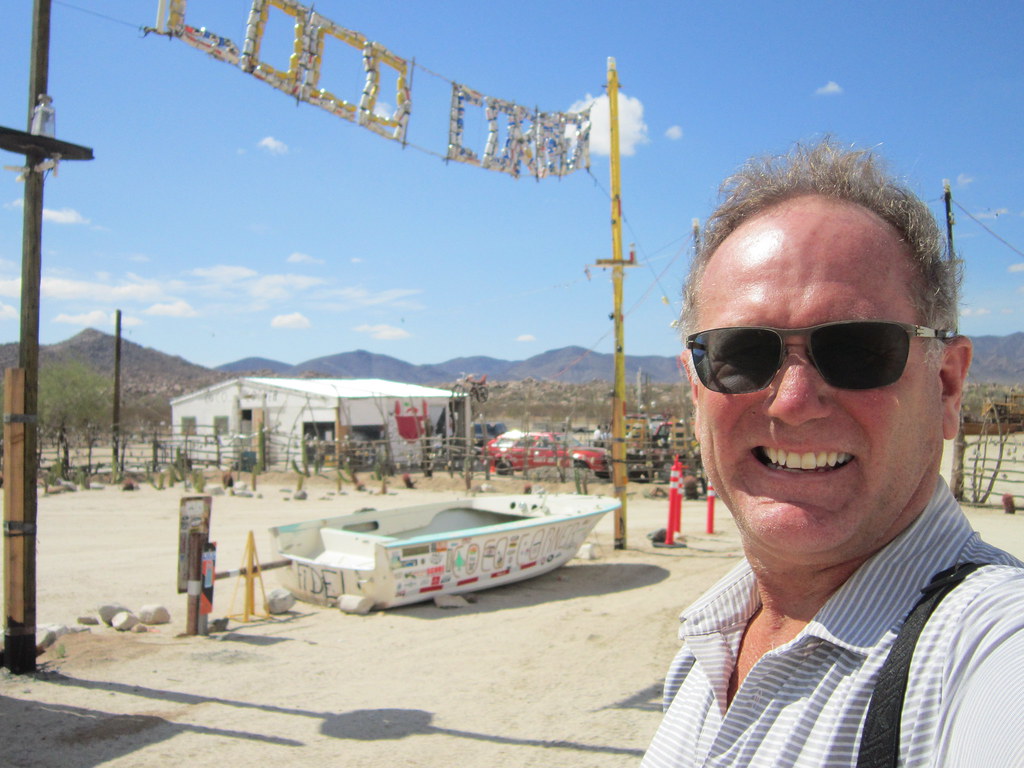 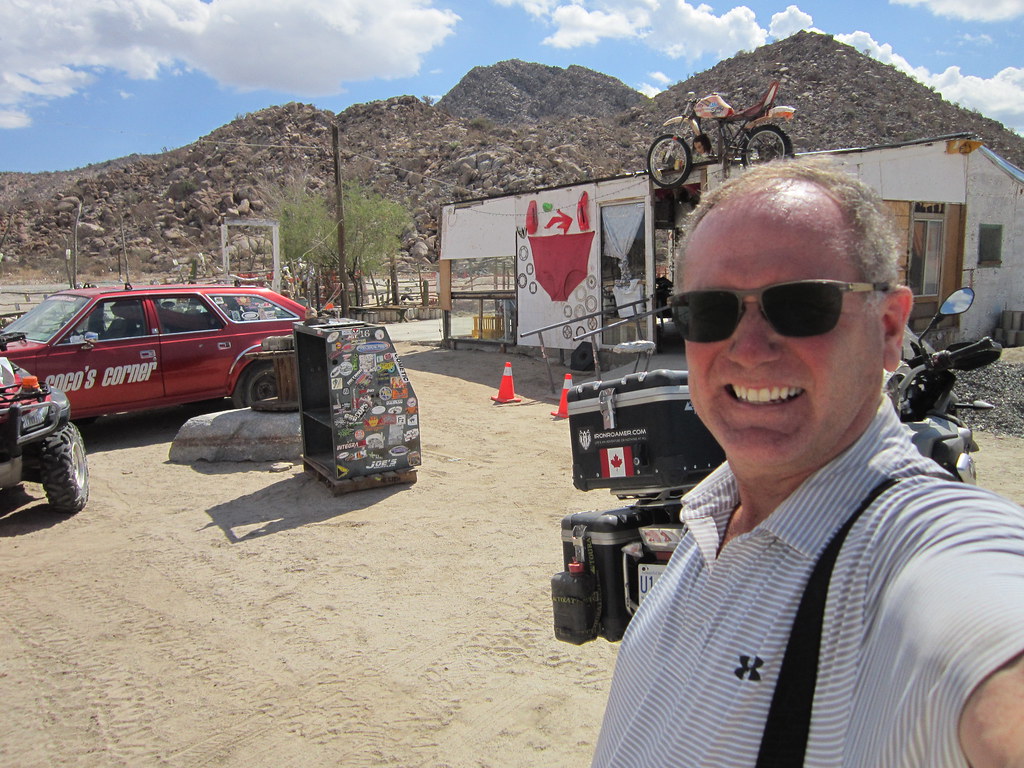 Henry Corrales “Coco” and his Coco’s Corner is legendary in the overland adventure community and beyond. You will even find the small outpost on maps. It is one of the most frequented roadside stops in the Baja.

Technically it is at a “major intersection” along Highway 5 about 20 km from Highway 1. But really it is in the middle of nowhere and miles from pavement.

As I pulled up I could here a voice from inside the building welcoming me in. It was Coco. Now Coco has both legs partially amputated due to diabetes. He gets around on a wheelchair.

In the middle of the room is a cable spool as a table. In one corner is a bed. The walls are covered by stickers and business cards. And the ceiling? It is covered with his famous collection. 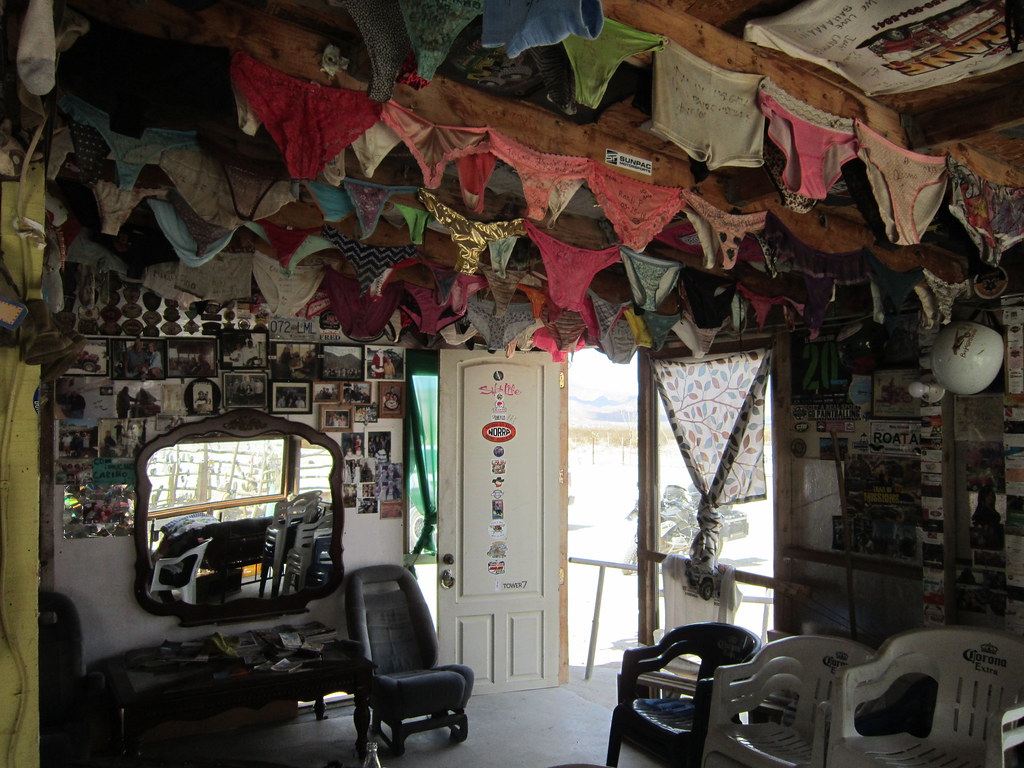 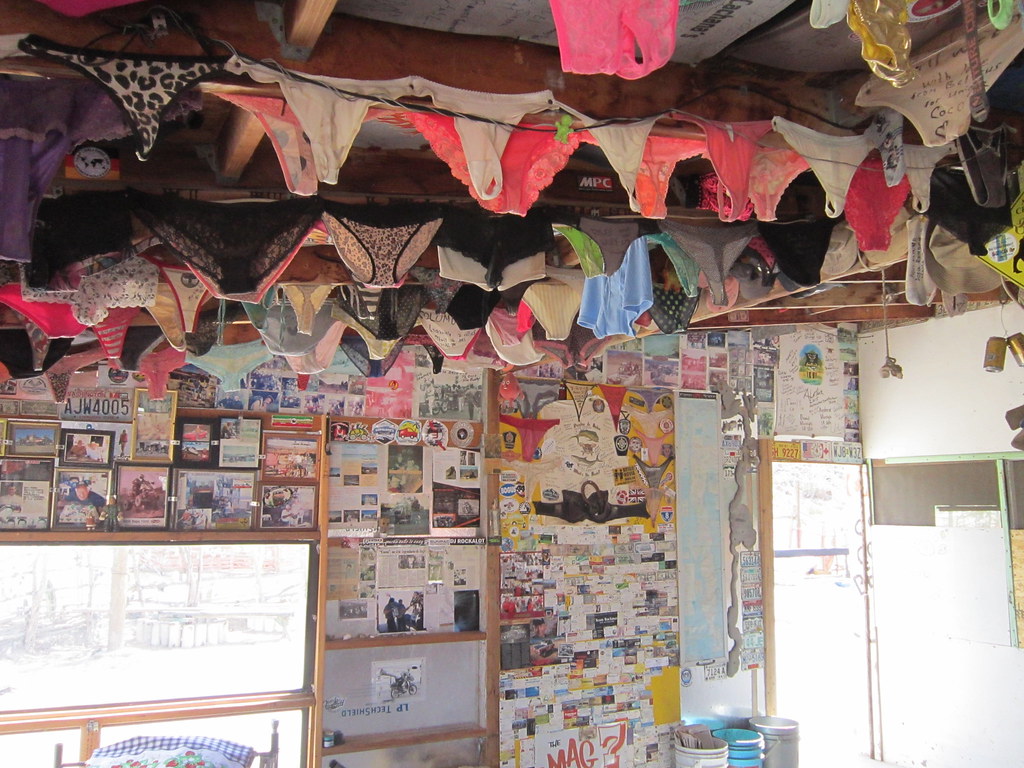 I bought a coke from Coco which was one of the best Cokes I have had, Man it felt good after the heat and dust. And I signed his guest book which he gets everyone to do for years now.

It wasn’t long before others showed up and I explored Coco’s “yard.” You can camp here if you want. 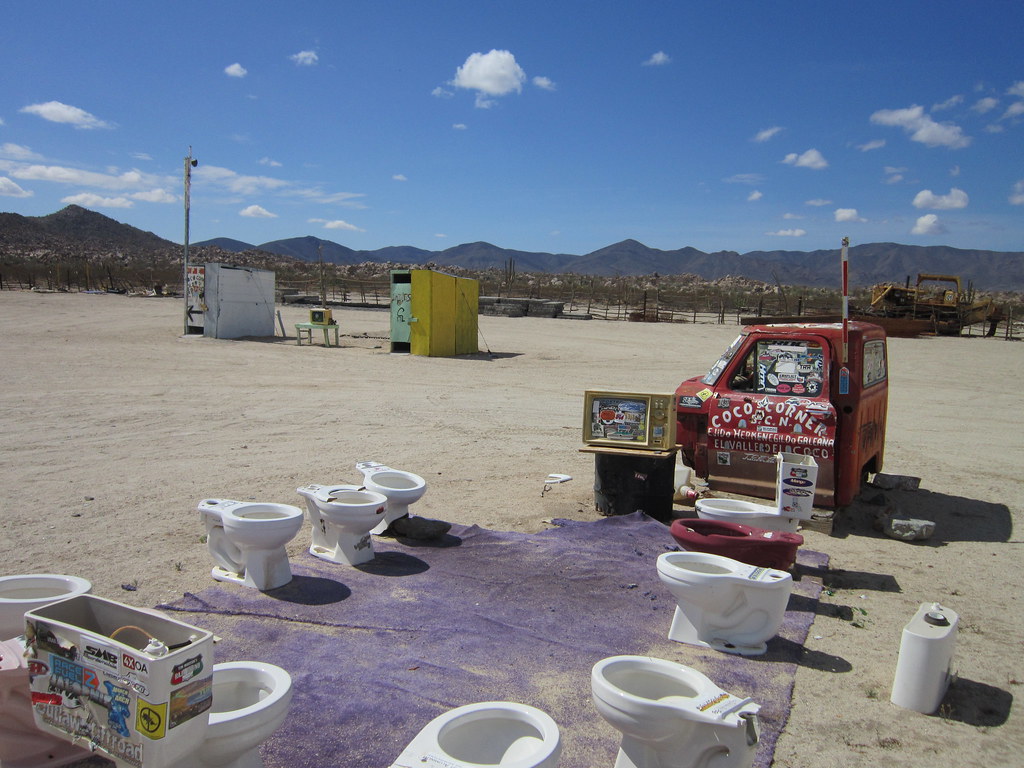 One last photo before heading back. 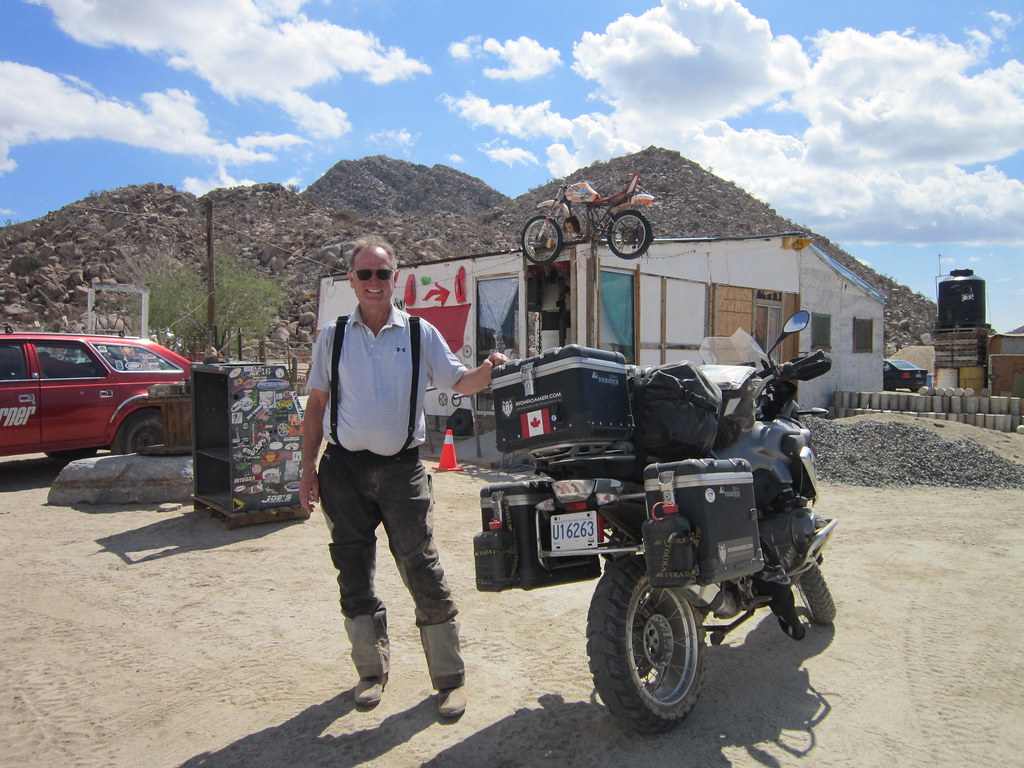 Apparently the road under construction will be a paved road and will by-pass Coco’s Corner. I don’t think that will stop people coming here though. I do wish they had the paved road finished by the time I left ha ha. No such luck. Back I went.

This time I was determined not to fall. The road seemed so much easier heading back. No falls! Made it easy through the dust bowl 🙂

Highway 1 has it spots of interest, like the boulder field. 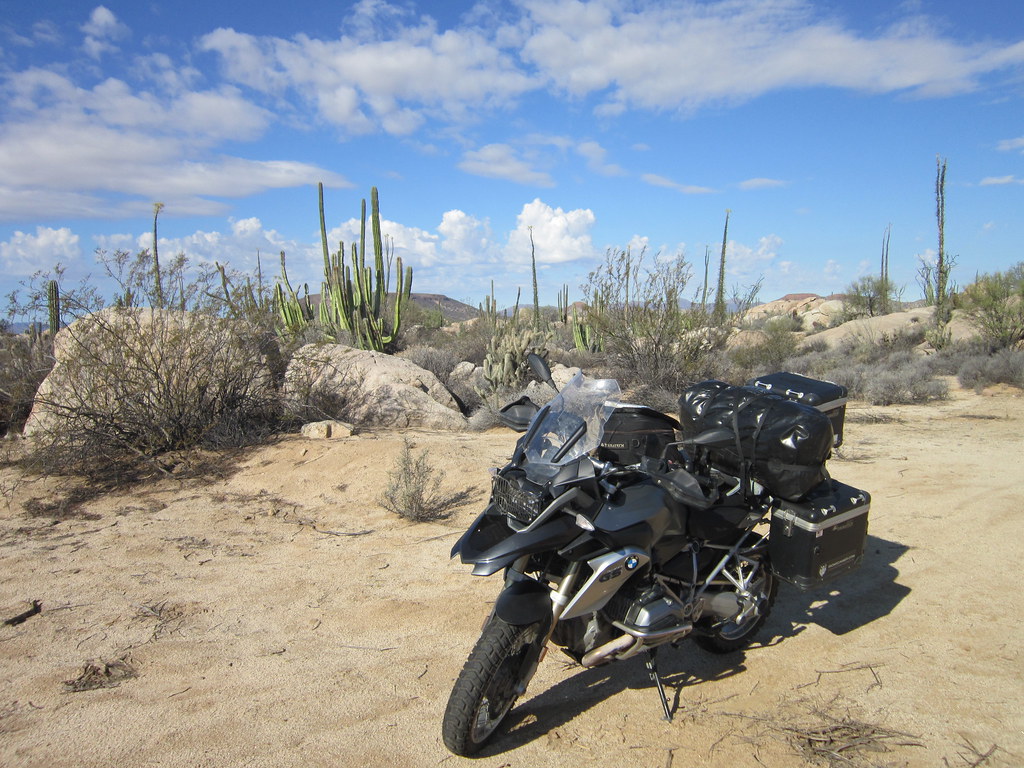 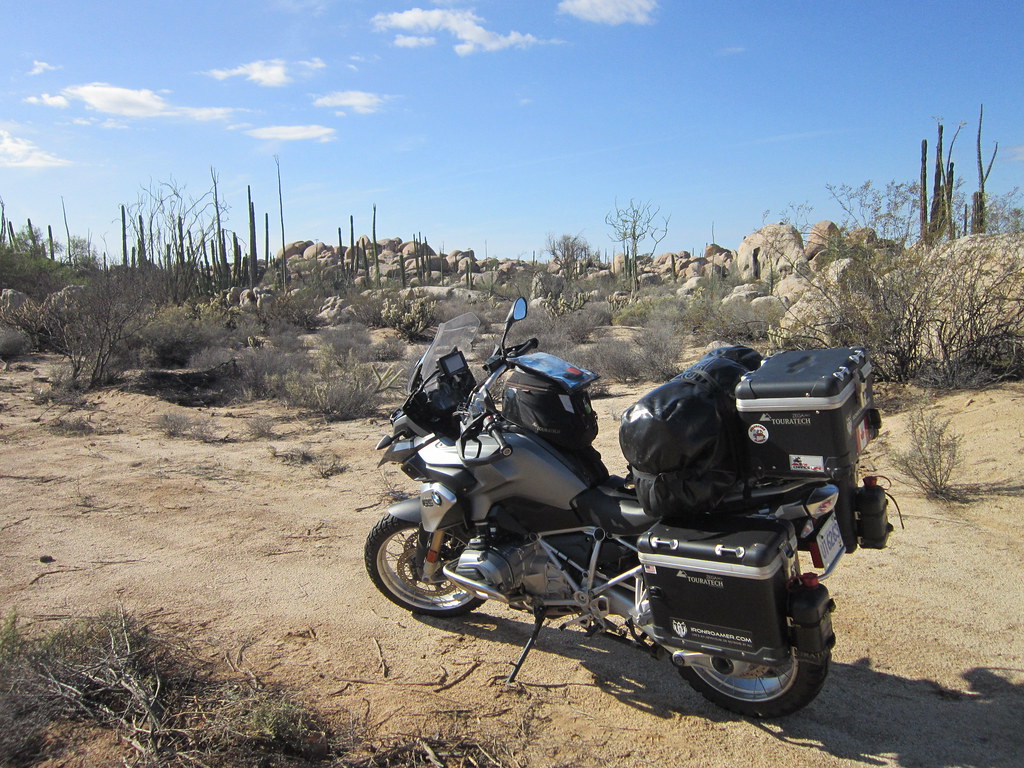 Mostly though all you see is cactus and brush. 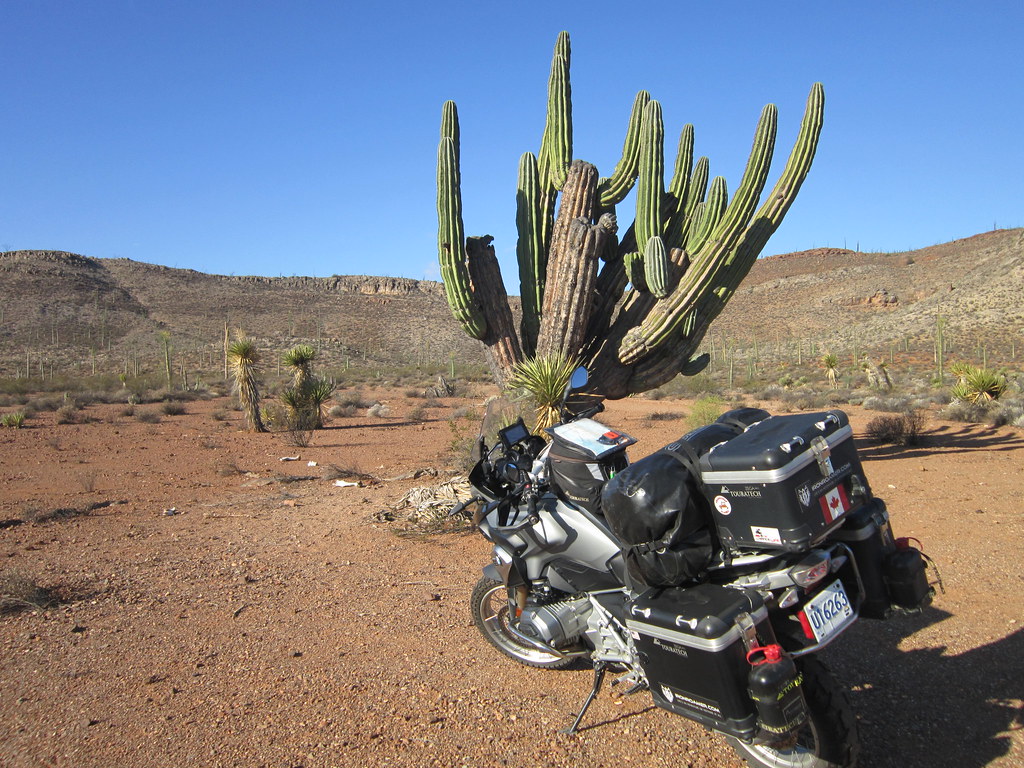 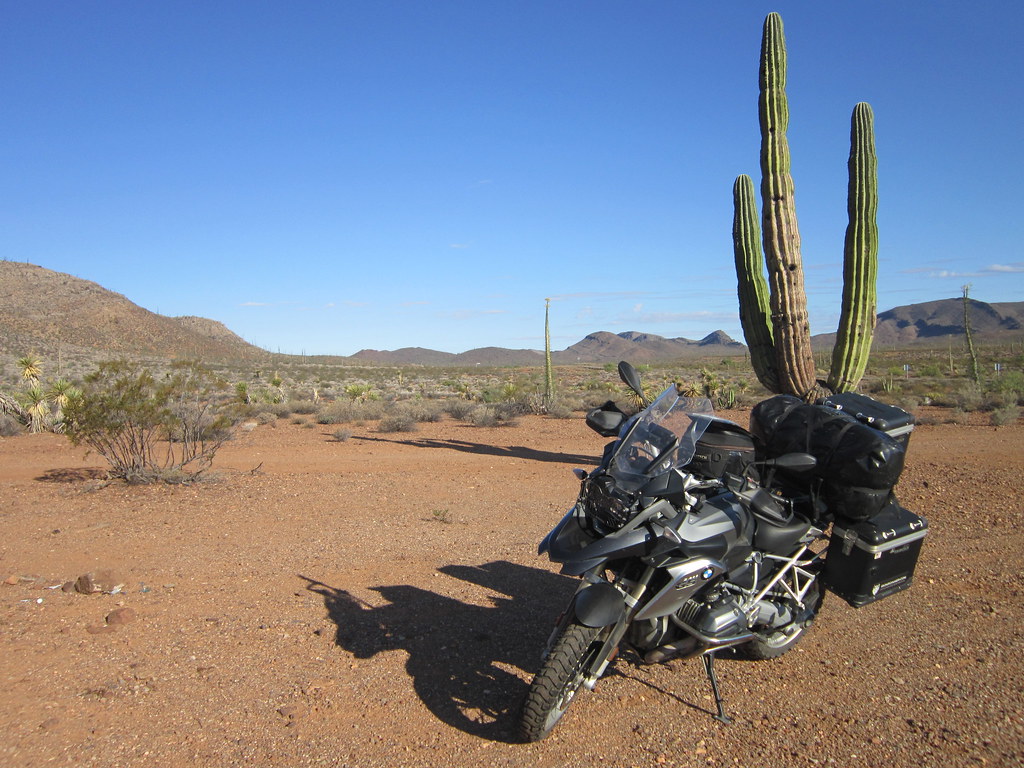 It was a long day as I pulled into the next major town along Highway 1, Guerrero Negro. Not a pretty town from what I saw anyways. I had already picked out a hotel, Hotel Malarrimo, from doing some research. It reportedly had one of the best restaurants in town and I wanted a good meal. So nice to finally arrive. 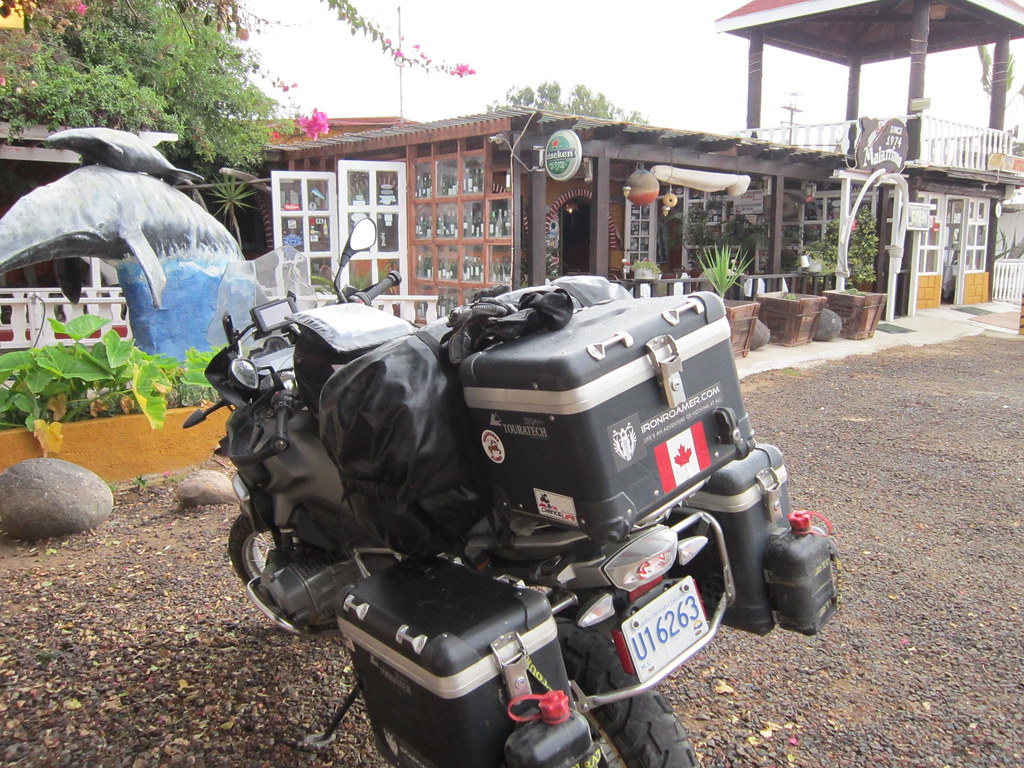 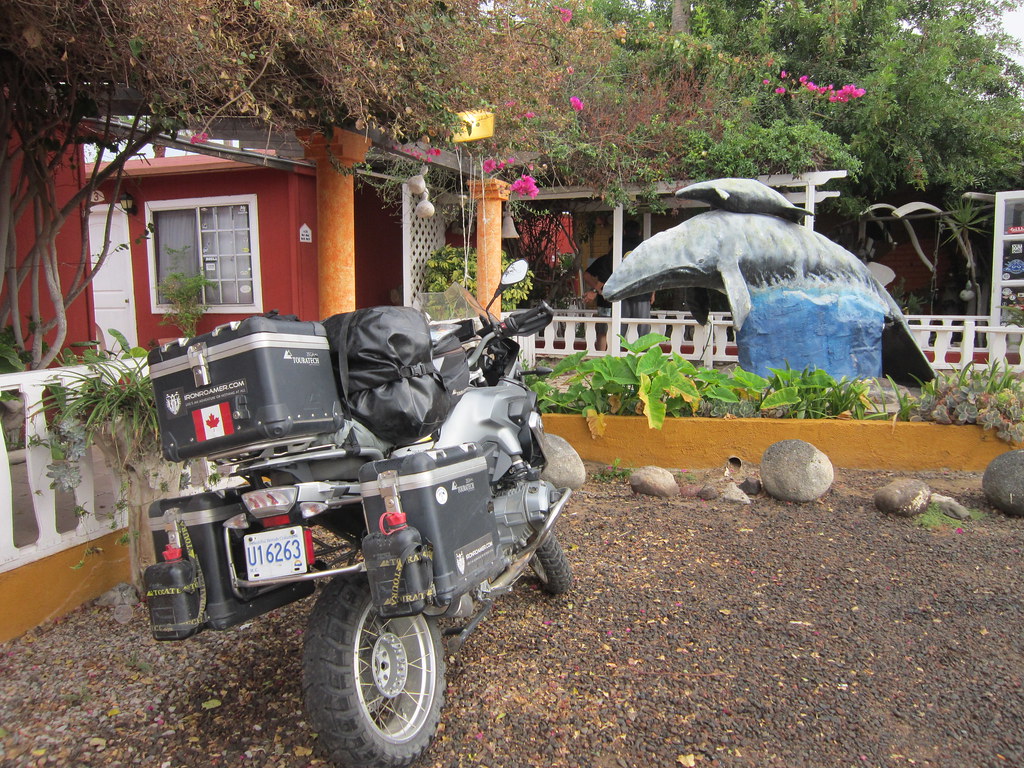 The hotel was basic but not bad at all. After a shower I went to the restaurant where I sat alone with my beer, salad, and chicken tacos. 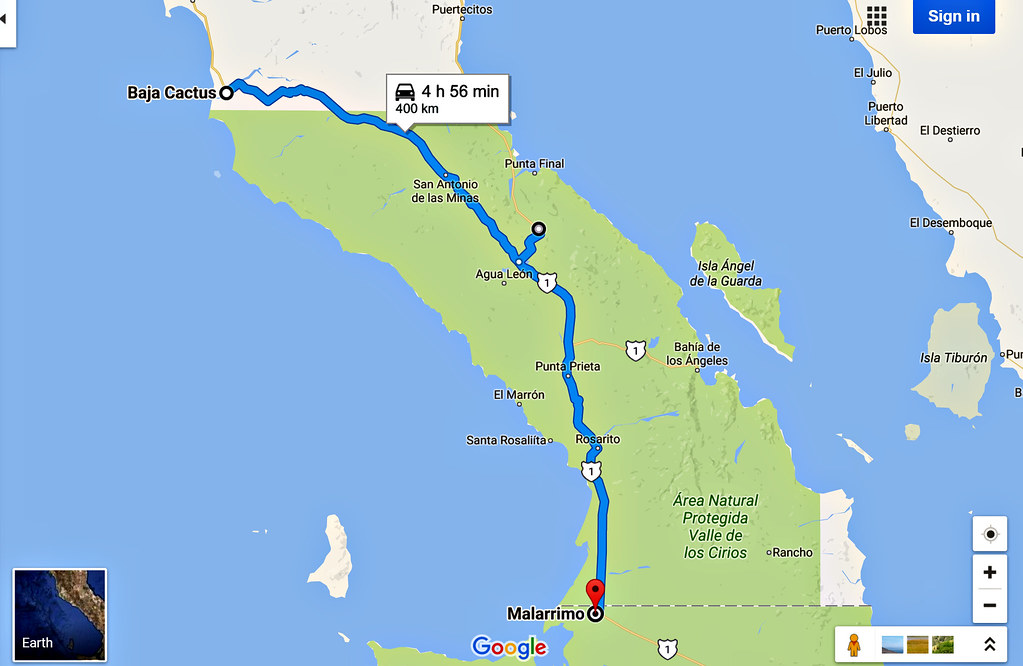