After visiting Chichen Itza I booked another two days in Merida. The reason for this is because I wanted to go to Cuba and the only flights out through Interjet were Thursday and Sunday. My time in Merida was relaxing. 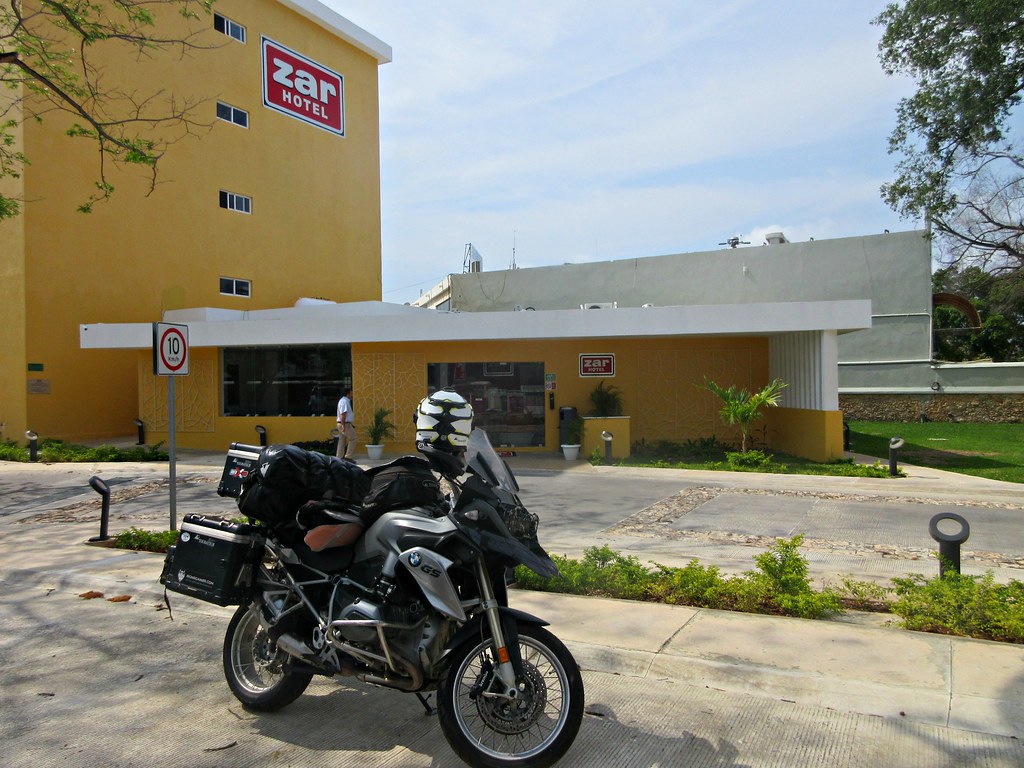 I spent a lot of time researching hotels to stay in Merida. Normally I try to stay within walking distance of the historical centers of towns. However, all the hotels in Merida by the historical center were too expensive. Compared to the parts of Mexico I have been to, Merida is rich. The prices of accommodation reflected that.

The Hotel Zar was on the outskirts. Its benefits for me though were that it was next door to the UPS store who would be delivering my new credit card, and there was a Starbucks nearby 🙂

The hotel had mixed ratings but I found it really good. It was clean, new and modern, good WiFi, hot showers even if you had to let the water run a bit before getting to the hot water, and the staff were friendly and accommodating. They even said they would keep my motorcycle and motorcycle clothes for free while I went to Cuba! 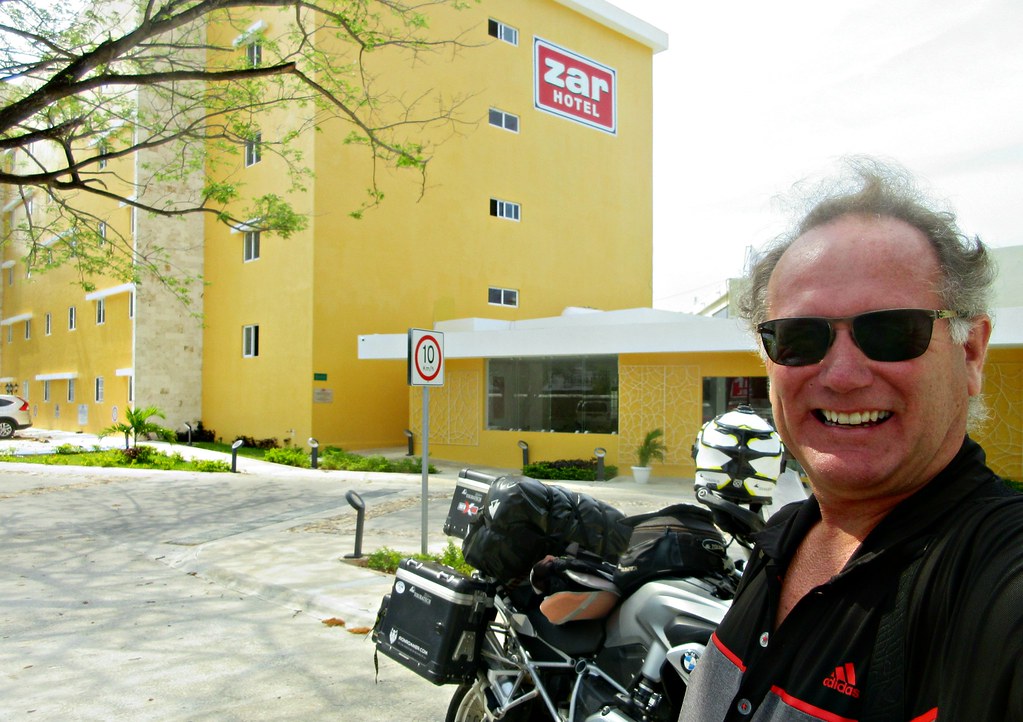 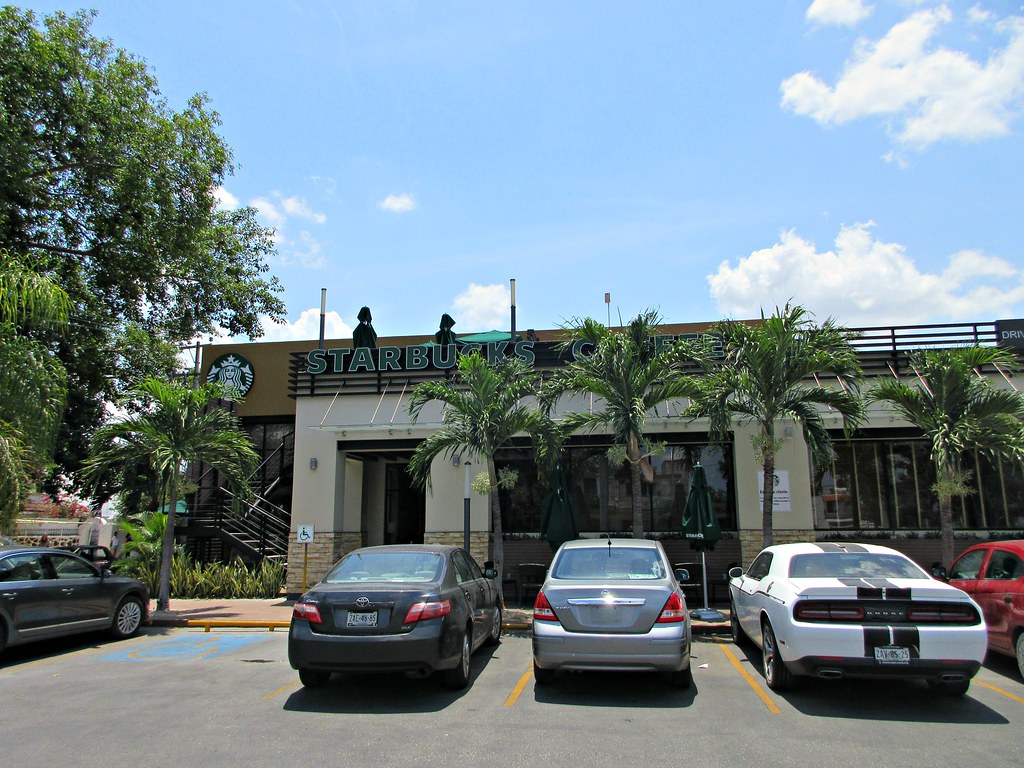 Yes, I went to Starbucks most every morning while in Merida. People love to bug me about that. Some people hate Starbucks as it is a US international company and the boutique coffee shops are in these days. People feel a sense of pride and I would even say smugness about going to a boutique coffee shop.  The same goes for craft beer. But that is a different post ha ha. Now, I like these too!! I can be smug at times ha ha. I am in such a place as I am writing this now. But when I have lived in a foreign country or when traveling long term like I am now, Starbucks gives me a piece of home. It is a familiar place in what sometimes is chaos either physically or mentally.

I met a Barista at the Merida Starbucks who spoke near perfect English. I asked her how she learned. She said no classes, just through watching reality TV ha ha. After that she remembered my name and greeted me by name each time I showed up. This made it feel even more like home.

As I mentioned, Merida is a rich city compared to the other parts of Mexico I visited. Here there are functioning street lights, well maintained roads and nice houses.

Montejo Boulevard led to the historical center from the Hotel Zar. The Boulevard was originally created as a street for the wealthy to live. Many of these home still exist. However, now they have been converted into museums, banks and company headquarters. 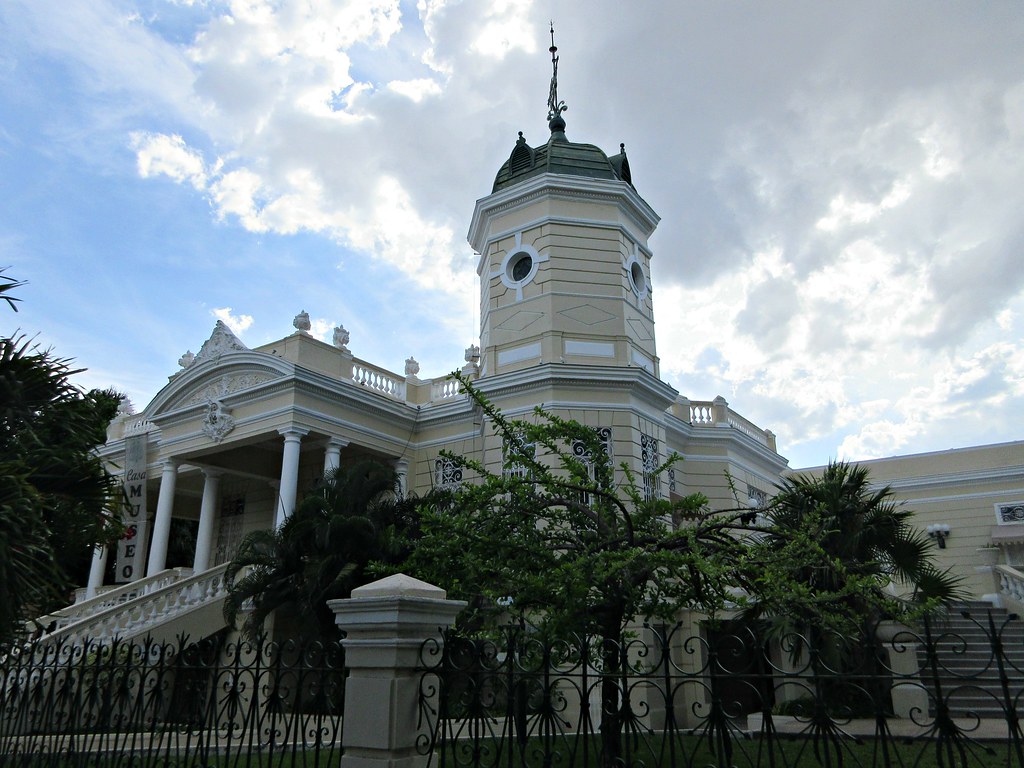 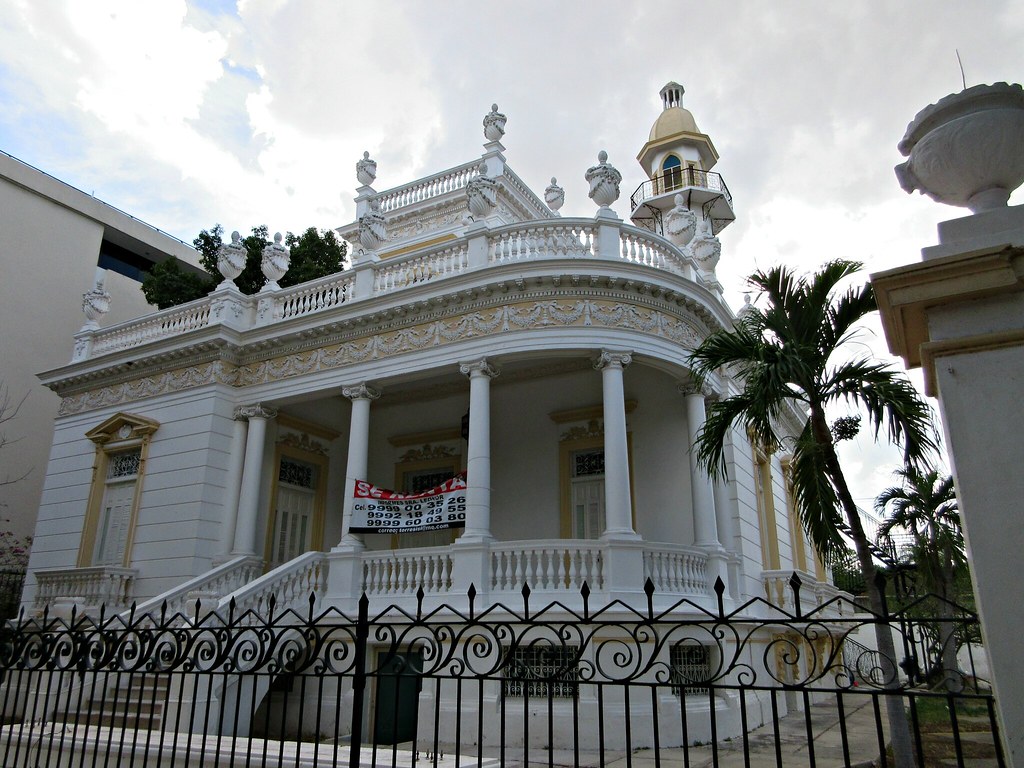 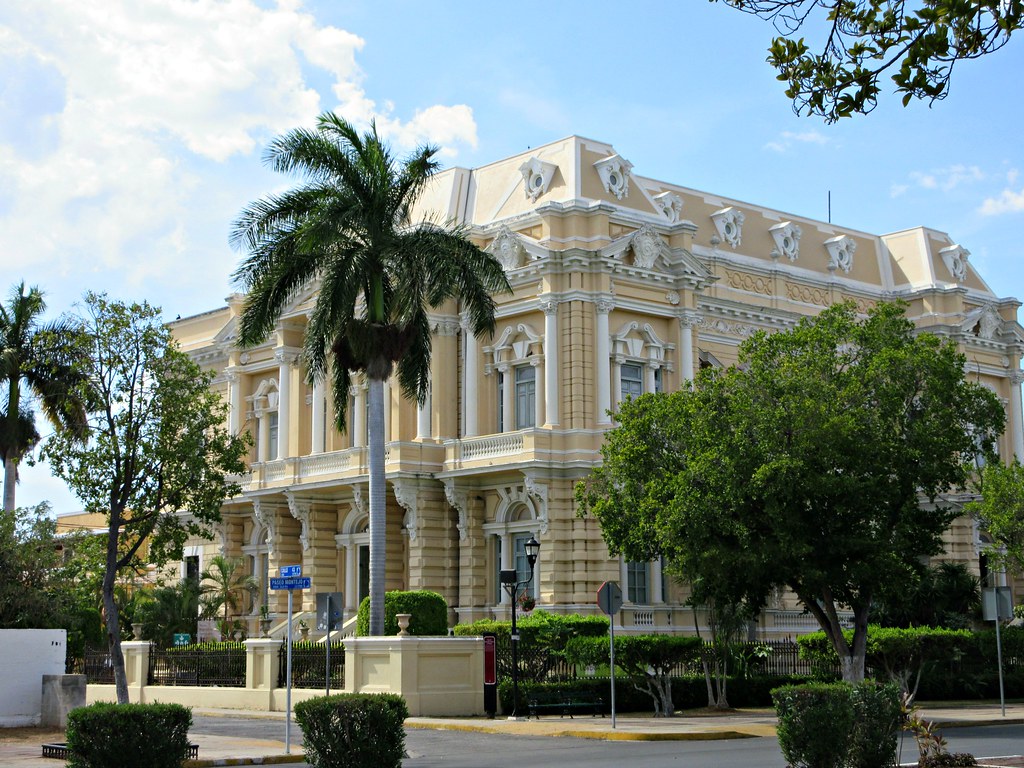 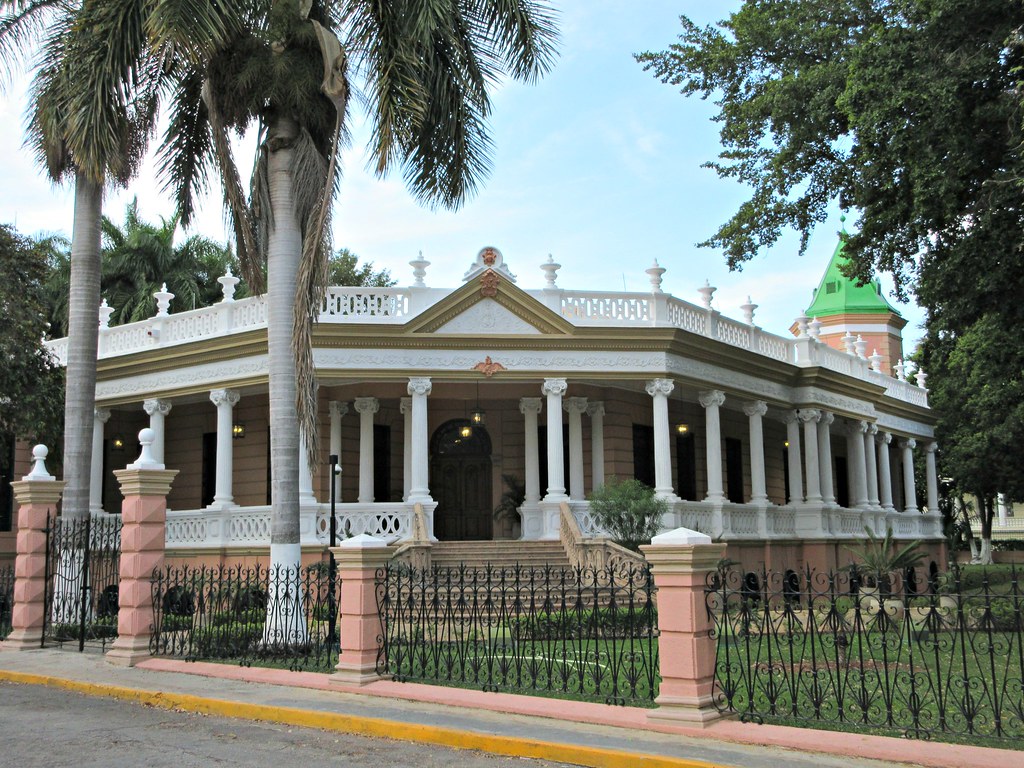 Of course, I notice the police where ever I go. The Federal Police always drive nice vehicles, and well kitted, the State Police less so, and the Municipal and Transit Police are in old vehicles and wearing tattered uniforms. In Merida things were noticeably different. The police here drove fancy cars with low profile lights and nice paint jobs. There were also lots of motorcycle cops riding Harleys and what appeared the be BMW 650 dual sports. All of them nicely kitted out. 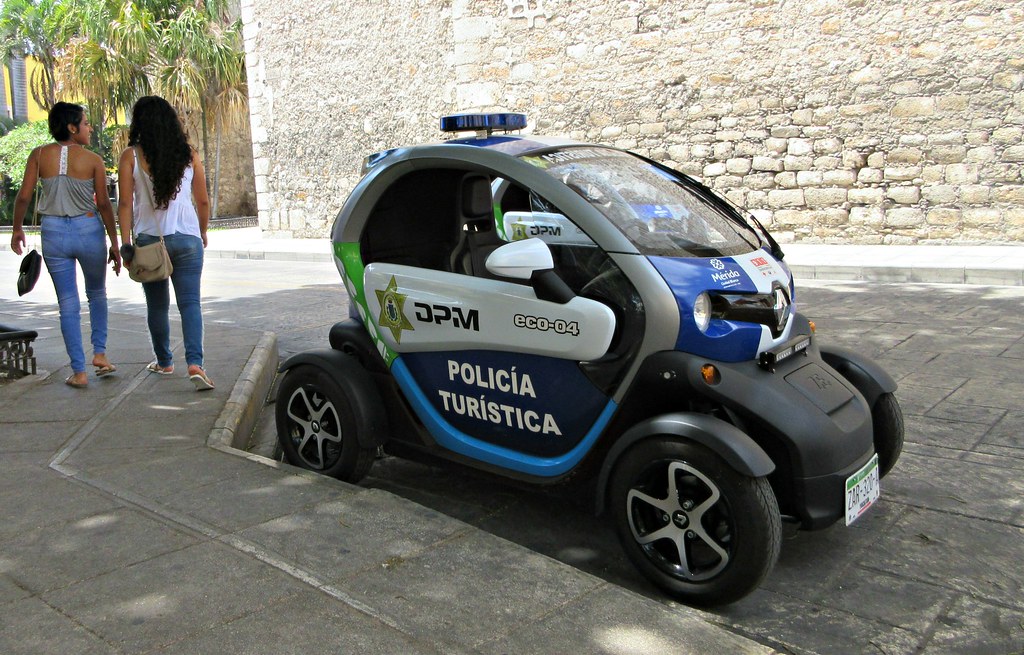 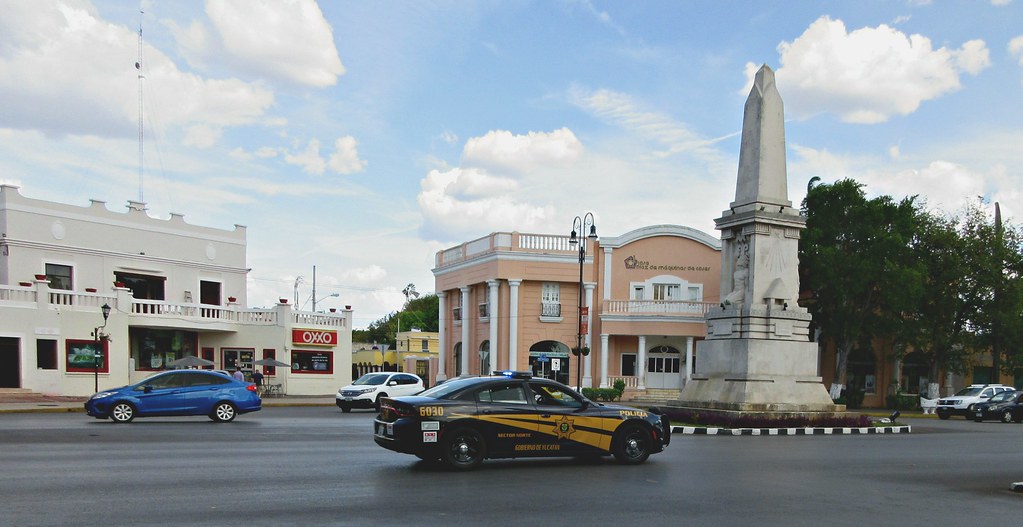 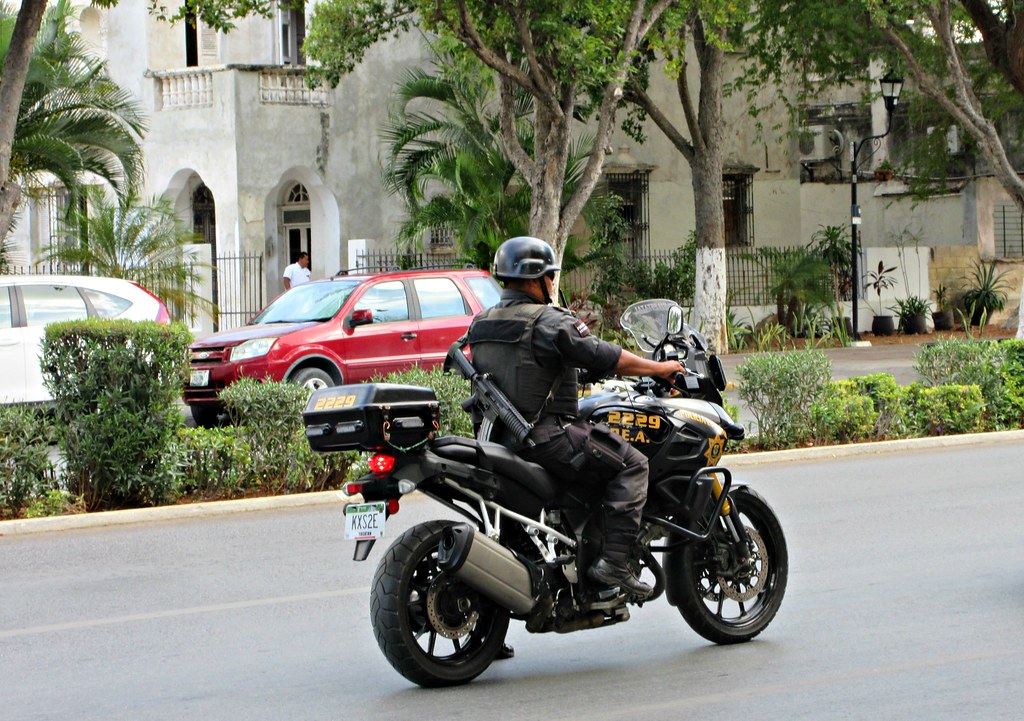 It is a long walk to the Merida historic center from my hotel.  Every town in Mexico seems to have a Zacalo with a large church at one end. They are the meeting place for people. There is always something going on there. Merida was no different. 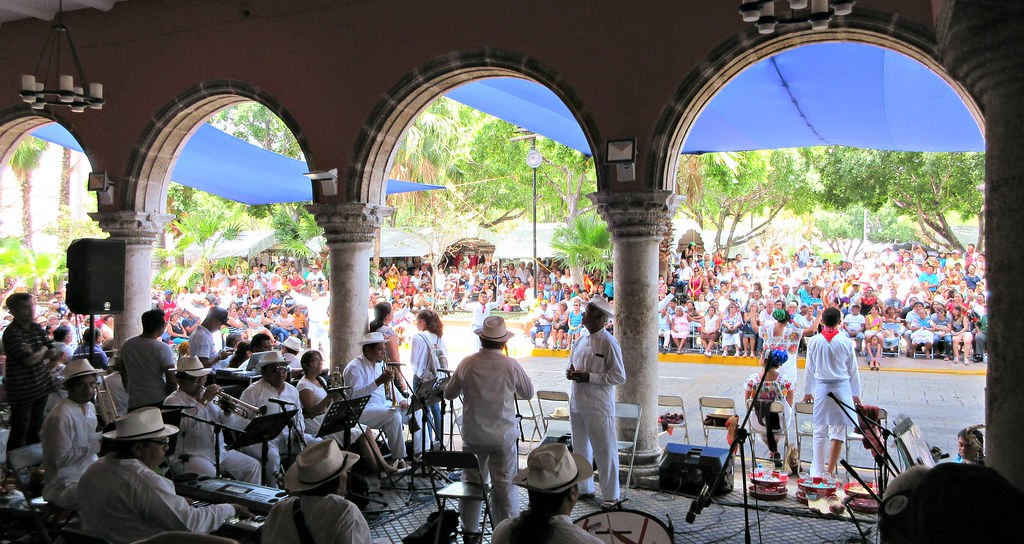 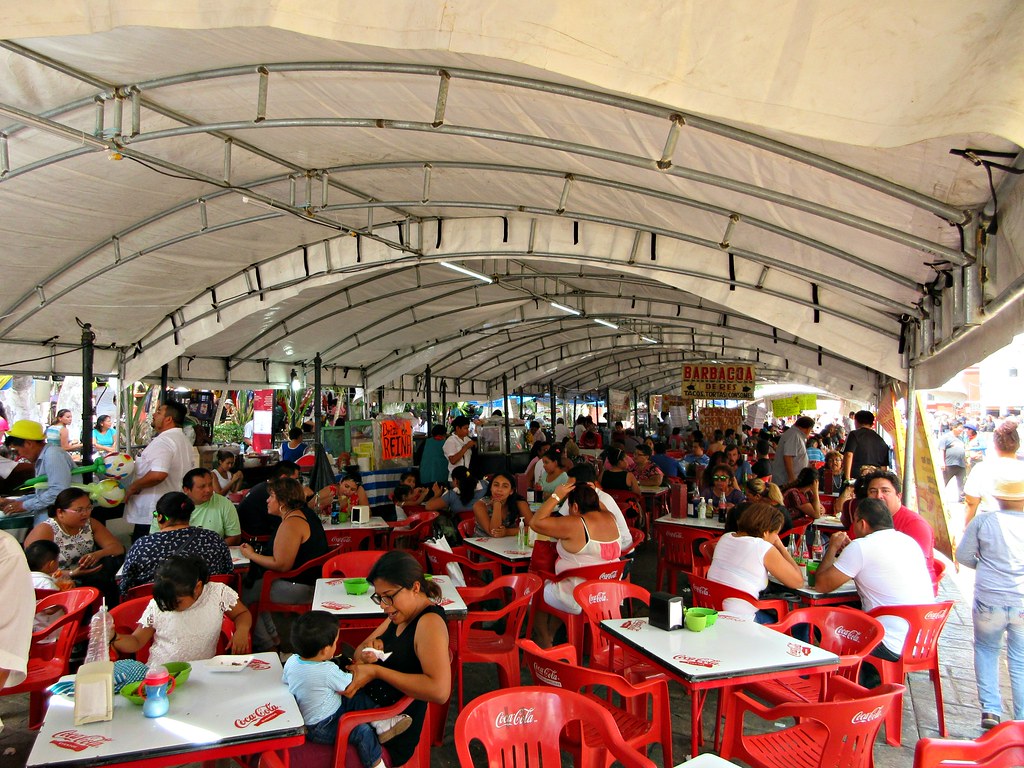 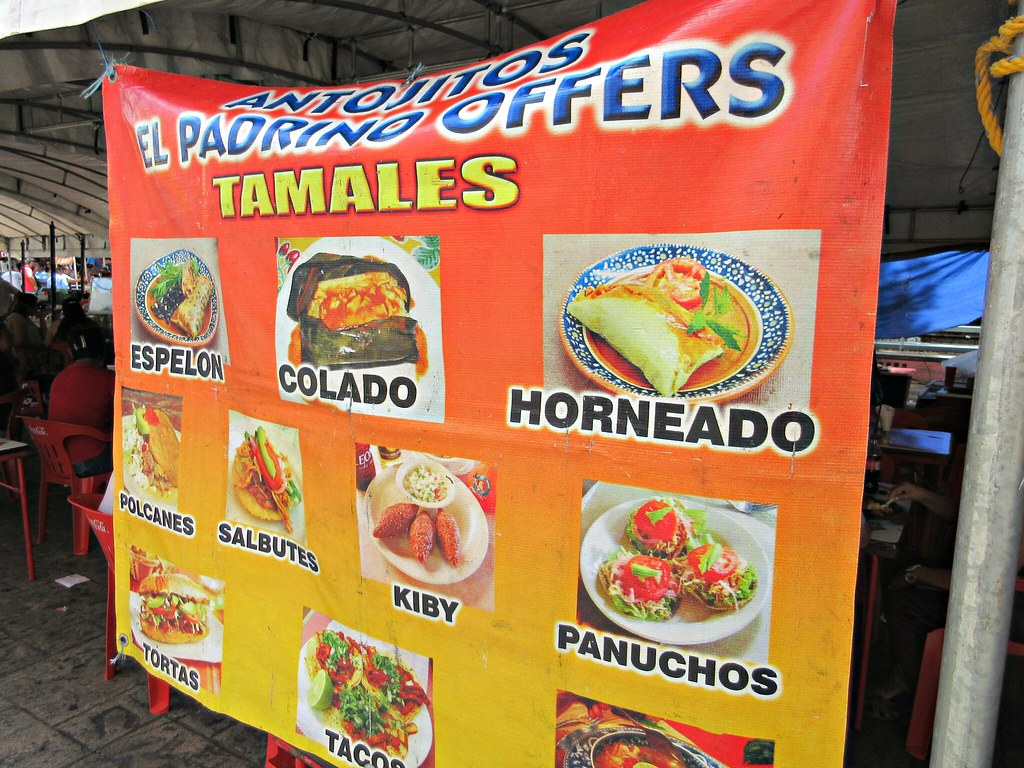 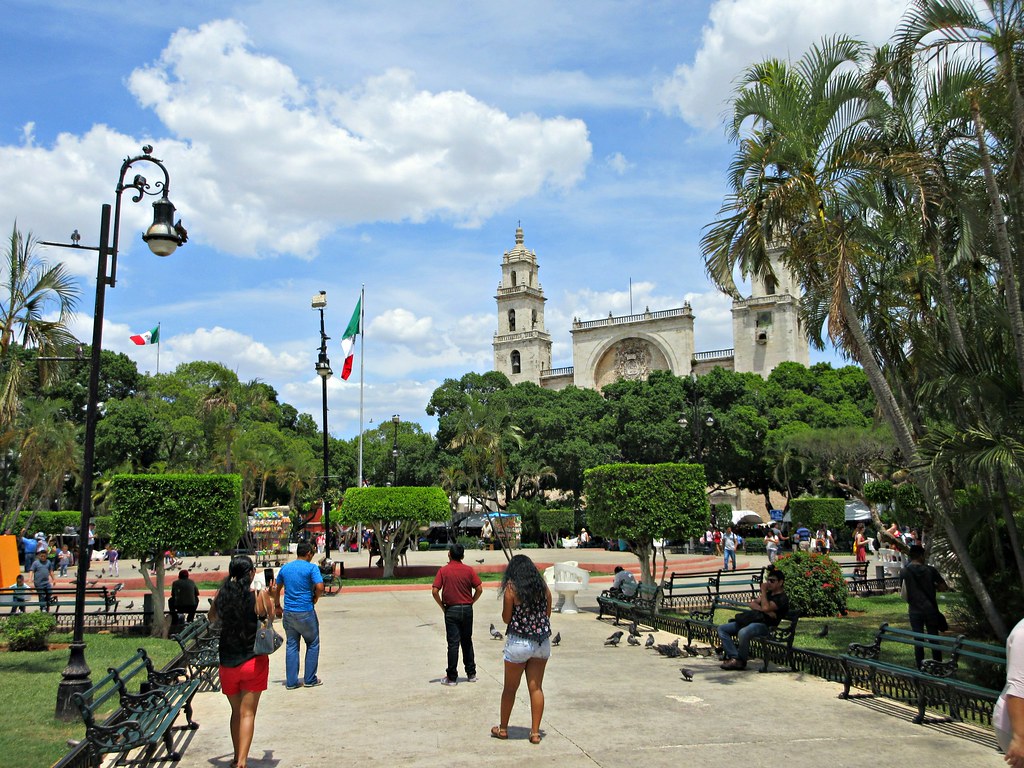 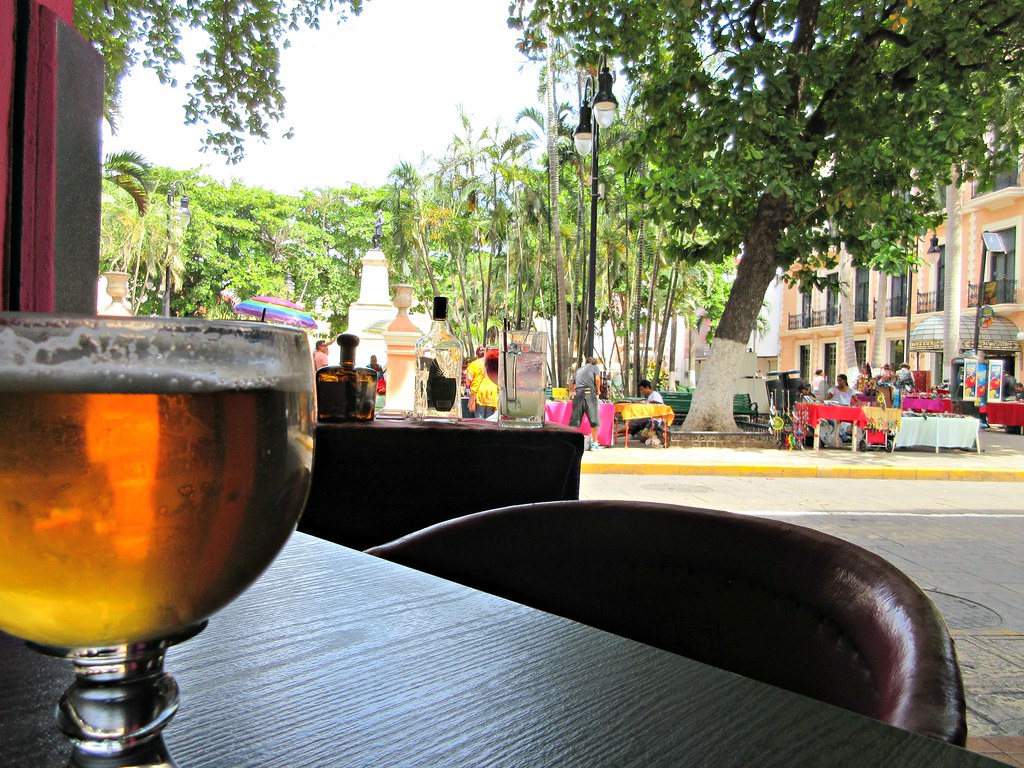 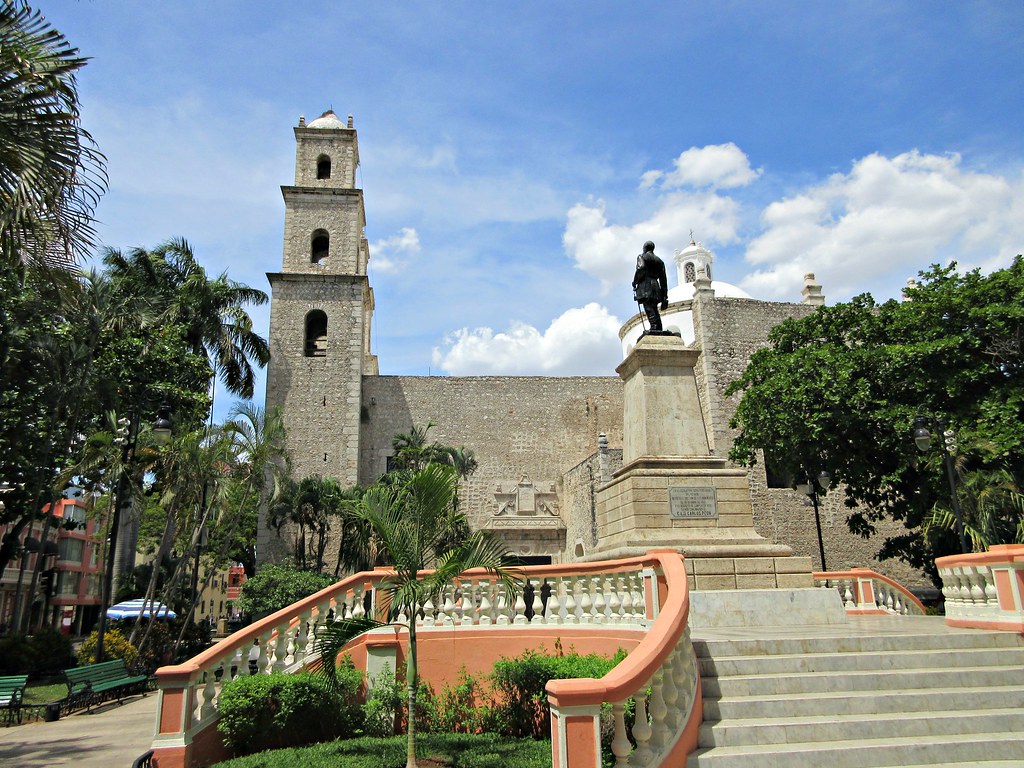 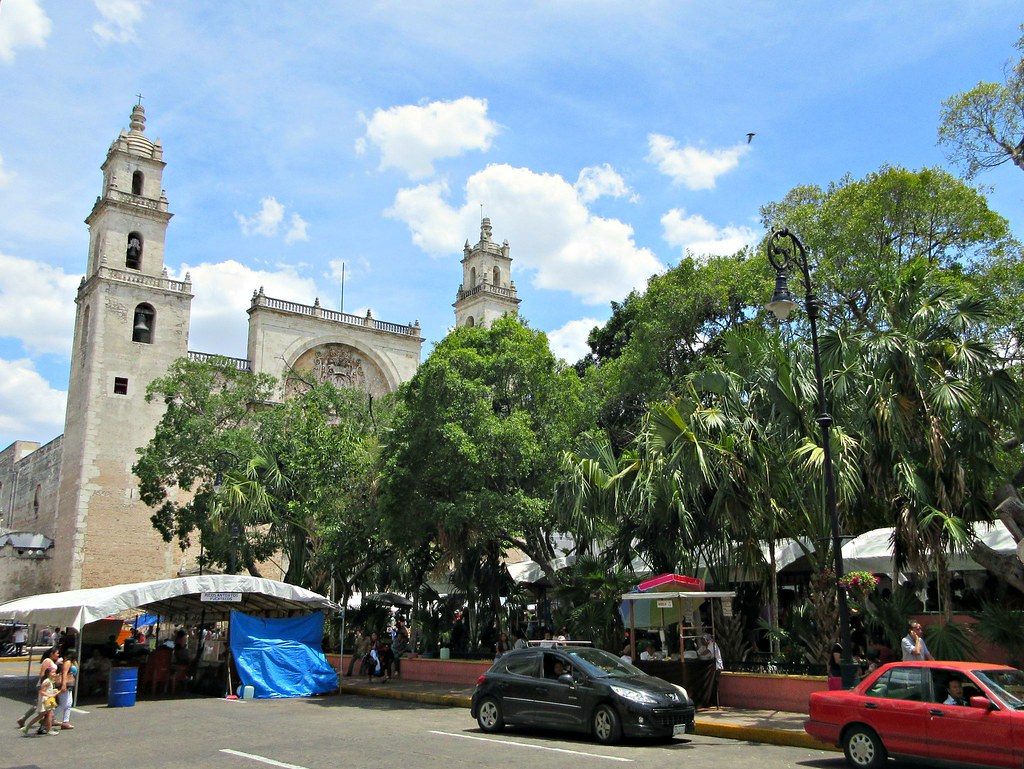 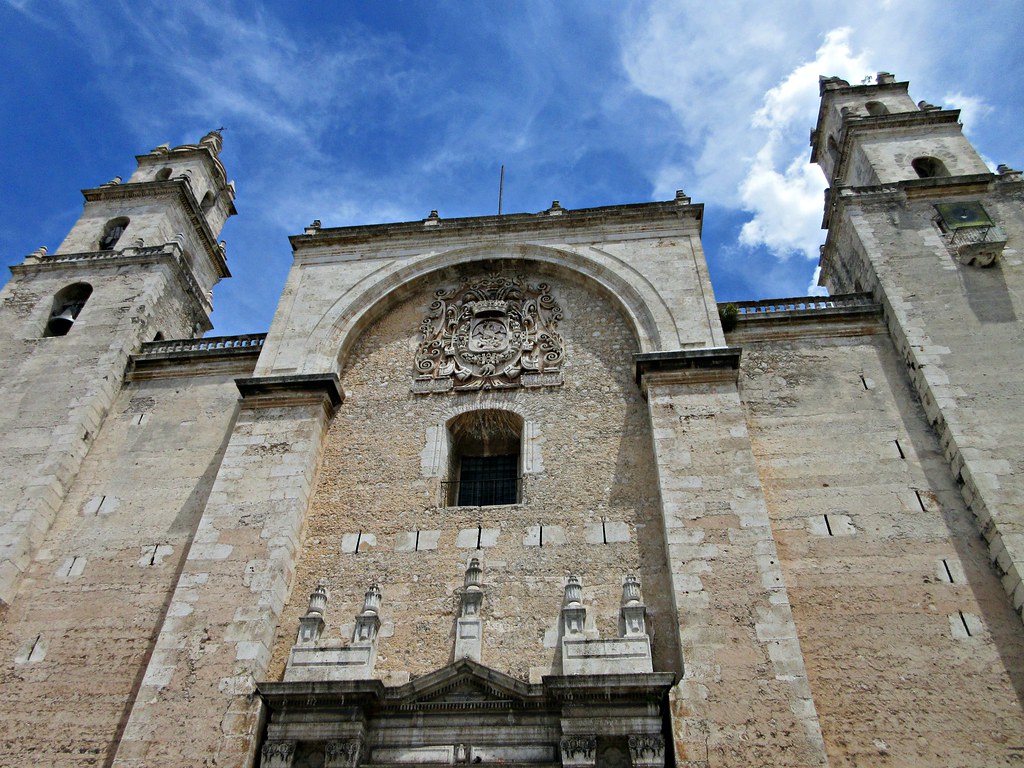 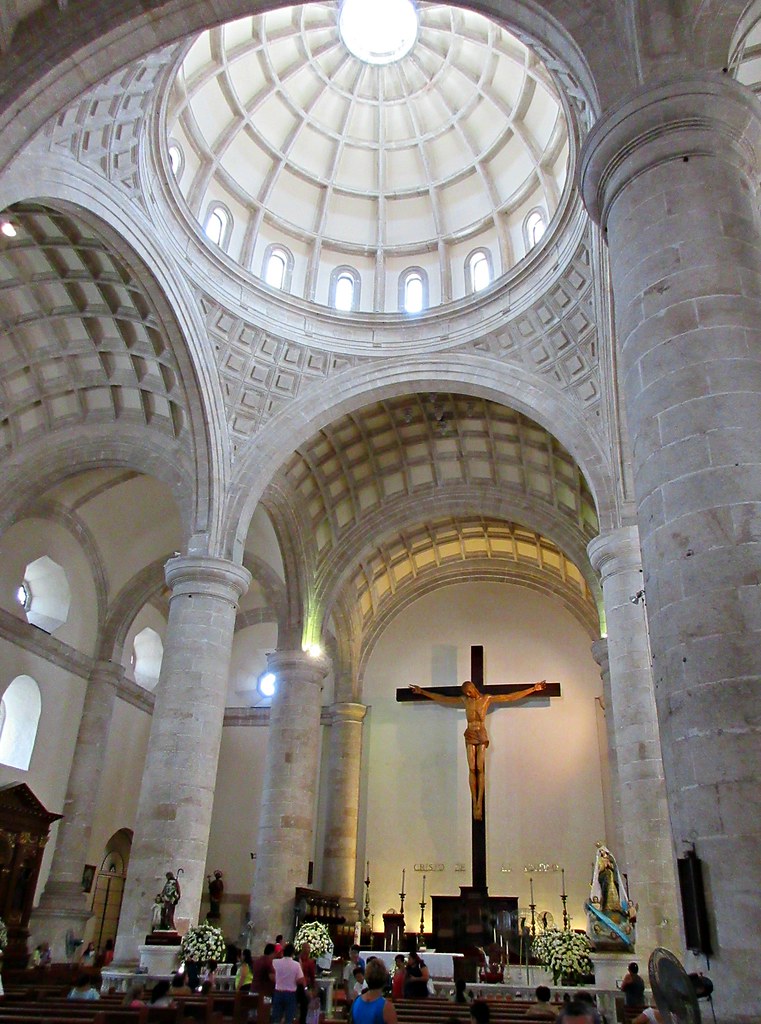 One night I looked for a cheap local place to have some Mexican food and enjoy some Mexican atmosphere. I have to admit that up until this point I had been mostly getting cheap food at the local OXXO, a local grocery store and from the Burger King across the street.

OXXOs are everywhere in Mexico. They are like the 7-11s in Canada. They have cheap food well within my budget. I have gotten food from them lots while I traveled Mexico.

There was also a McCafferty Irish Pub next to my hotel so I had a meal there to eat some veggies.

Too look for someplace different I checked out tripadvisor. A highly rated restaurant was La Negrita and it was suppose to be cheap. It was a long walk away but I wanted to experience something more Mexican while in Merida. It didn’t disappoint. 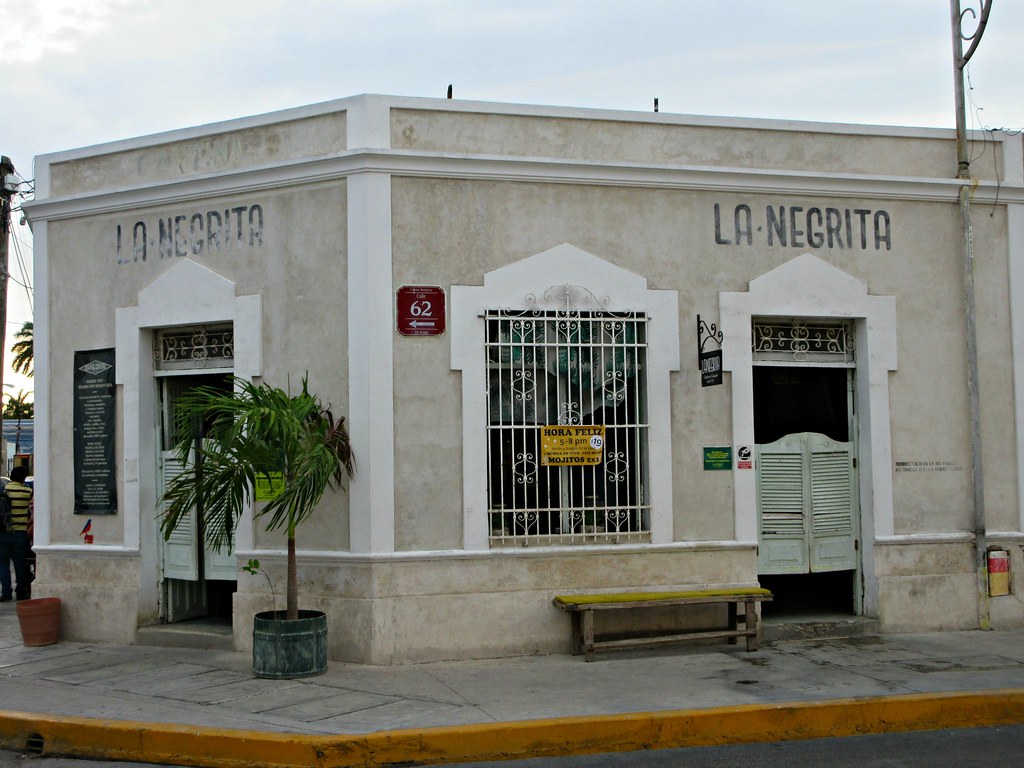 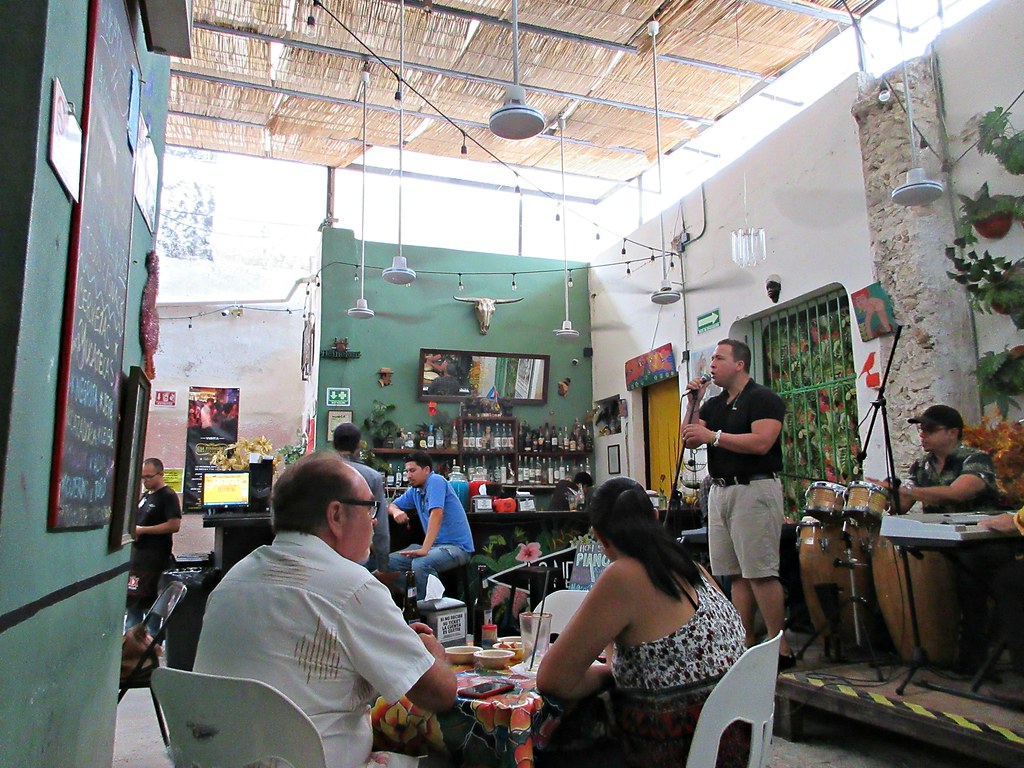 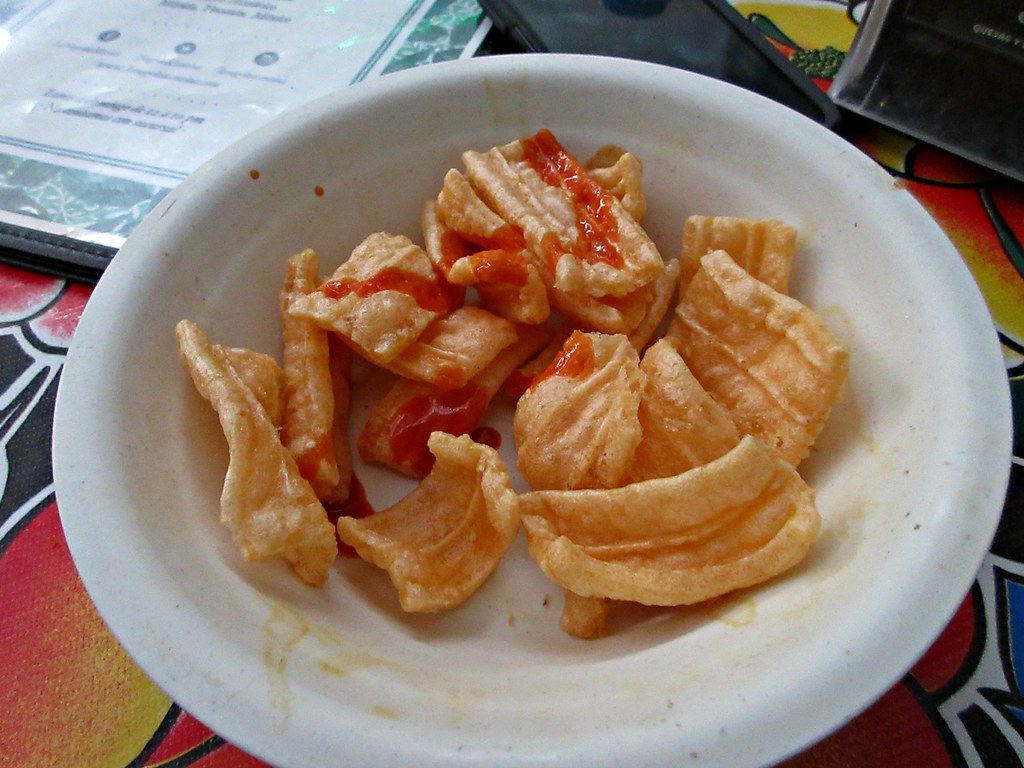 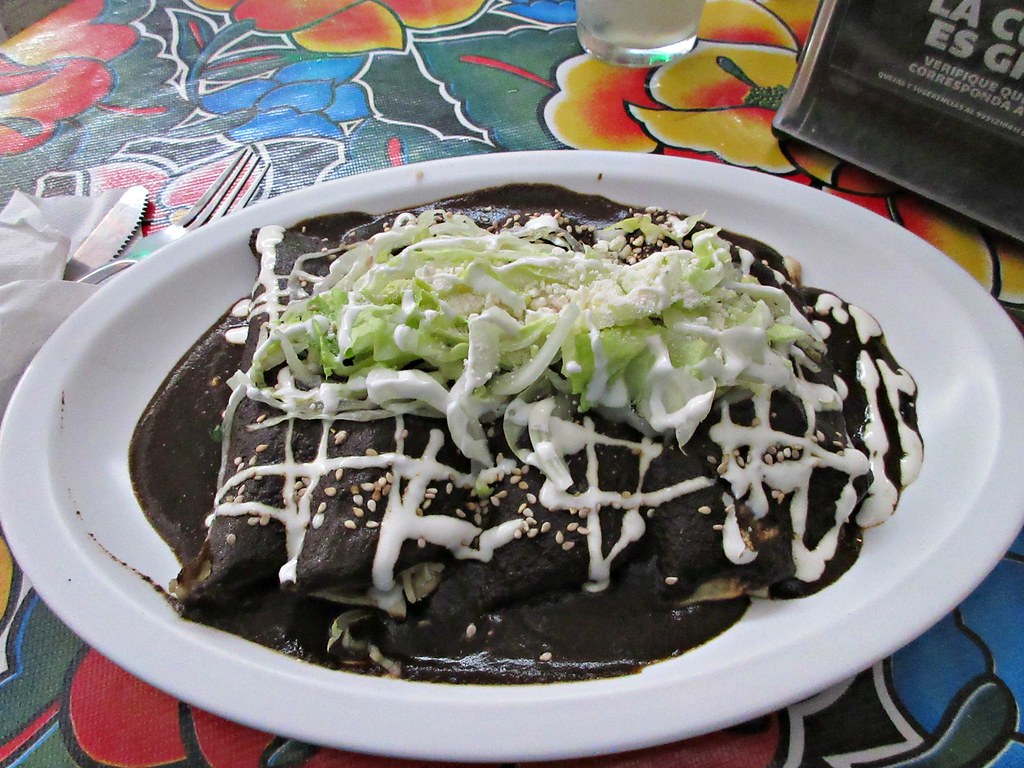 When I left for dinner to La Negrita it started to rain. This was the first rain in a very long time since I have been in Mexico. In fact, I really haven’t even been checking the weather forecast I just assume it will be sunny out.

When I got back to the hotel I checked the forecast for Merida and Havana. Rain for the next 7 days. I guess the rainy season had finally arrived. I will have to start watching the weather for my rides. 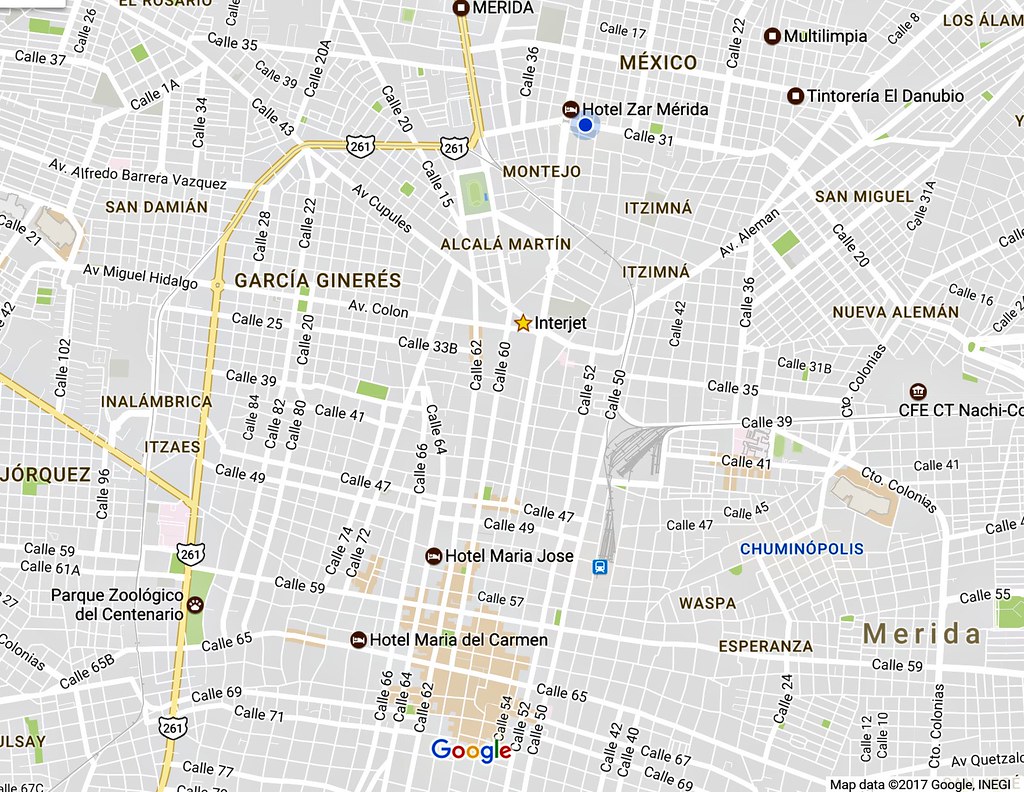