The goal today was to leave Dawson City to go back to Whitehorse with a stop for a cinnamon bun.

It looked like it was going to be a nice ride. Mostly cloudy, but a little sun poking out from time to time. As I rode I passed lots of “mom and pop” gold mining claims. Each one sifting through river rock for gold.

As I got closer to Whitehorse I came up to Braeburn Lodge. Now I had heard from several people that I needed to stop there for a cinnamon bun.

On the counter of the restaurant and there were these massive cinnamon buns!!! I love cinnamon buns. I even like to eat the raw ones before they are cooked. They should sell cinnamon bun dough too! Maybe on a stick. The best cinnamon buns were made by Grandma Klassen.

I dug into eat but didn’t get too far before I was full. I had it wrapped. This cinnamon bun lasted for 2 more meals after this one! So perhaps the price wasn’t too bad after all. It was good, but no Grandma Klassen 🙂

As I got closer to Whitehorse the weather turned cloud to drizzle to rain. My options were to camp or go to the Talhini Hostel I enjoyed the last time I was here. The only problem with going to the hostel was that it was 20 km back from where I came. I also had to go through a construction zone with a pilot car. Naturally I went to Starbucks to contemplate my next move.

The rain eventually stopped but the clouds still looked ominous. After checking the weather forecasts at various sites, I made the executive decision to camp at Caribou RV. You may remember I camped there when I was heading north.

On my last stop I had run into a guy from Montreal who had had enough of the rain, mud and dirt. He was headed home as fast as he could. As I pulled in this time I was reminded of him. I understood how he felt. I was feeling pretty exhausted from the same things. The one difference? I made it to Prudhoe Bay and dipped my toe in the Arctic Ocean. I did it! I may be exhausted, but I achieved what I set out to do and persevered through the various hardships.

After pitching my tent, I went to dinner at the adjacent Wolf’s Den restaurant. Just for a salad. The cinnamon bun was still sitting in my stomach. 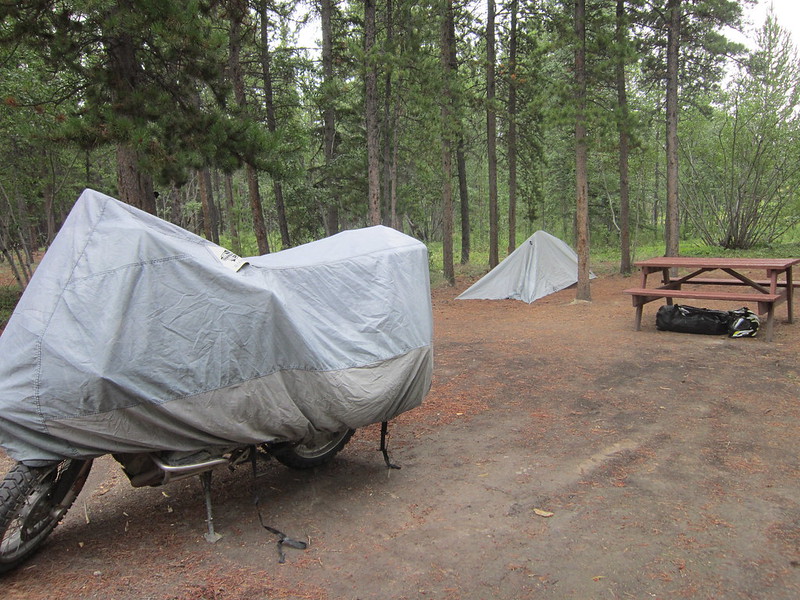 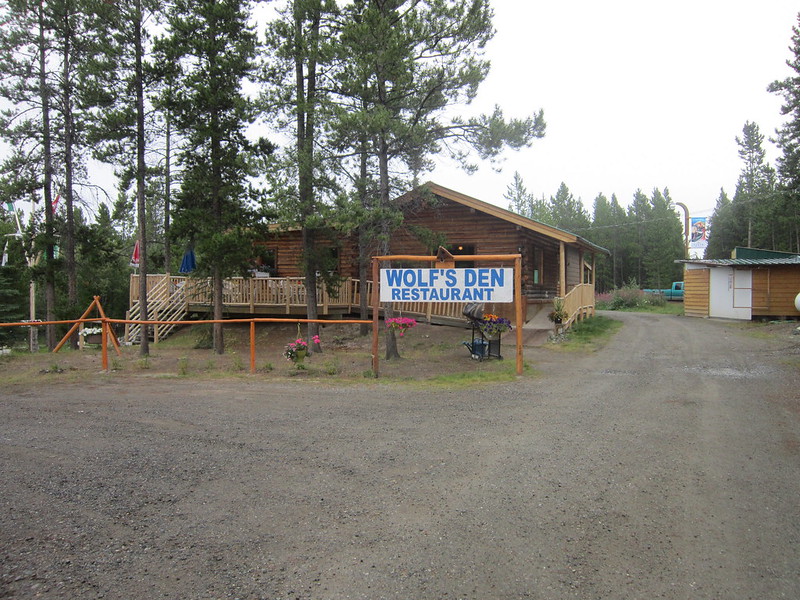 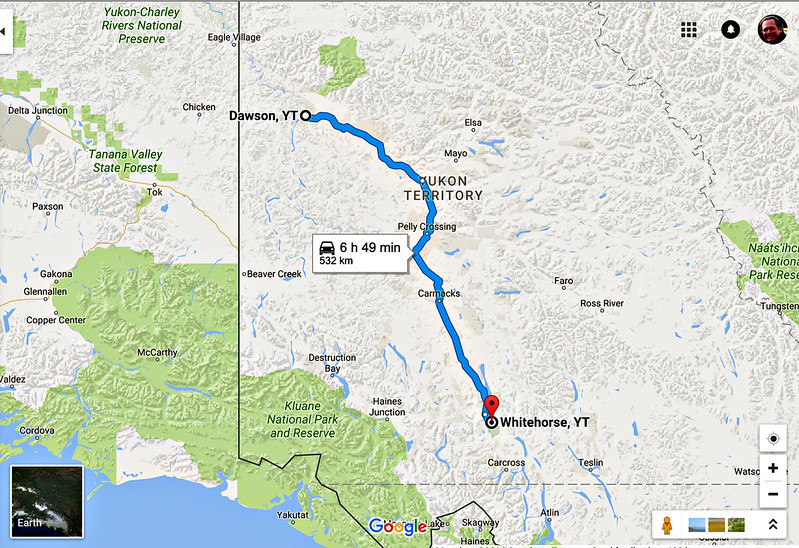 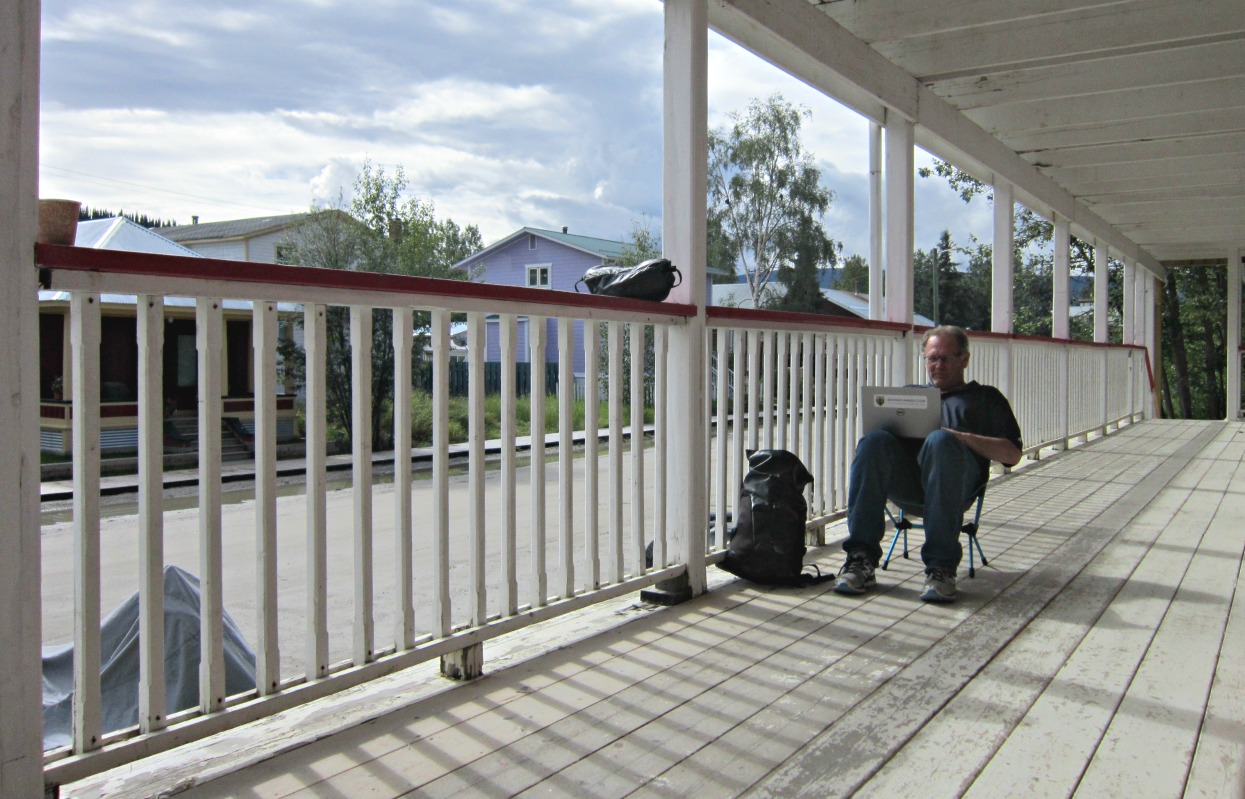 The day started out pretty awesome in Dawson City. It was sunny, was chatting with the housekeeper as I sat out on The Bunkhouse veranda doing my daily journals, and had plans to tour Dawson City and in the evening see Diamond Tooth Gerties. Then it happened.

I finished the Top of the World daily journal and noticed that not all of it was posting to my website. I actually still have that problem. It appeared that there wasn’t enough upload room to get it to my website. The internet did not give me advice I was comfortable with to rectify the problem. So I contacted my former website instructor. He gave me the coding for a php.ini file to rectify the problem. As I was tinkering with that, somehow, still don’t know how, I deleted the wp-content file. This crashed my website.

As I recognized what happened a sinking feeling descended on me. With the help of my instructor I worked with Go Daddy to get it back. Go Daddy has excellent service. Of course this was going to cost me. At the same time I got them to do automatic backups. On the road it just isn’t possible to find reliable internet to do a complete backup, including the wp-content folder.

In any case, getting the backup wp-content was going to take a while.

I had been told that a must see was Diamond Tooth Gerties and the Snake Pit bar at the Westminster Hotel.

What I really like though was touring the city and reading the plaques on buildings describing the history of them. A really cool display is put on by Parks Canada detailing the history of Dawson City. Love the old photos and then seeing the actual building right in front of you! 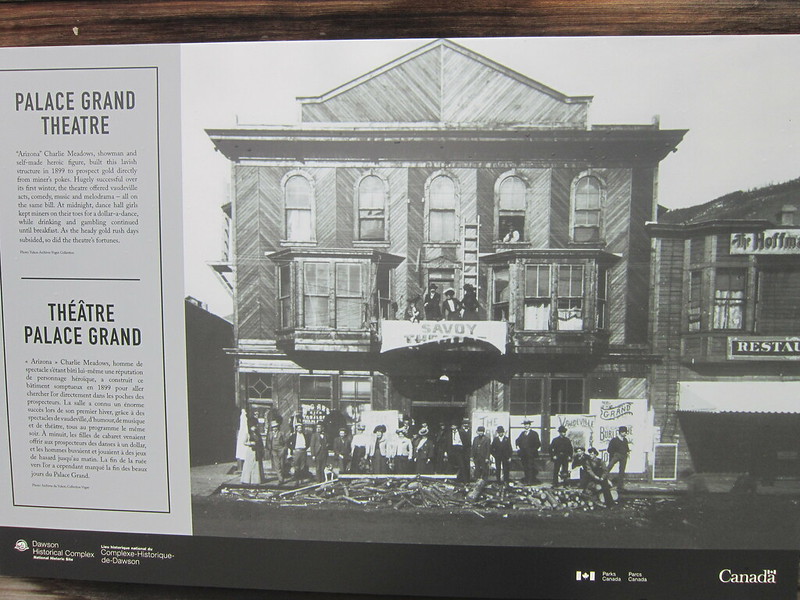 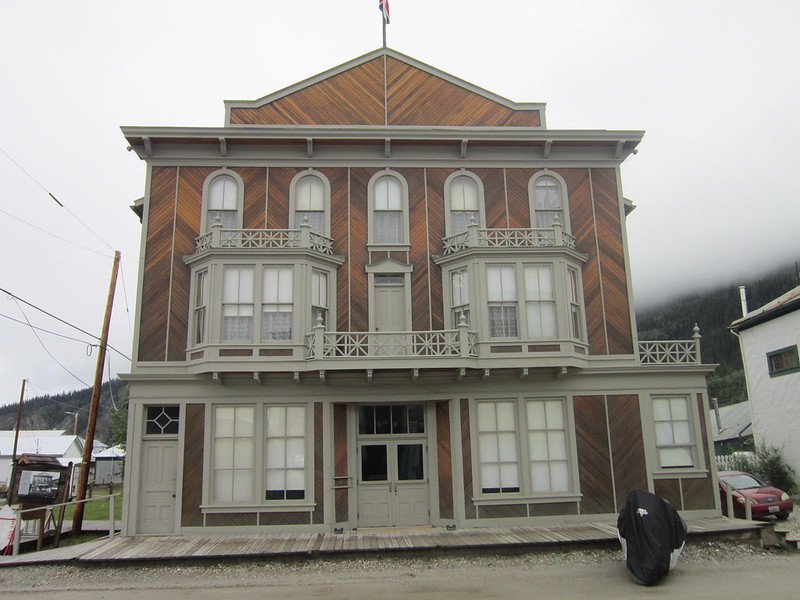 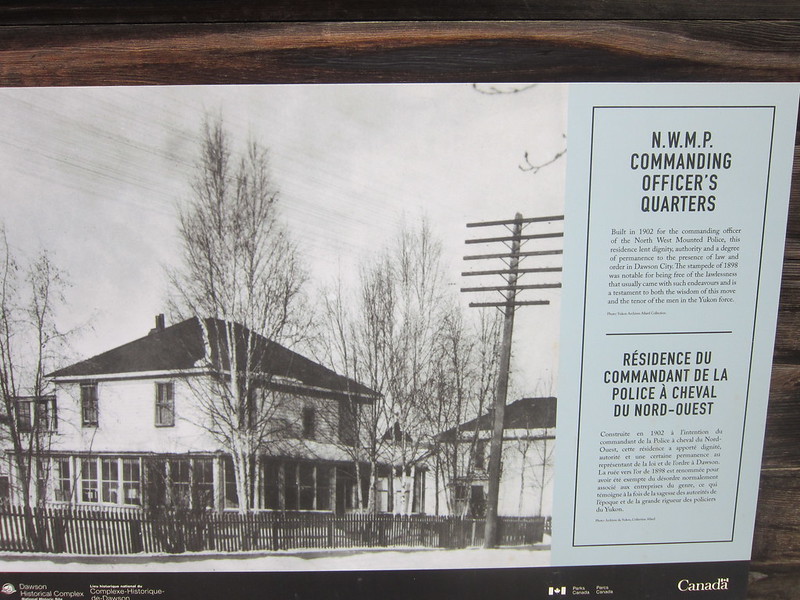 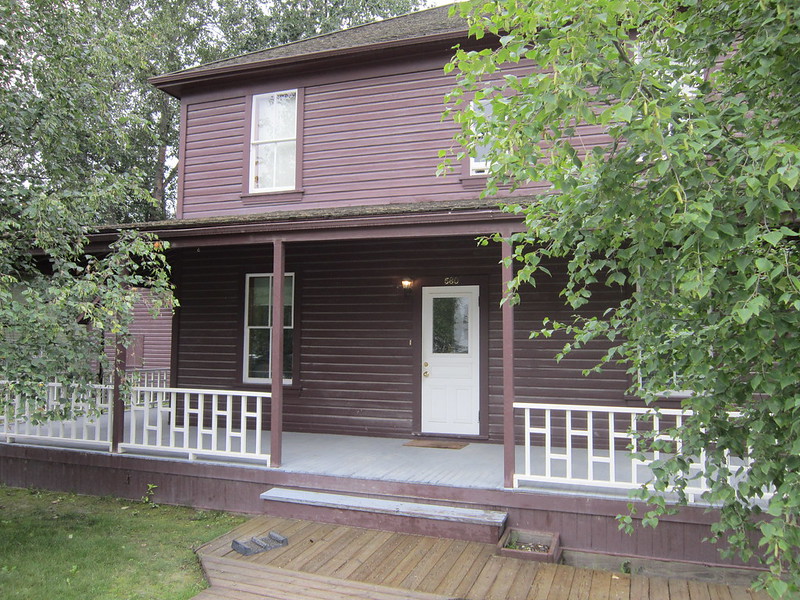 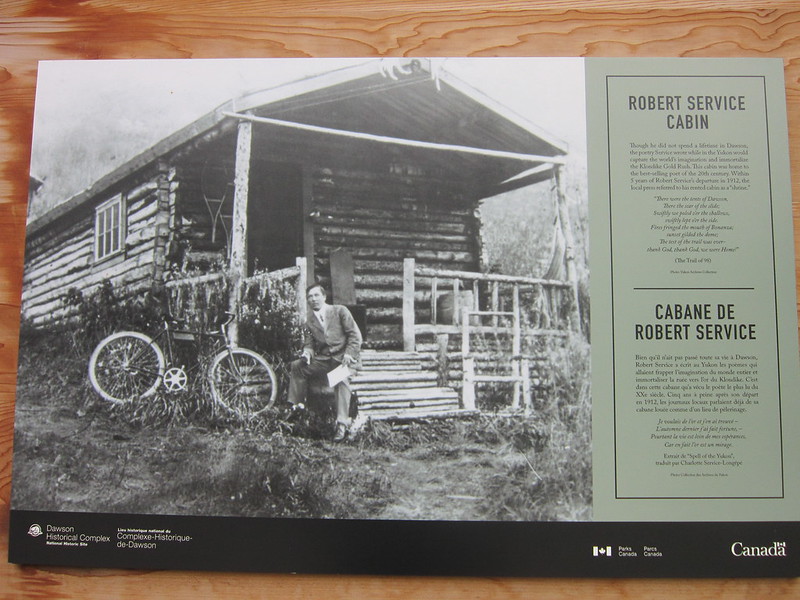 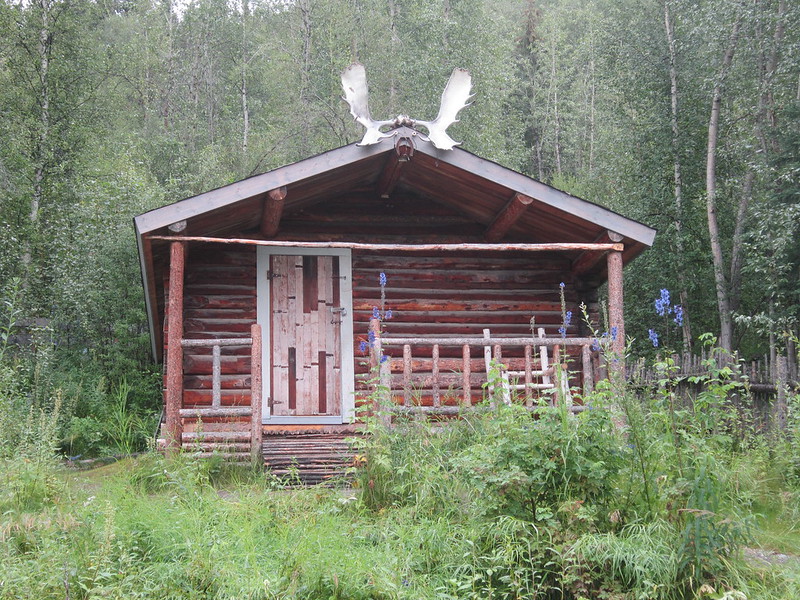 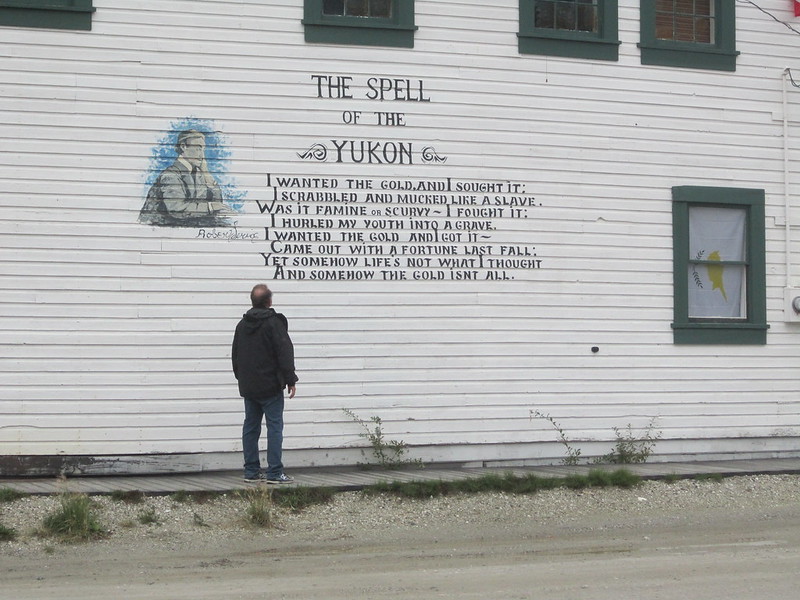 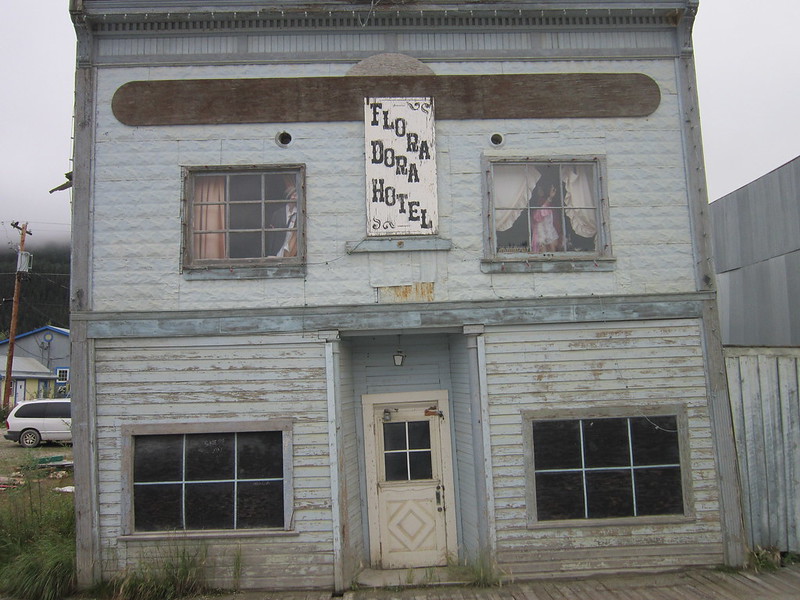 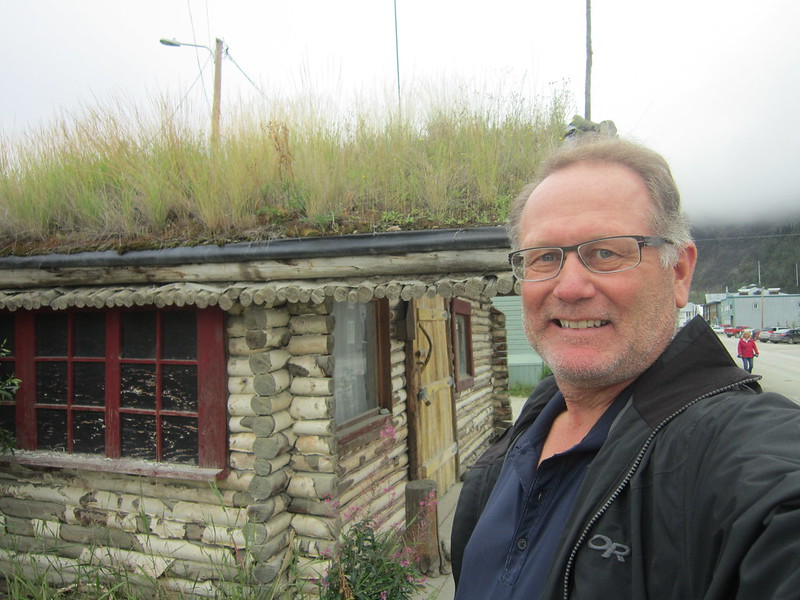 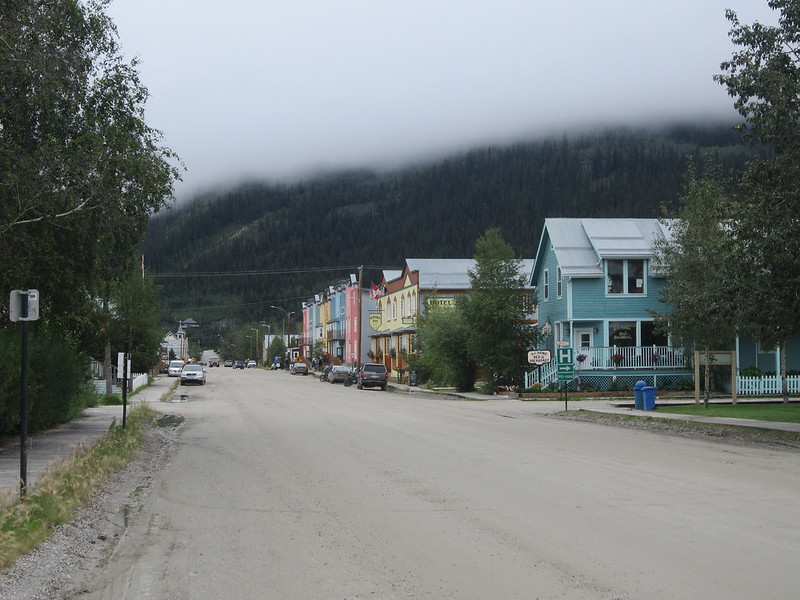 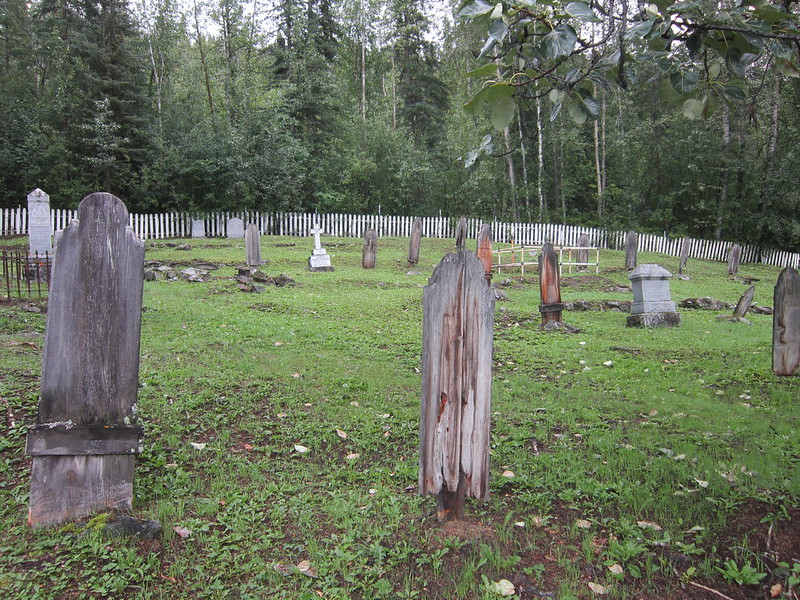 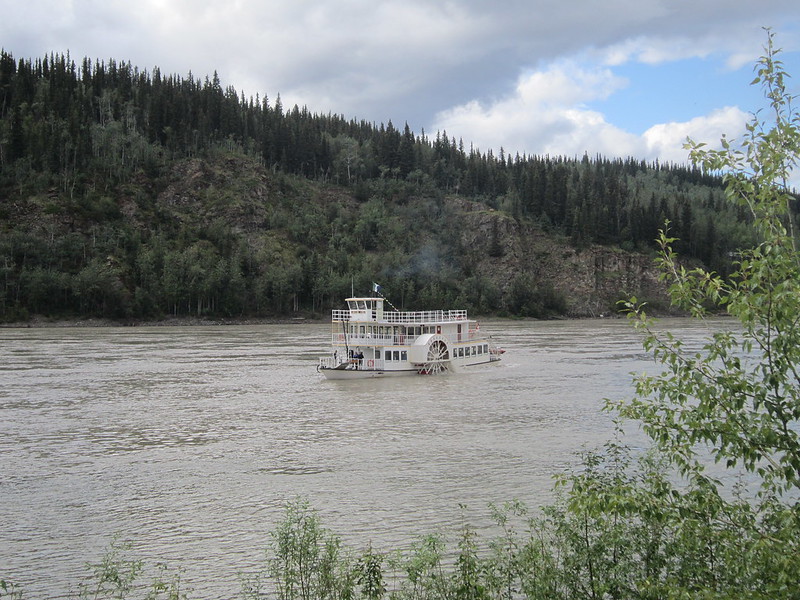 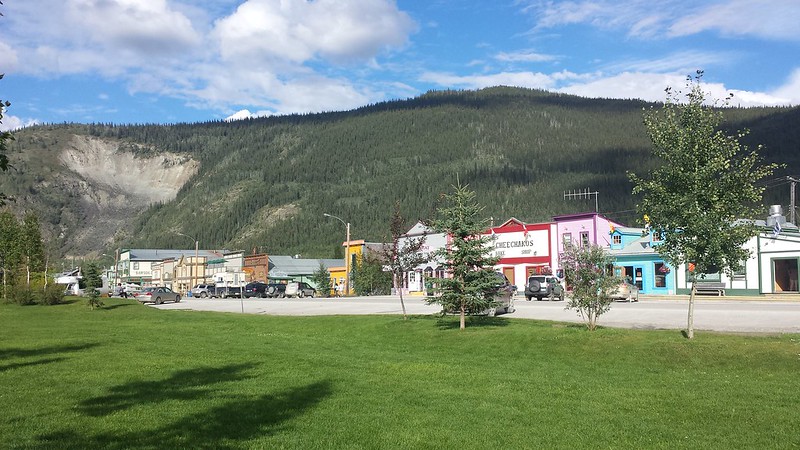 The Snake Pit bar is an ecclectic place built in 1898 that I was told is where the locals hang out. The decor consists of old kitchen tables, local memorabilia, jokes tacked to the wall, a big canoe, paintings of local legends, and stuffed wild animals. The Snake Pit basically serves beer. although you can order chips and hot dogs. 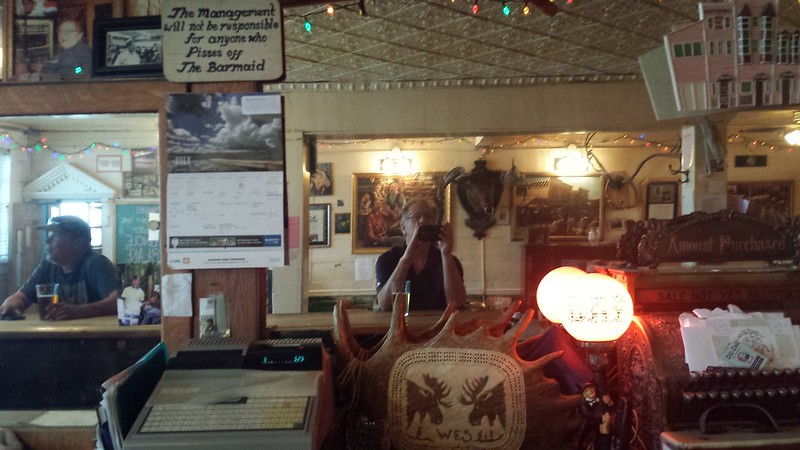 I was there at dinner time and wasn’t many people there. The bartender had lived in Mexico though. So I got some tips from her.

From there I went to Diamond Tooth Gerties.

Diamond Tooth Gerties is a casino with a stage show. They have three shows each night with each show becoming more “risque,” at least that is what they advertise. I planned on going to the later show but ended up at the first show. The first show amounted to a cutesy show for white haired people on bus tours. To be honest I was bored by it. But then again, I was still discouraged from crashing my website. Perhaps if I was with someone I would have enjoyed it more. The later show might have been more entertaining. Having said that, a lot of people seemed to enjoy it. So probably just me. 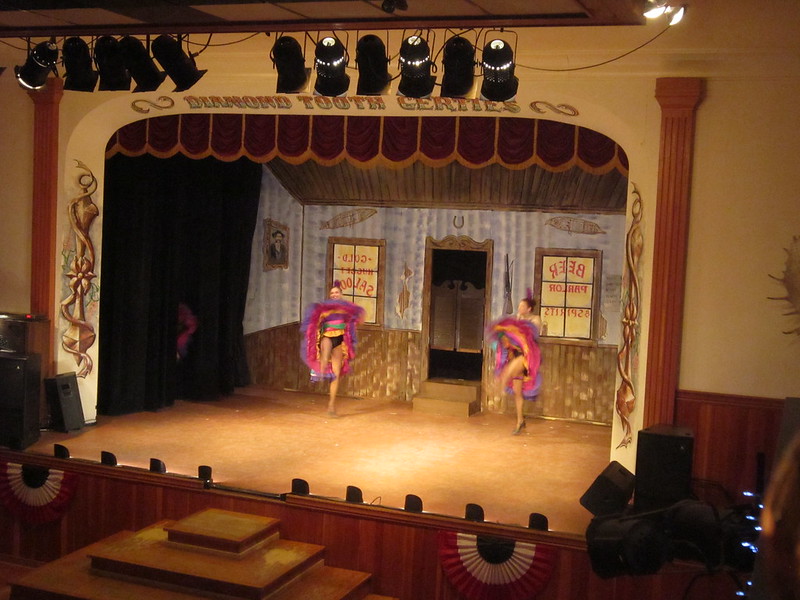 The casino was understandably quite small and something that doesn’t interest me much. 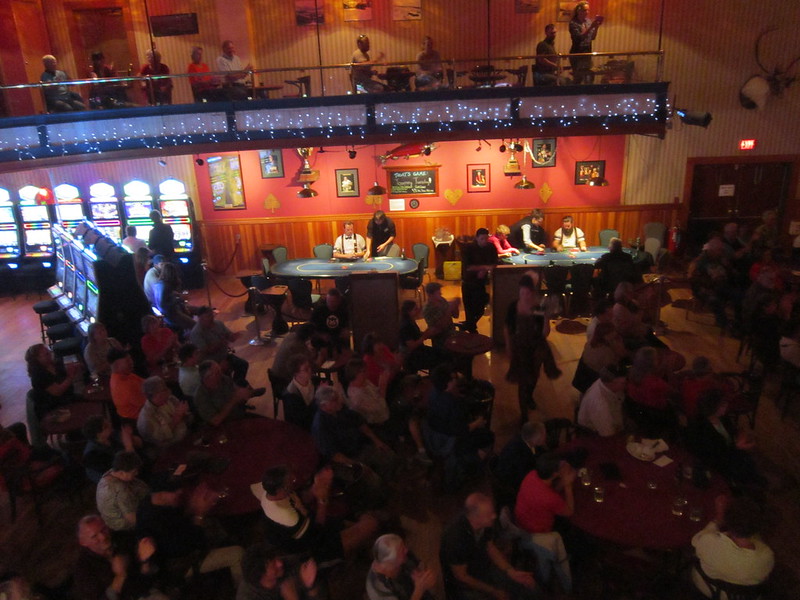 With that I walked back to The Bunkhouse hoping tomorrow my website would be back up. 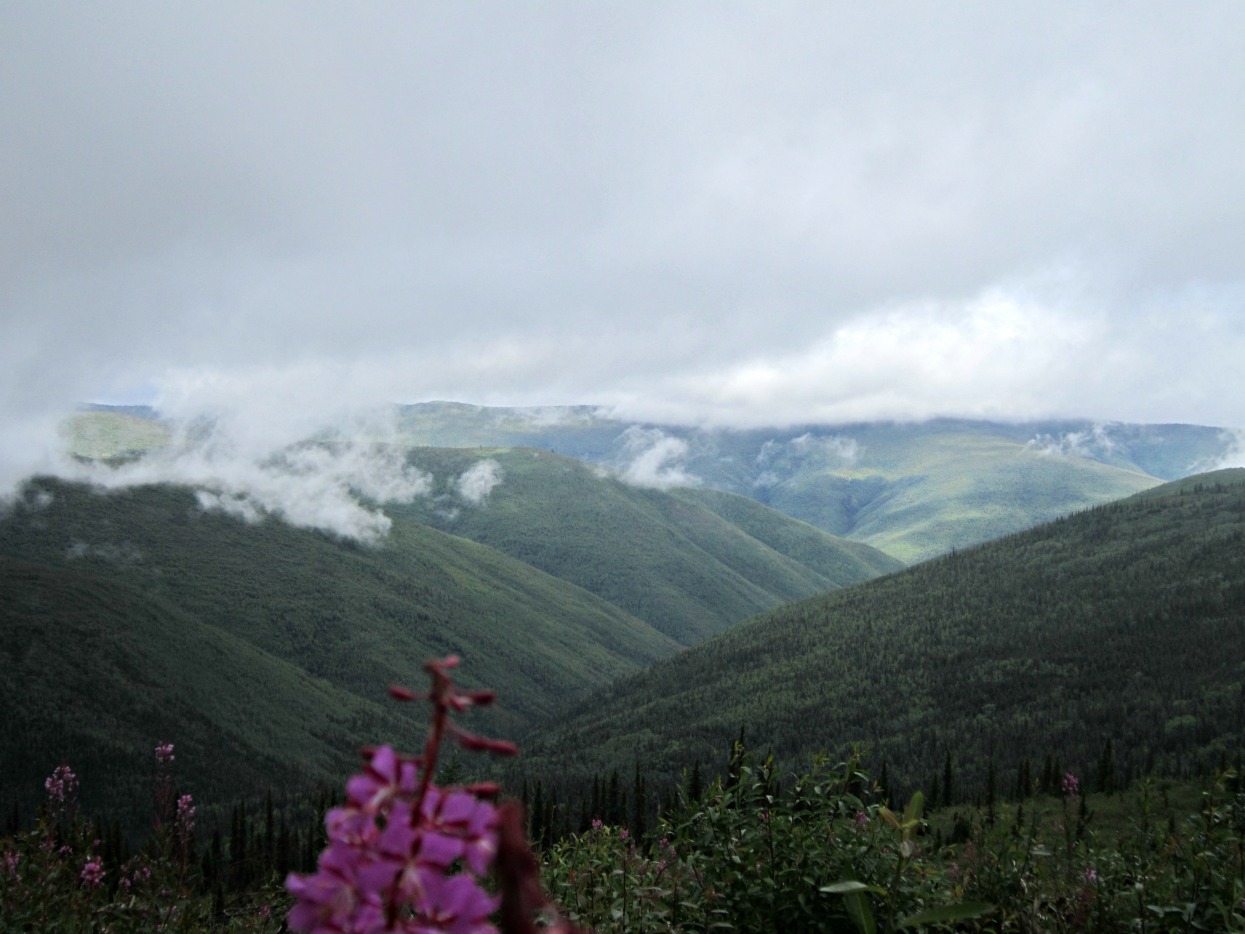 I was looking forward to riding the Top of the World Highway today to Dawson City, Yukon.

After a day of thinking yesterday in Tok, one of my resolutions was to take more photos and video. It is hard for me to do since I enjoy riding so much. It is just hard to stop. And to get really good photos I would need to set things up, taking even more time. Anyways, I envisioned stopping at various points along the Top of the World Highway and setting things up with me riding etc.

The first stop was the town of Chicken at the start of the Highway. I had read a lot about this little town. It was a regularly stop for people to get stickers, “I got laid in Chicken,” and to take cheesy photos behind wooden chicken cut outs.

Perhaps because it was early in the morning and dreary out that I just didn’t see the attraction. But that is me. I did get a photo though. 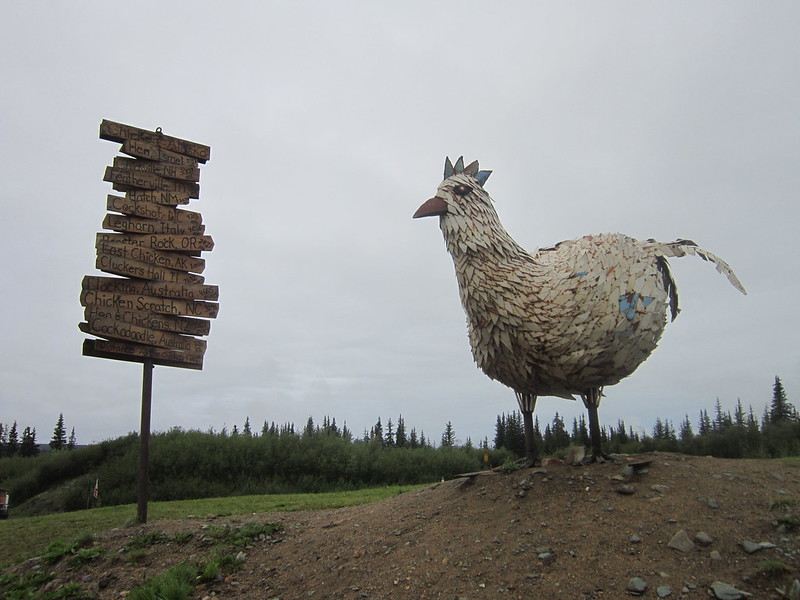 As I climbed up the Top of the World Highway I entered cloud and rarely left it. Sometimes I vcould barely see in front of me. Other times I encountered freezing rain pellets. My plans for great pictures were dashed. I did get these though during the cloud breaks. 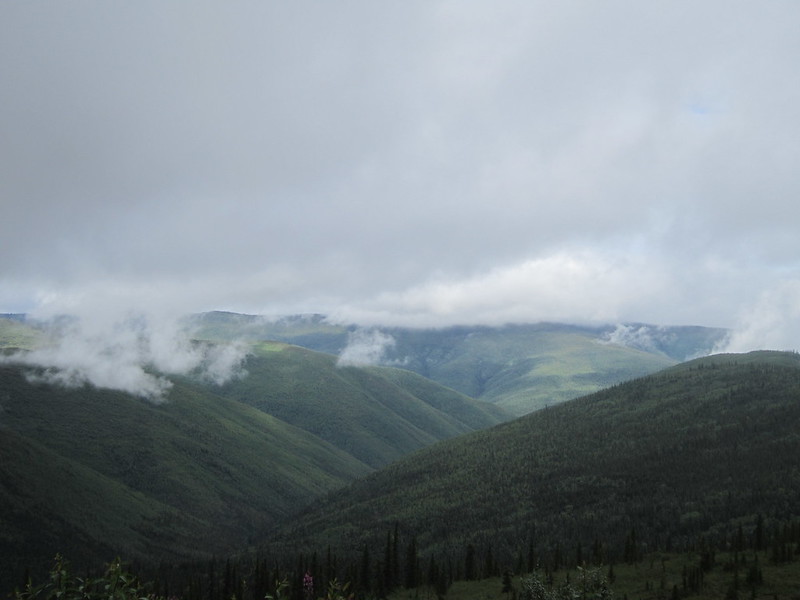 The road itself wasn’t very good. The rain made it muddy. And there were a lot of potholes.

Eventually I descended out of the cloud and Dawson City appeared. Very cool. To get to the city I had to get on a small ferry to cross the Yukon River. The river was running fast and I was fascinated to see how the ferry was going to navigate it. The river carried it downstream and then it had to turn around and power its way upstream to the earthen dock. 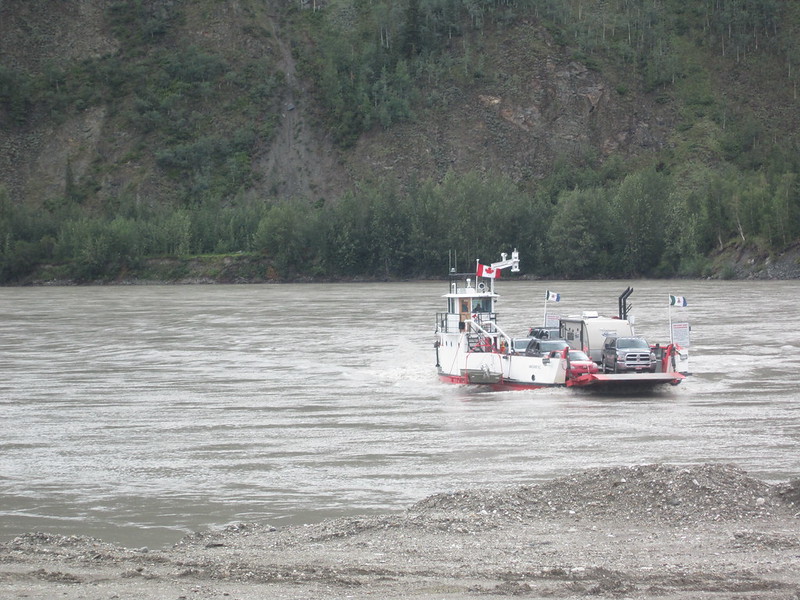 I rode on and the ferry powered its way upstream to the other side. 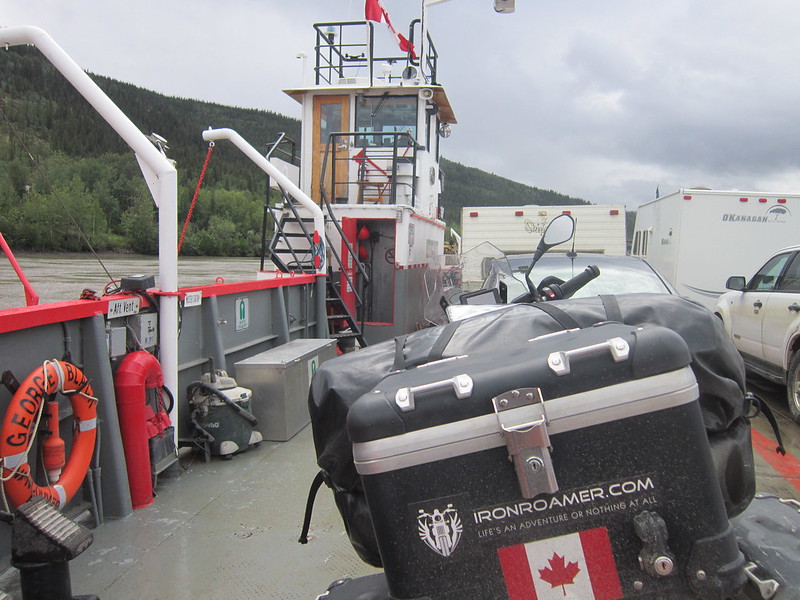 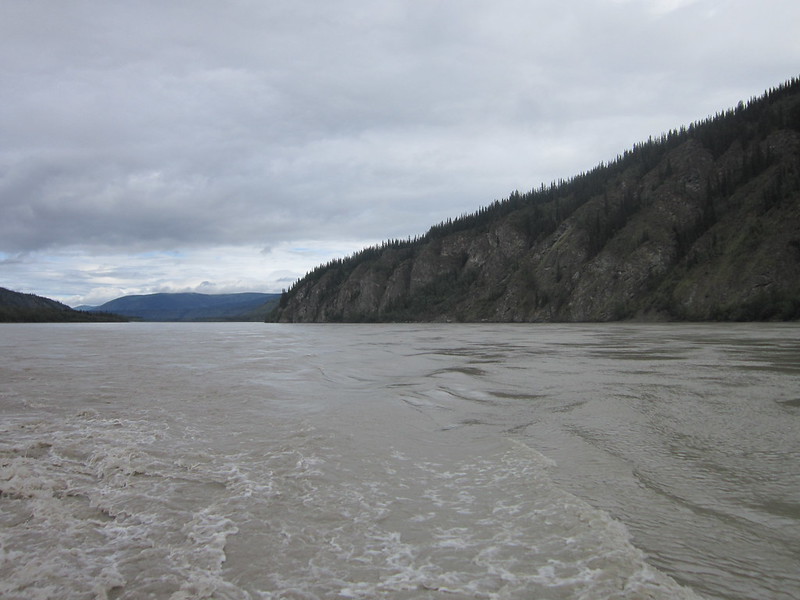 I was in Dawson City.The first thing I needed to do is get some coffee. I was freezing. I found Riverwest Bistro. 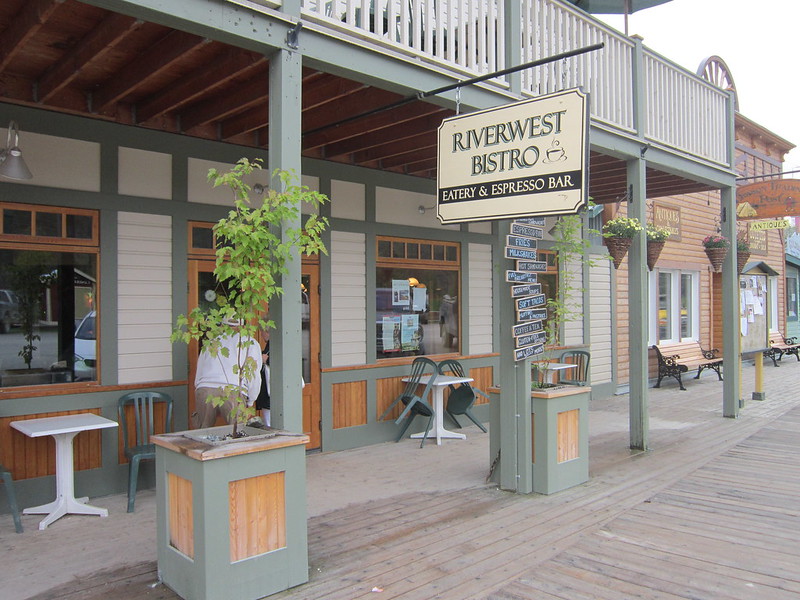 After I warmed up I went to the hotel I booked.

The Bunkhouse is the cheapest place in Dawson City that I could find. At $85 Can, you get a small, but clean, room with a bed. There are shared toilets and showers. The building itself is really cool, just like a lot of the buildings in Dawson City. I love the veranda! 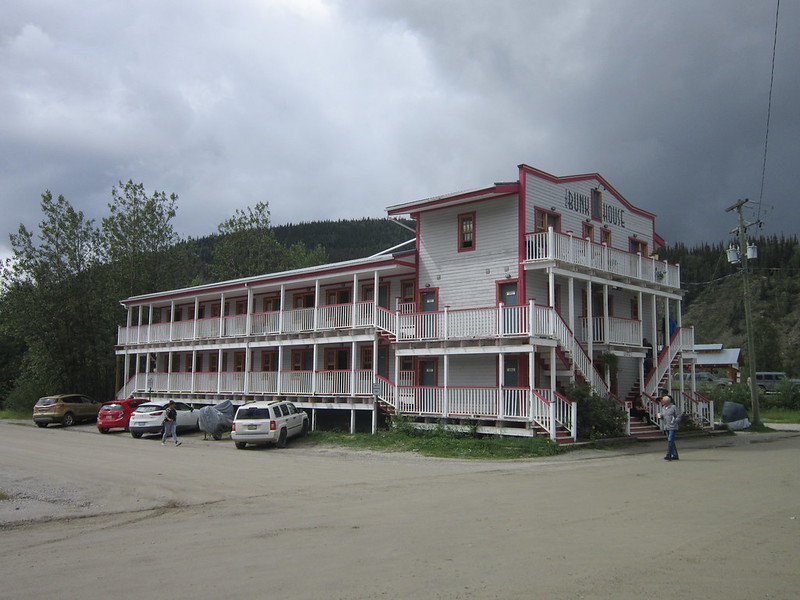 I had arrived early in Dawson City. After I had warmed up and checked in to The Bunkhouse, I decided to get something to eat. Trip Advisor said Klondike Kates was the place to eat. So off I went. 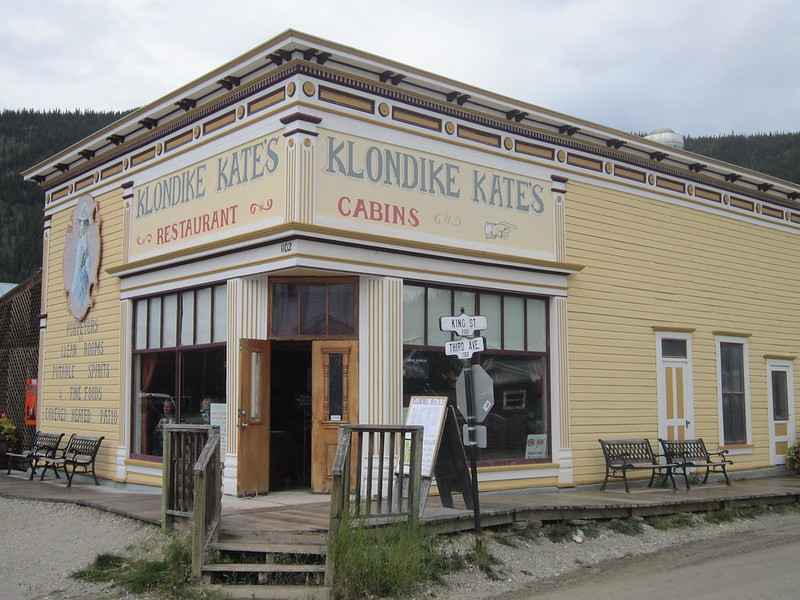 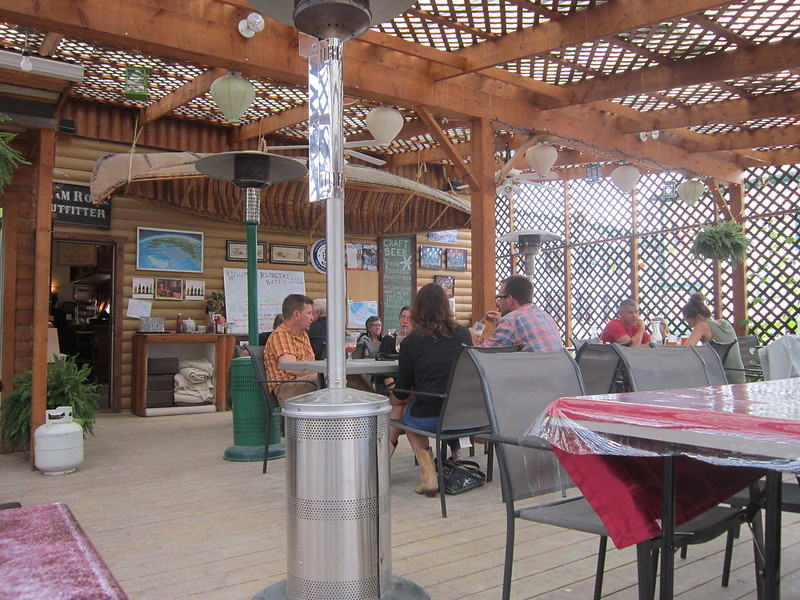