This was an unusual border crossing into Colombia as my motorcycle was entering via Avianca Air Cargo. I know I said in my last post that I was using Girag Air Cargo, and I did, but they in turn contract Avianca Air Cargo to fly my motorcycle to Bogota Colombia. It had me thinking though, why couldn’t I just use Avianca? I’m not sure. I haven’t read anyone using Avianca before, just Girag. Anyways, what is done is done.

My Entry into Colombia

My entry into Colombia was pretty basic. I flew from Panama City to Bogota Colombia via Avianca Air, passed through Immigration and I was in.

From there I took a “taxi” to the Hotel Golden near the airport so I could walk to get my motorcycle out of Avianca Air Cargo.

Now I put taxi in quotation marks because I made a rookie mistake. I thought I had made arrangements for the hotel to pick me up. When I got off of the plane they weren’t there. I ended up standing in the airport thinking about what I should do next. All I had was US money and I had passed the exchange booth on the other side of Customs and couldn’t see another one around me. As I was standing there a man approached me and said, “taxi.” Without thinking I said “yes.” I have never done that before as I know what that means. But before I got my thoughts together I was being escorted into a parking lot and an unmarked car. Oh well. I figured I would just go with it. The driver took me to my hotel and I ended up paying him $20 US. I am guessing way more than I should have. It was late now and I just wanted to go to bed.

The next day I walked from the Hotel Golden to where Avianca Air Cargo was. Except there was a fence around it and the entry point was guarded. The guard told me to go into the building and register. I have marked this number 1 on the map. 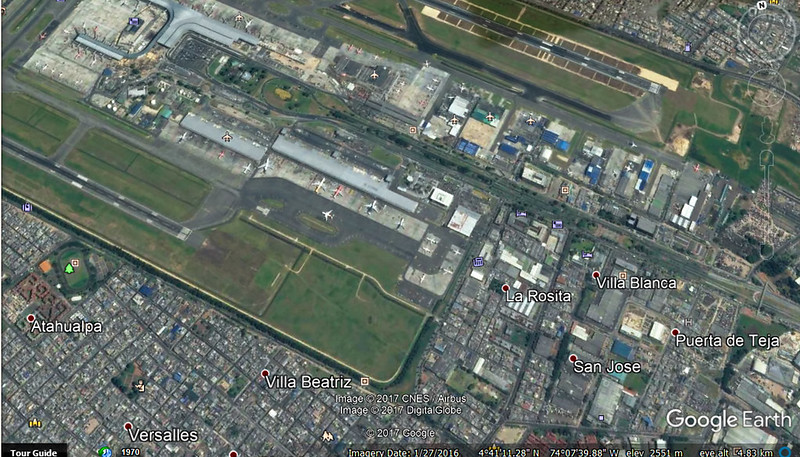 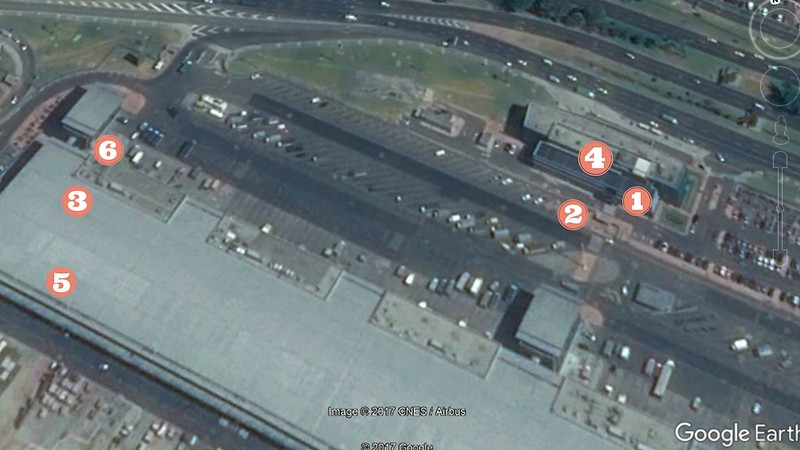 At the counter they wanted my passport and checked me in. I then went back to the gate at #2 and the guard carded me through.

From there I walked to Avianca Air Cargo. The first entrance I went to was the wrong one for me and a staff member directed me around the corner up to the third floor of the building that I marked as #3.

No one was at the desk in the lobby but I noticed that the door into the offices was not locking properly, so I walked in ha ha.

Language became a problem as no one spoke English. We had to rely on my Spanish! Eventually we got it sorted out and they found someone that spoke English. He gave me a bunch of papers and said to go to Customs at #4 on the third floor and they would sign the documents. When I was done, come back and get my motorcycle.

Off I walked to Customs. 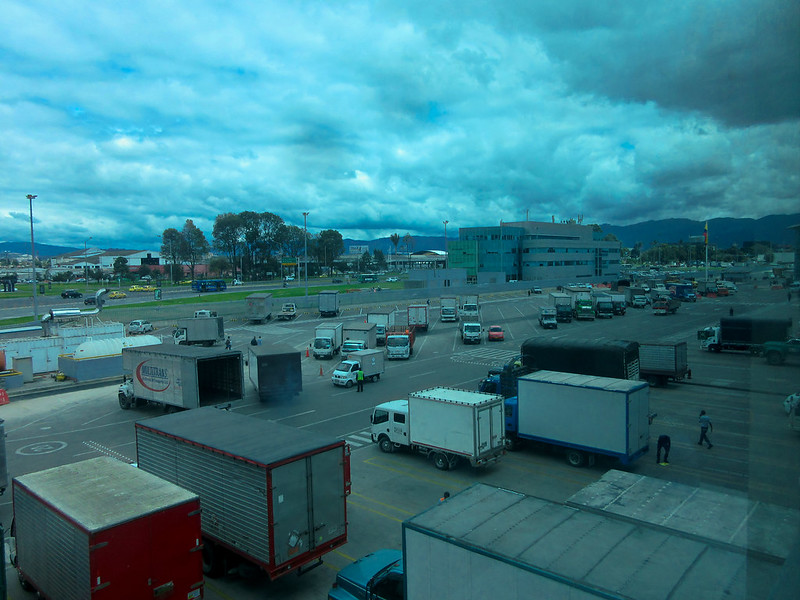 The same guard had to card me through to the elevators to get to the third floor.

When I got up there, this is what I saw. 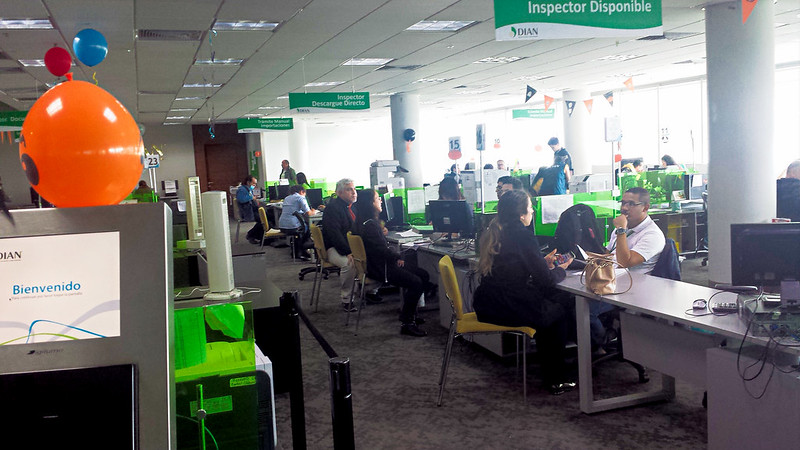 Not knowing where to go I asked the security guard. He pointed me to one desk. When I got there he directed me to the desk you can see in the middle of the picture with the white haired man and woman sitting at it.

The woman at the desk asked for my papers and then told me to leave ha ha. I just walked to where the picture was taken and just stood there looking at her ha ha.

Eventually, she waved me over and went through my documents. The officer didn’t speak English but luckily the woman you see in the picture jumped in and interpreted for me. What the officer wanted was a scraping of my VIN number off of my motorcycle. Ahhhhh …. my Spanish just doesn’t extend to things like that ha ha.

Back to Avianca Air Cargo

Soooooo back downstairs I went. The guard had to card me out of the building and back into the fenced compound where I went up to the 3rd floor of Avianca barged my way through the door that was suppose to be locked and went over to the woman who had been helping me. She got the English speaking guy and I explained what Customs wanted. He explained it to who appeared to be a warehouse supervisor. He was not happy.

Down we went to the warehouse where I had to check in, leave all my belongings at the desk, be searched, and wear these metal covers over my runners. Soon a tractor wheeled in my motorcycle all wrapped up in plastic and netting.

The workers uncovered part of it, took a felt pen to my VIN and then put a piece of tape over it and scratched an impression of the VIN onto the tape and put the tape onto a piece of paper.

With my VIN impression in hand I was back to the gate where the guard carded me out and carded me to the the elevators and back to the third floor where I went back to the officer. She looked at the impression and then passed me onto a woman you can see at the far end of the photo along the same row of desks.

She took forever to fill in paperwork both manually and in the computer.

Meanwhile, who walked in but Carlos who I met at Girag. It was like an old homecoming ha ha. His English is poor but still better than my Spanish. We just talked while the officer was filling out the paperwork. Once in awhile he had to interpret for me.

Eventually my paperwork was done.

Back to Avianca Air Cargo

Back to Avianca Air Cargo and the same routine with the Guard and the woman on the 3rd floor. The English speaker was there and he said to go downstairs and wait for my motorcycle. Down I went. 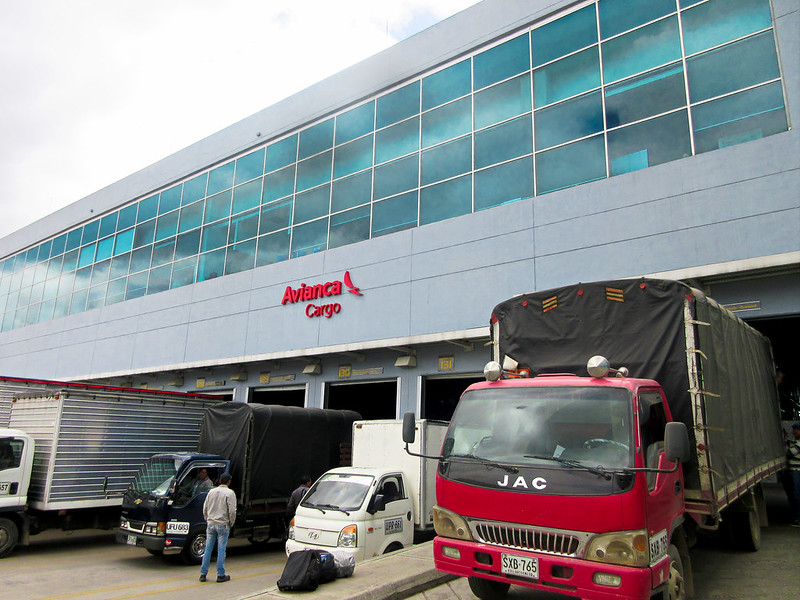 Eventually it was my turn to pick up. 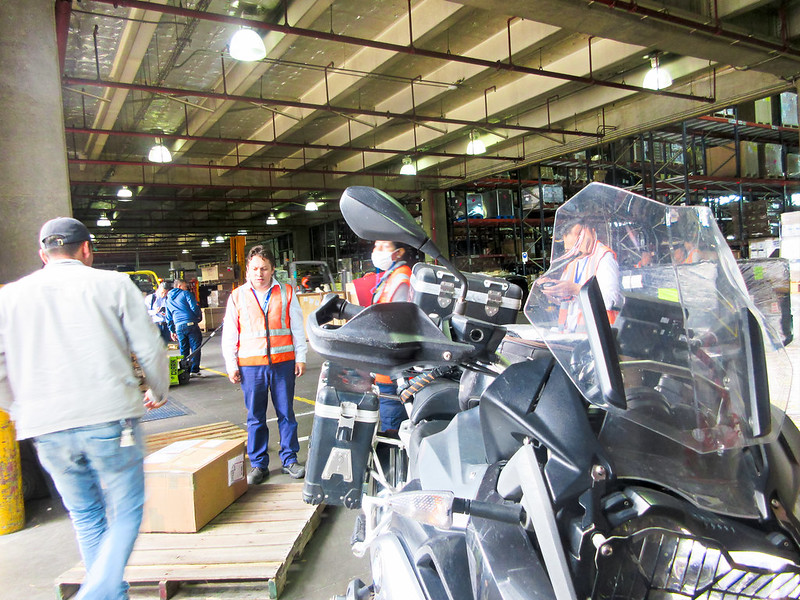 With my motorcycle and I finally into Colombia and reunited, I went back to the Hotel Golden. Now this hotel isn’t the nicest, but it is within walking distance to Avianca Air Cargo. And it is inexpensive. The area isn’t that great either. But is seemed safe. It reminded me a bit of an old run down English village. I had booked 2 days there just in case it took that long to get my motorcycle out. So I had a day to kill before heading into downtown Bogota to explore. 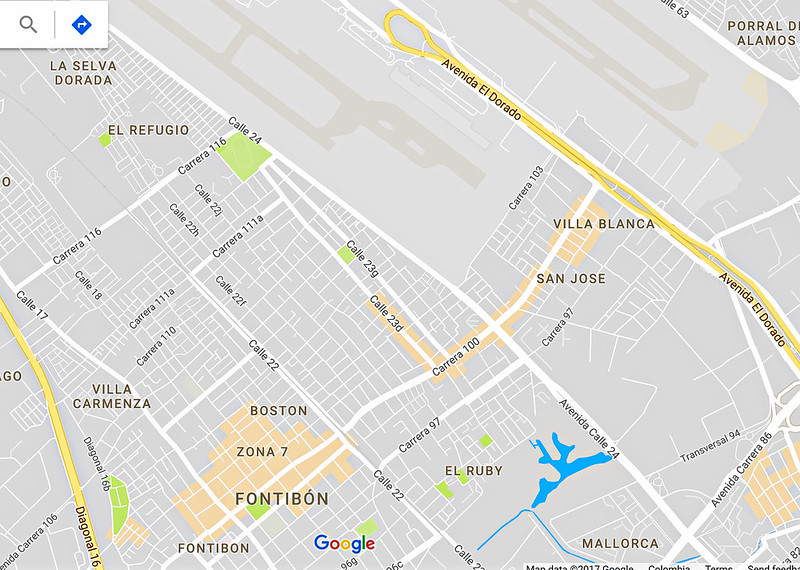