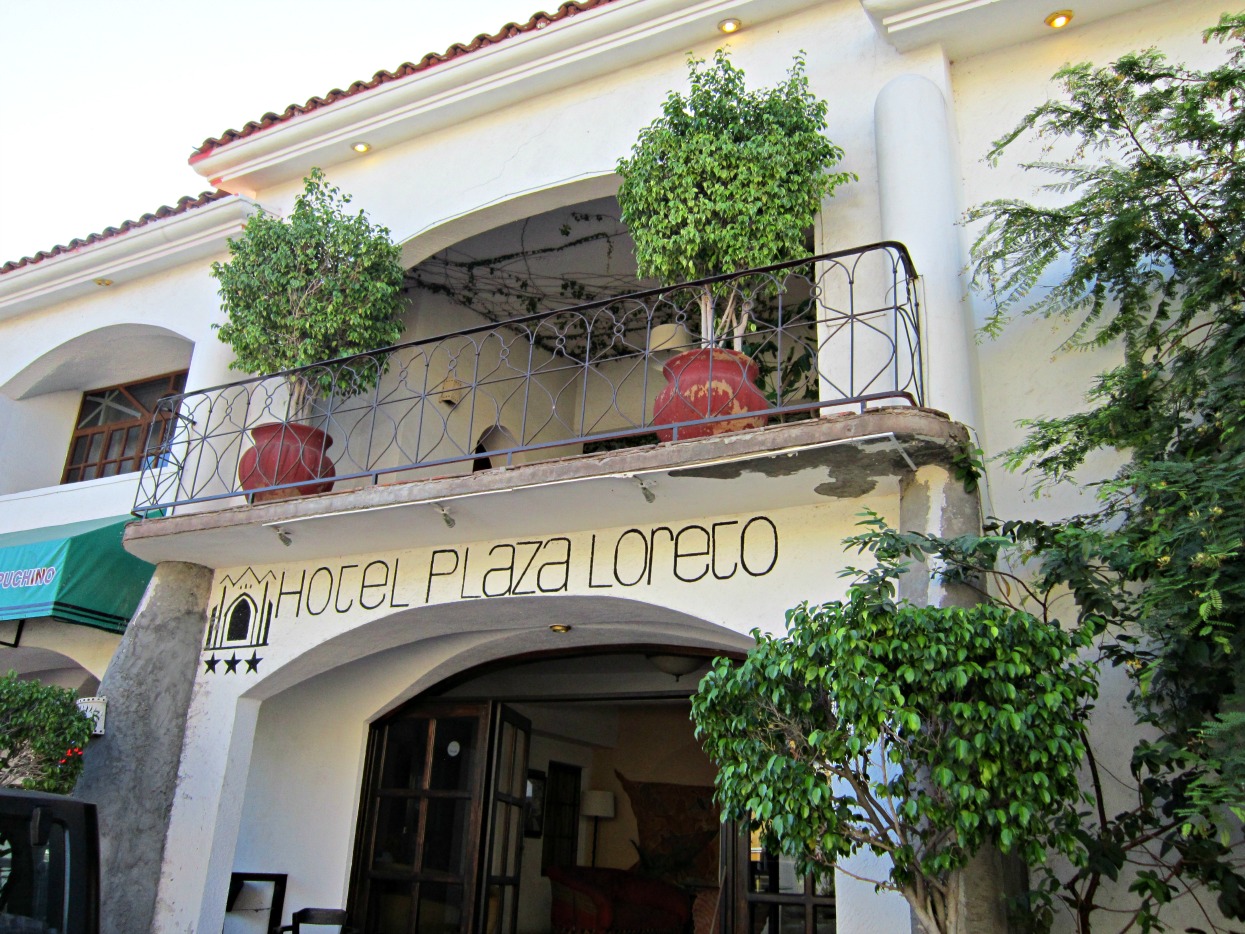 Sometimes the best surprises come after a long day’s ride. And believe me, this was a long day.

I left Malirrimo in Guerrero Negro nice and relaxed. It was partly cloudy. The coolness was appreciated though. 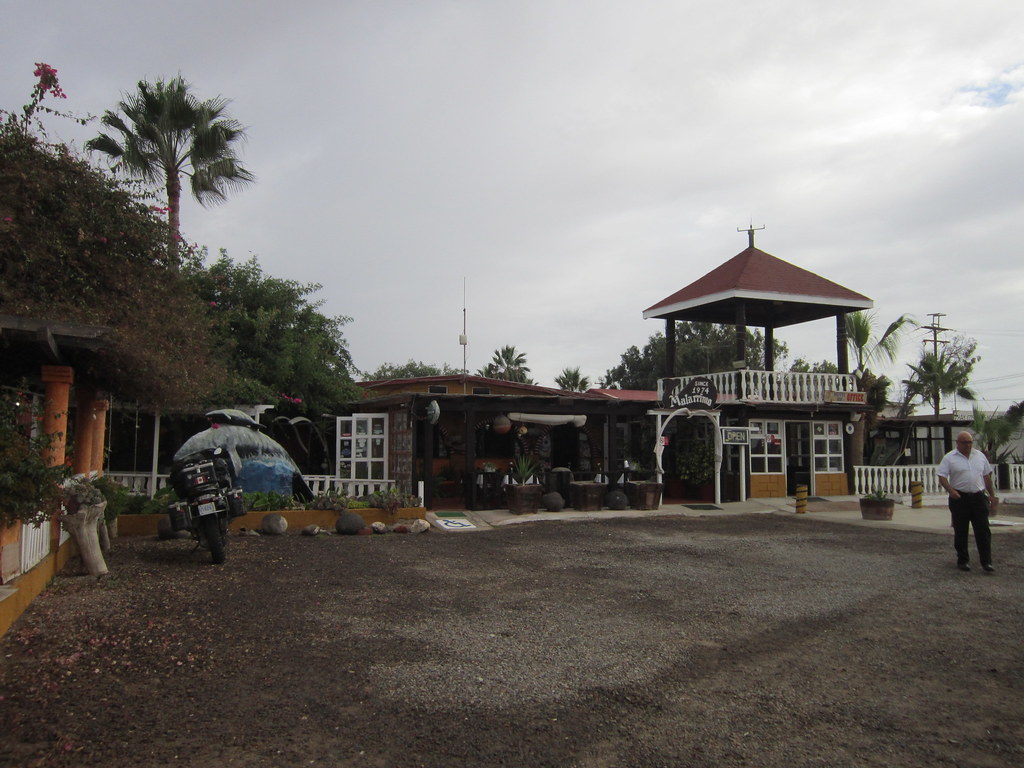 The plan to to head to El Vizcaino to see if I could do some whale watching.

As I made a right turn to head down the road to the UNESCO sanctuary, it started to spit rain. The road seemed to go on forever. And I would have to come back the same way! About 40 km down the road I got frustrated. I thought to myself that I have seem lots of whales before. I have gone whale watching in Tofino on Vancouver Island and in Newfoundland. Heck, I have seen lots of whales just crossing on the ferry between Sydney and Tsawwassen back home.

Between the spitting rain, the length of the road, having to turn around and do the same road back, and having seen lots of whales before, I decided to turn around right there.

One way you can tell I am frustrated is by the lack of photos ha ha ha.

The plan was to stop for the night at Santa Rosalía. A blog I read recommended a hotel there.

As I made my way there I encountered “herds” of butterflys! What do you call a herd of butterflys? I am sure it is not a herd huuummmmm. Anyways … they were hitting my glasses, face, windshield, and getting into my helmet. I was ducking, bobbing and weaving as I was riding. I felt like Mohammed Ali!

Finally arriving a Santa Rosalía, rode around looking for the hotel. My impression of the town was that it was a mining town. I had passede a big mine entering the town. The town was decrepit and dirty. It had character though. I’ll give it that.

When I finally found the hotel it just wasn’t appealing. My frustration was kicking into overdrive.

The next town was Mulegé. I decided to give that a try.

Mulegé was a bit nicer. I just rode around looking for a place to stay. Nothing was appealing. I did see a campsite that looked good. But by this time I was in no mood. I just wanted a nice hotel with air conditioning. By this time it was hot, which was adding to my frustration.

I decided to make the ride to Loreto which was a hour further down the rode. The views were awesome. But I was frustrated. hence no pictures ha ha. I was definetly speeding as I made my way through the curves and past really nice camping spots on the beach. Perhaps if I wasn’t so frustrated i would have stopped at one and camped.

I finally reached Loreto. I was going to stay here no matter what. The hotel search began.

I checked out one hotel – a dive.

As I rode around I stopped at the least nice looking expensive hotel ha ha thinking that maybe it wouldn’t be too far out of my price range.

As I waited for a front desk staff to enquire about prices, I looked outside at their pool. There I spotted a guy at the pool bar drinking a pint of beer from a frozen mug ahhhhhhhhhhhh. I wanted that. Around the pool were a couple of nice looking women in bikinis. From the pool spouts of water were shooting out.

At that moment I would have paid anything!

A fro nt desk clerk came up. I asked about the price and the cheapest was $138 USD. WAY out of my range. I asked for something a lot cheaper. He recommended the Plaza Loreto.

As I rode around though I began to like Loreto. It was very quiet and clean. Beautiful! 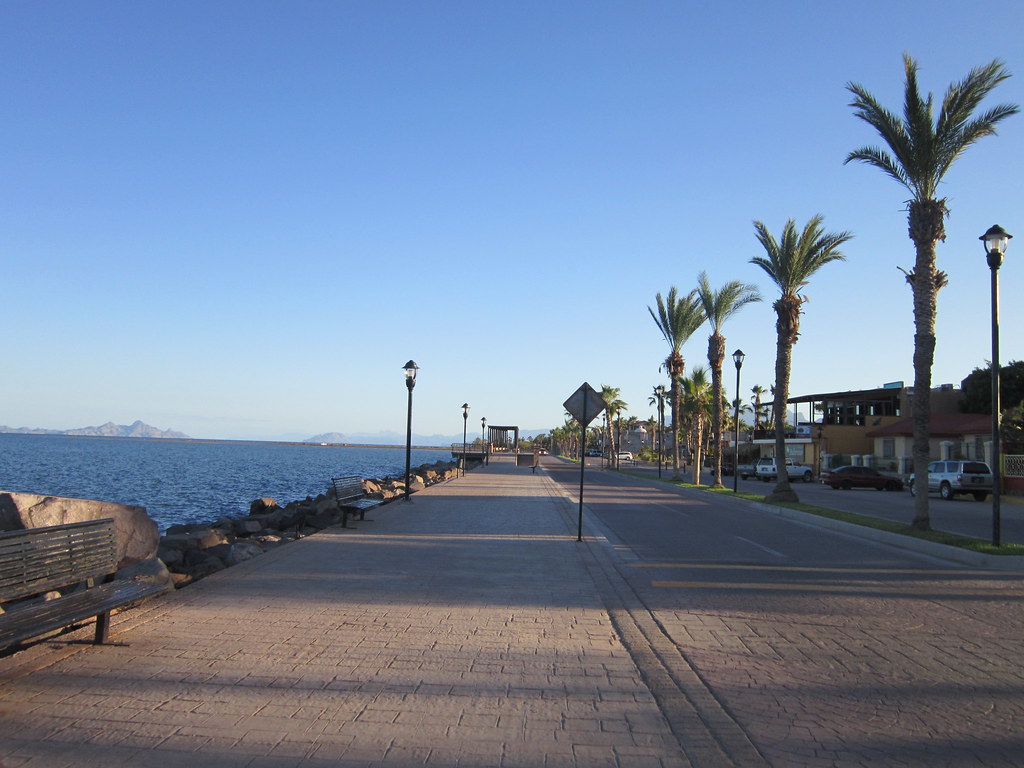 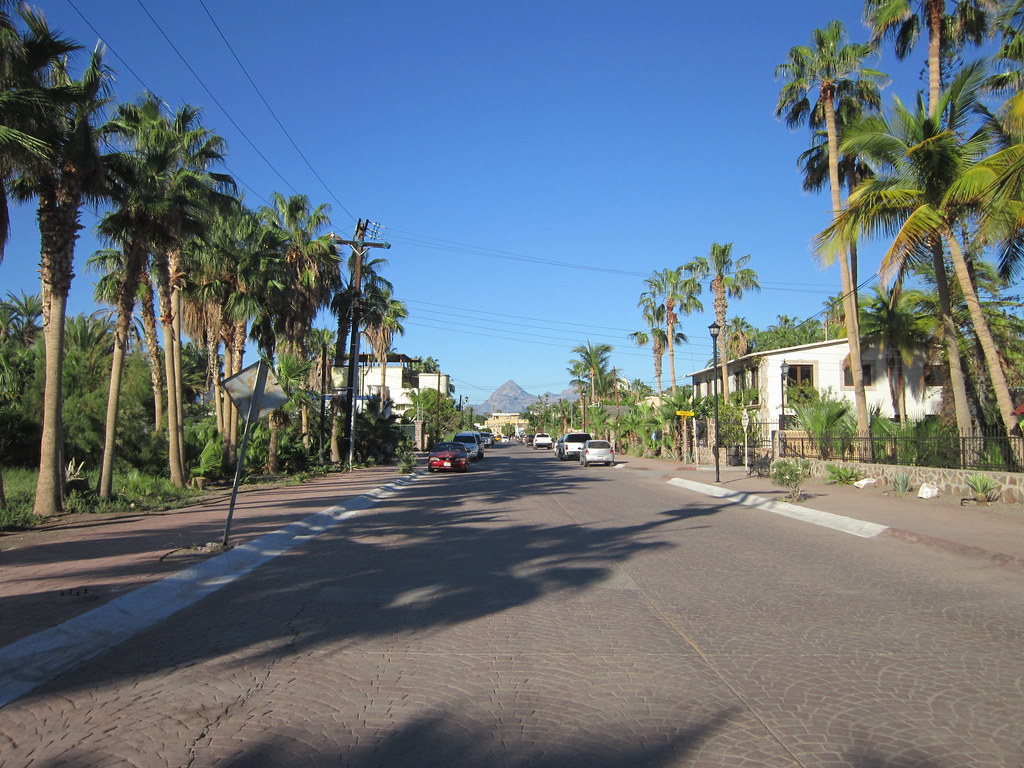 The Hotel Plaza Loreto was perfect. It was right “downtown” Loreto, in my price range, the people were soooooo nice, and I was offered a place in a compound to park my bike. 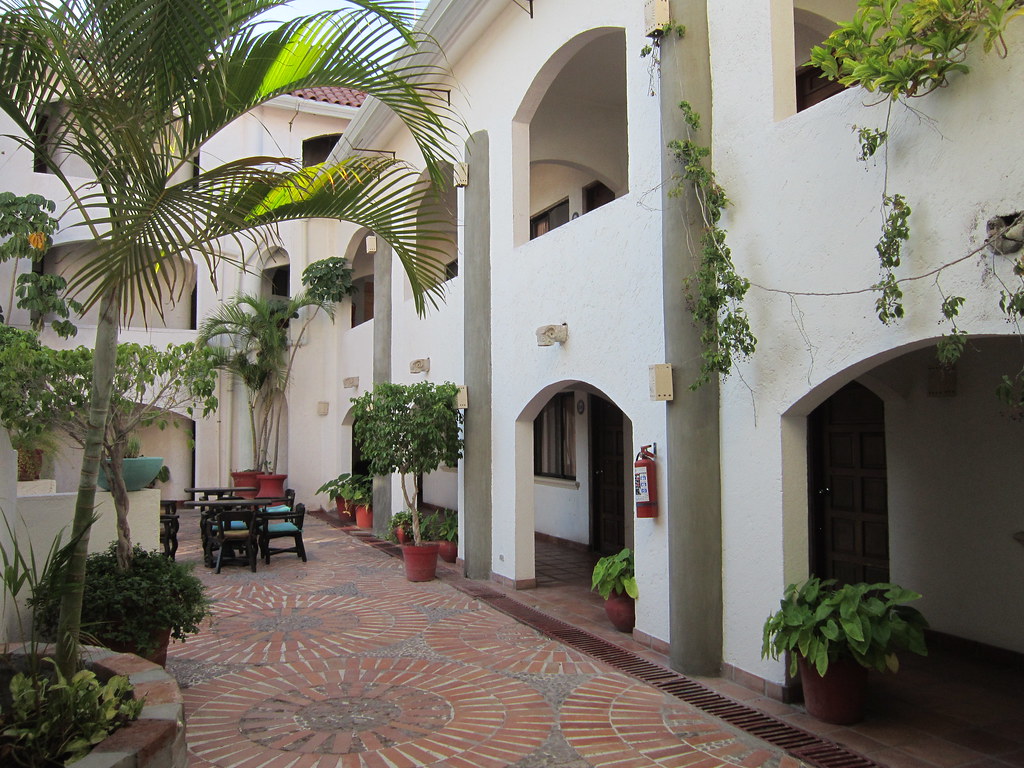 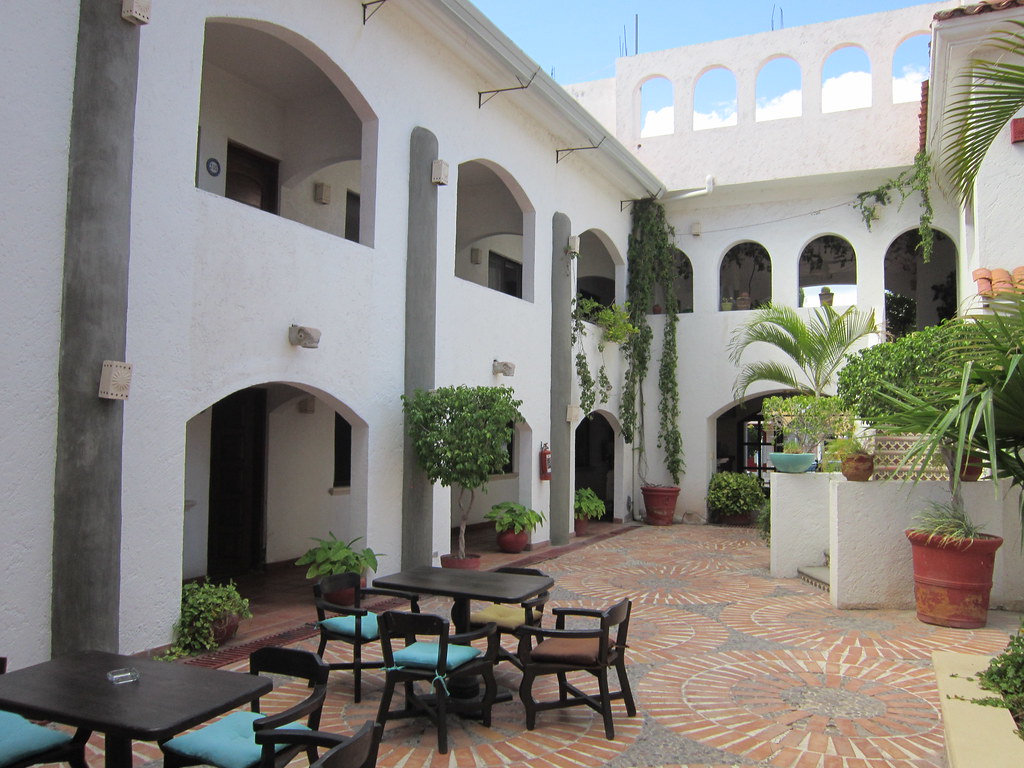 I decided to spend another night here and enjoy what looked like an awesome town. One of the advantages of having no real commitments or plans. 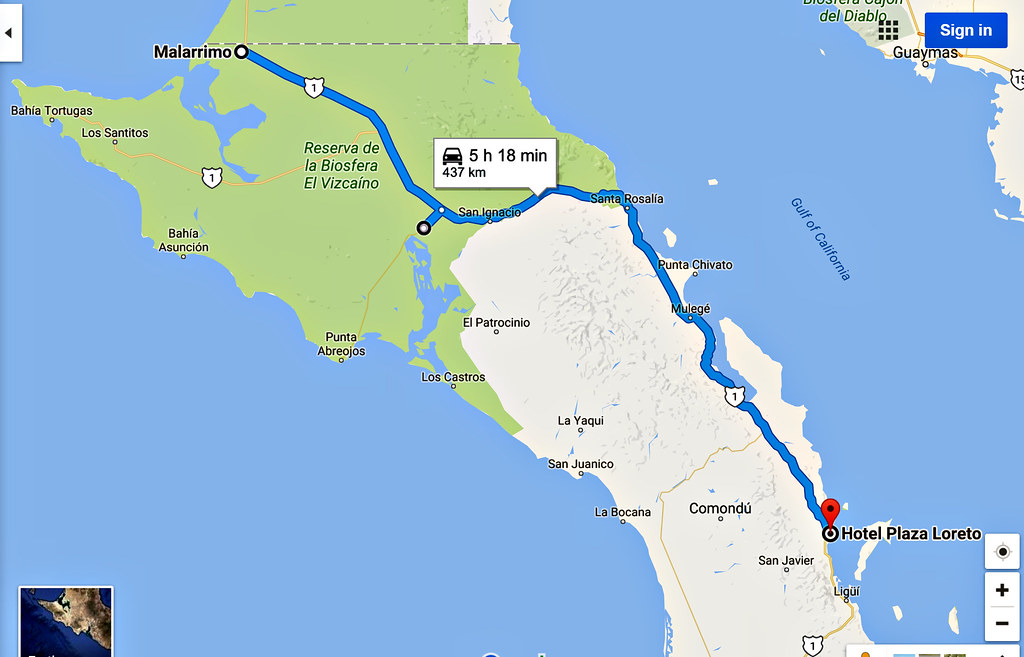