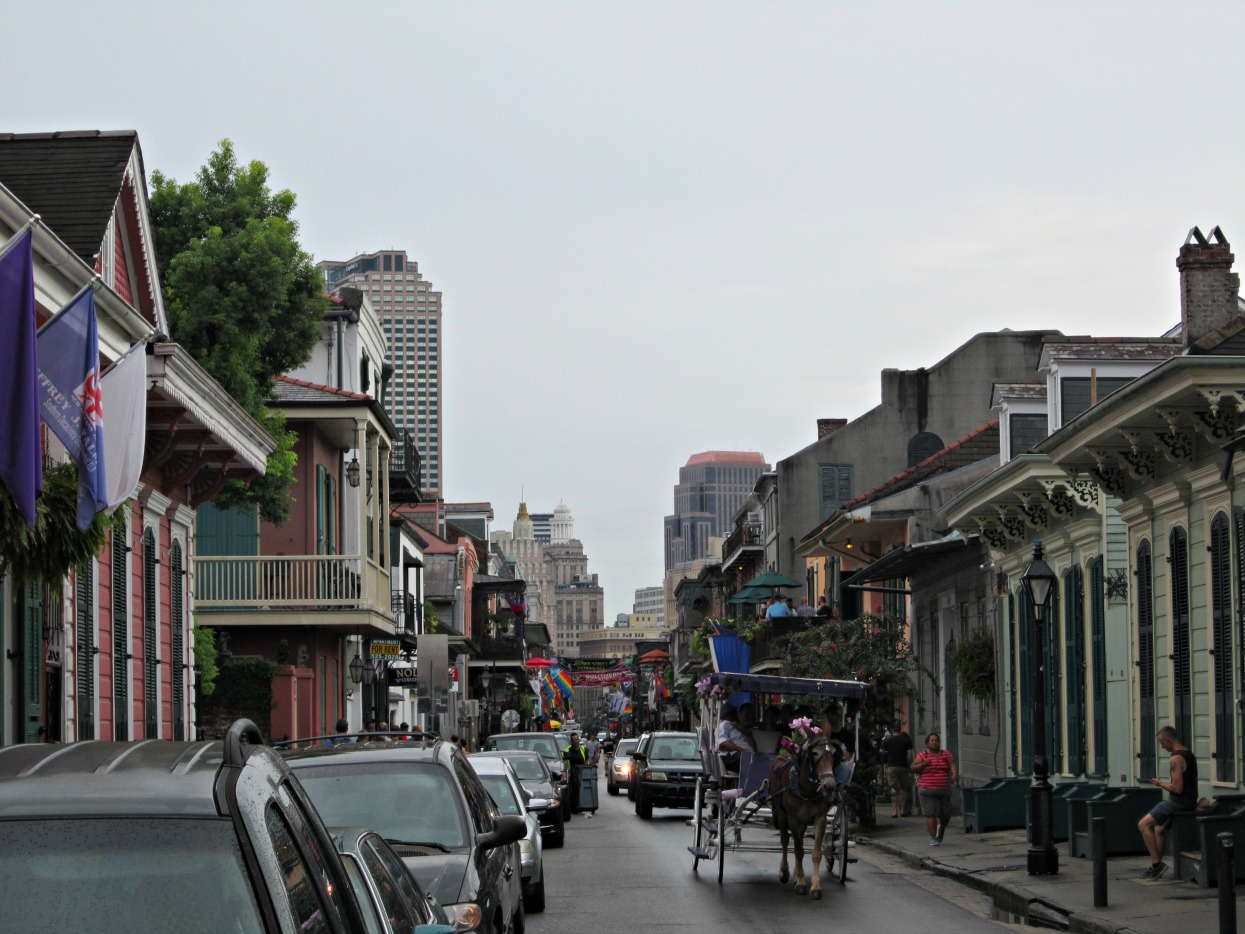 OK, I know things are suppose to be positive, especially in New Orleans. And I have been accused many times of being negative, which makes me sad. I am trying to improve on that. Actually, I planned on doing more personal development on this trip, but there just doesn’t seem to be time. I need to make it a priority. But I digress.

It basically rain from the morning to late afternoon in New Orleans. I spent most of that time sitting around the Sheraton Hotel people watching. My mind wandered to other trips to New Orleans where I stayed at the Sheraton, Marriott and Hilton. Those were different days for sure. It helps when they were business trips and the government was footing the bill.

So there I was, people watching at the Sheraton. I have to admit it was a bit depressing. Complicating matters was that I was developing a cough as my lungs were getting fluid in them. I explain more about that in my next daily journal entry.

Occasionally the rain broke for a bit. When it did, I darted out to visit different places. One of them was the New Orleans Riverwalk. This is basically a long indoor mall along the Mississippi River starting at the Hilton Hotel. There is also outdoor patios along the way with great views of the river. 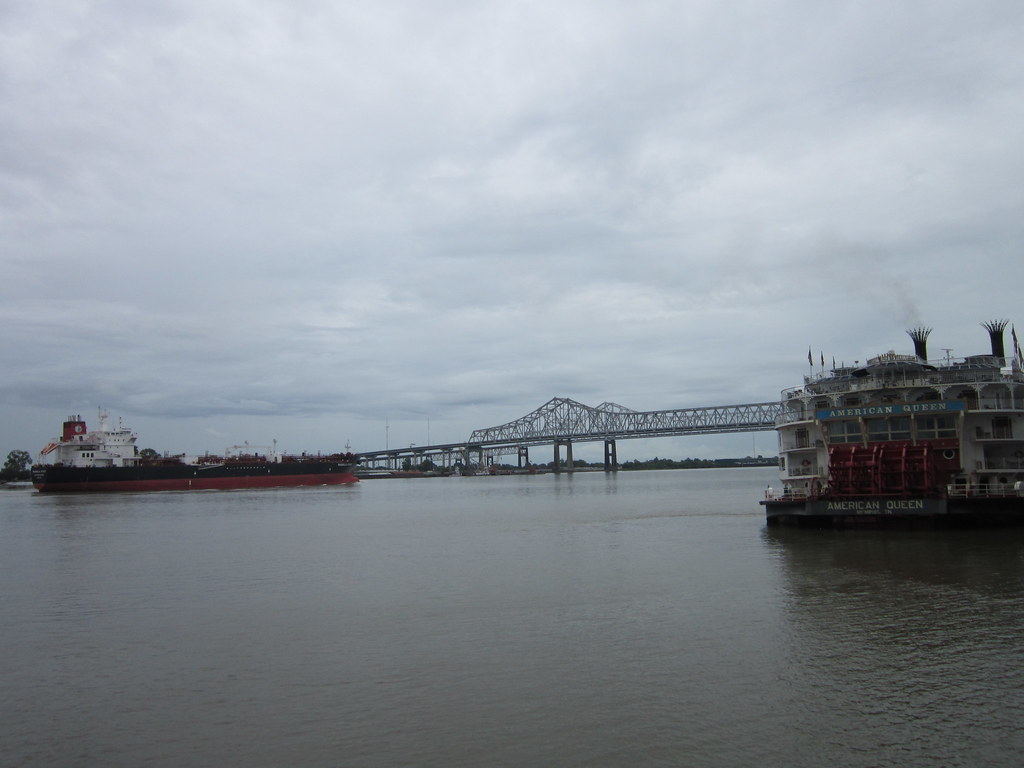 Another place I managed to make it to was CC Coffee shop on Chartres Street. This is another favorite place of mine in the French Quarter to escape the heat. This time is was to escape the rain. I had a bottle of Swamp Pop. 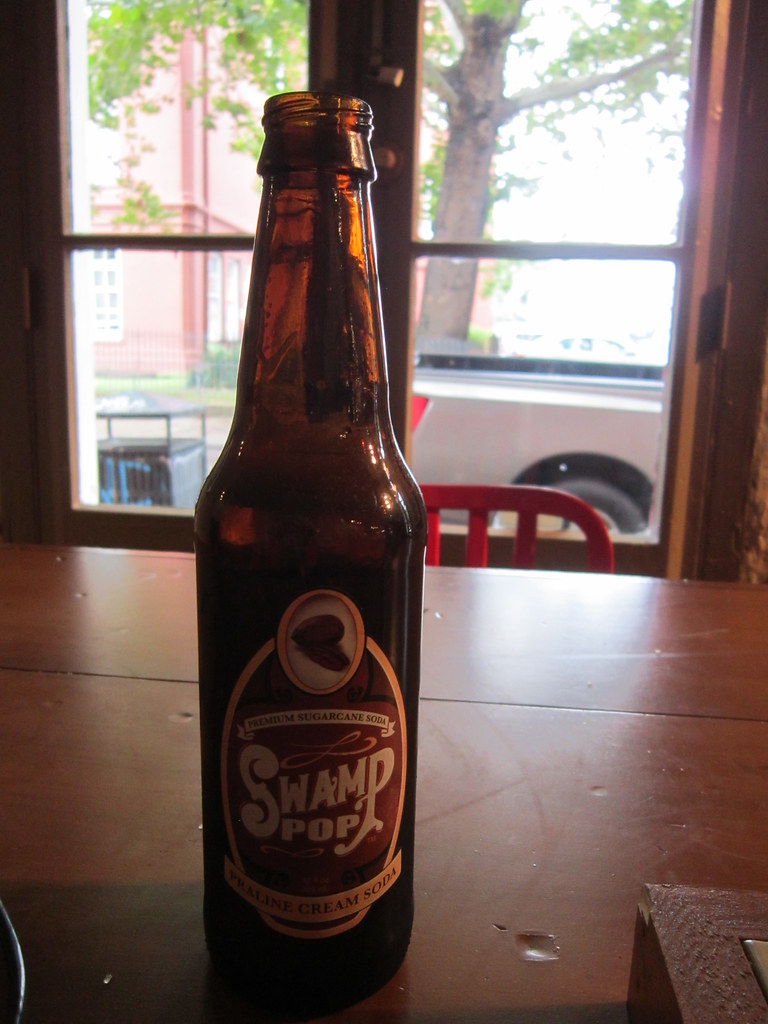 I passed by Lafitte’s Bar at the end of Bourbon Street.

The building was constructed in the 18th century and is one of the older surviving structures in New Orleans. It has been called the oldest bar in the US.

According to legend, the pirate Jean Lafitte (c.1780–c.1823), aka John Lafitte, owned a business here early in the 19th century. As with many things involving the Lafittes, such as possibly using this place to plot illegal seizures and the sale of contraband, no documentation exists. (It was only after the Lafitte brothers were long gone that Jean’s signature was found on a document, finally ascertaining how their family name was spelled: LAFFITE.)

It is purported to be one of the more haunted venues in the French Quarter. Lafitte’s associates may have operated a smithy here during the days of reliance upon horses, who had to be shod. Jean’s older brother Pierre Lafitte was a blacksmith, and their associate Renato Beluche may have once owned this building.

In the mid-1940s Tom Caplinger turned the old abandoned shop into Café Lafitte. The cafe became a popular night spot that attracted a bohemian clientele, including the gay community and celebrities like Noël Coward and Tennessee Williams. However, Caplinger never held clear title to the property and the building was sold in 1953. He soon opened a second cafe at the other end of the same block named Café Lafitte in Exile, which maintains that it is the oldest gay bar in the U.S.

Anyways … the Lafitte cafe bar was declared a National Historic Landmark in 1970. 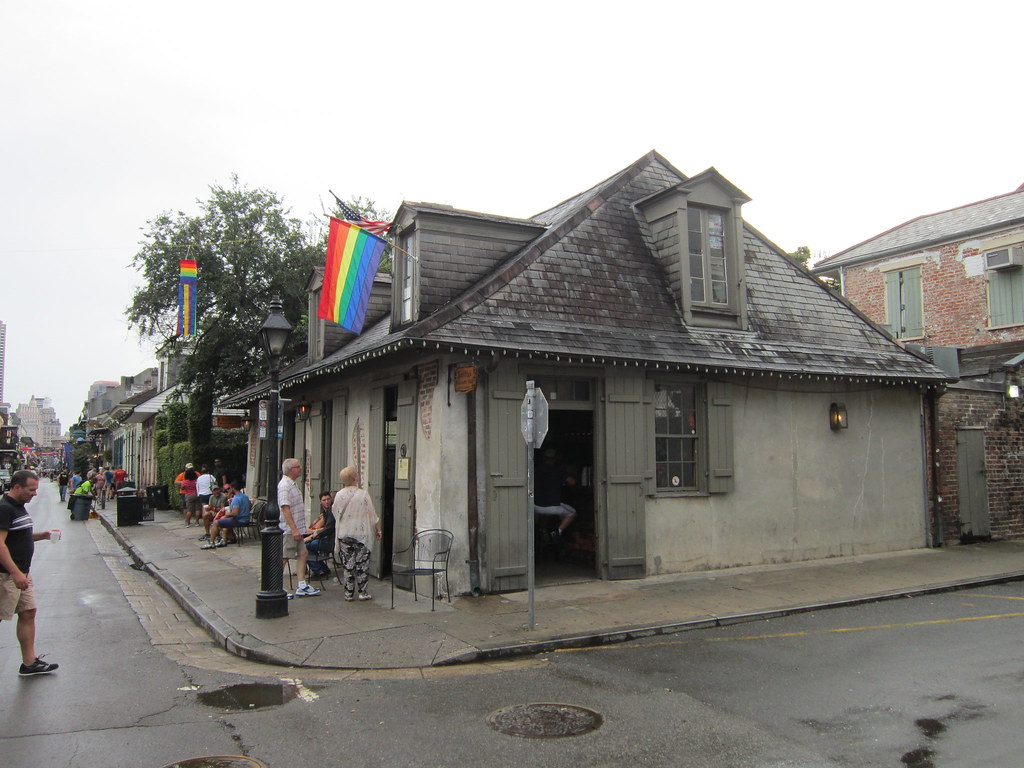 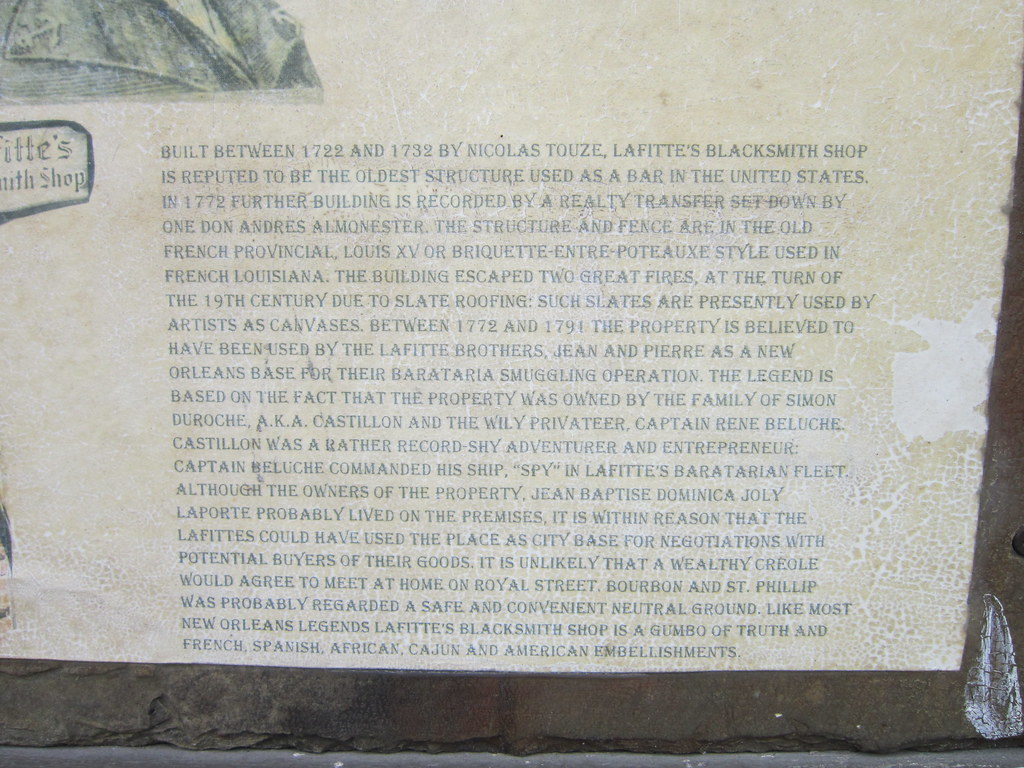 After an expensive $6 beer in a sit down pub, compared to the cheap $3 beers you can get on the street, I decided to call it quits for the day. I took the Canal Street tram to Jefferson Davis Parkway where I walked back to the hostel.

I found it a bit strange this day and age to have a Jefferson Davis Parkway. On the other hand, it is history.

The Parkway has a big statue of Jefferson Davis. 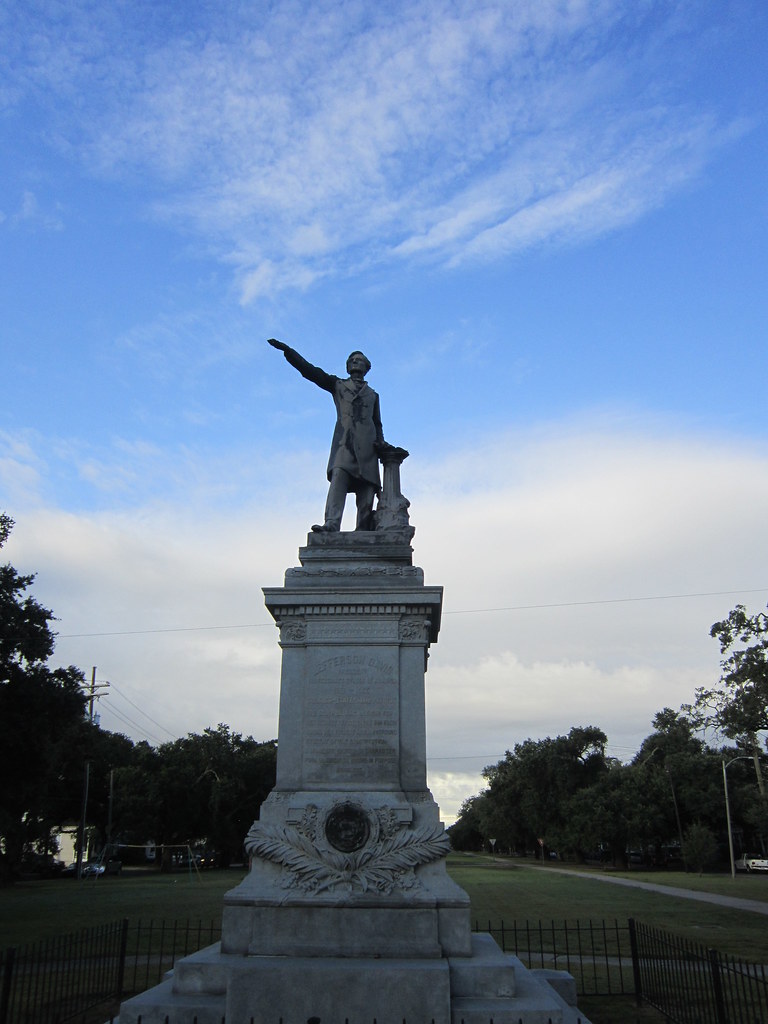 Jefferson Davis was sworn in as the President of the Confederate States on February 18, 1861. He died in New Orleans, Louisiana on December 6, 1889.

This statue was erected in 1911. It is suppose to be removed at some point and was recently vandalized. a lawsuit blocking the removal is currently underway.

I did feel a bit strange advising the African-American tram driver that I wanted to get off at Jefferson Davis Parkway. I wondered what it must feel like for him to have it there.

For some reason I can’t get it to show that I actually walked up and down Jefferson Davis Parkway. 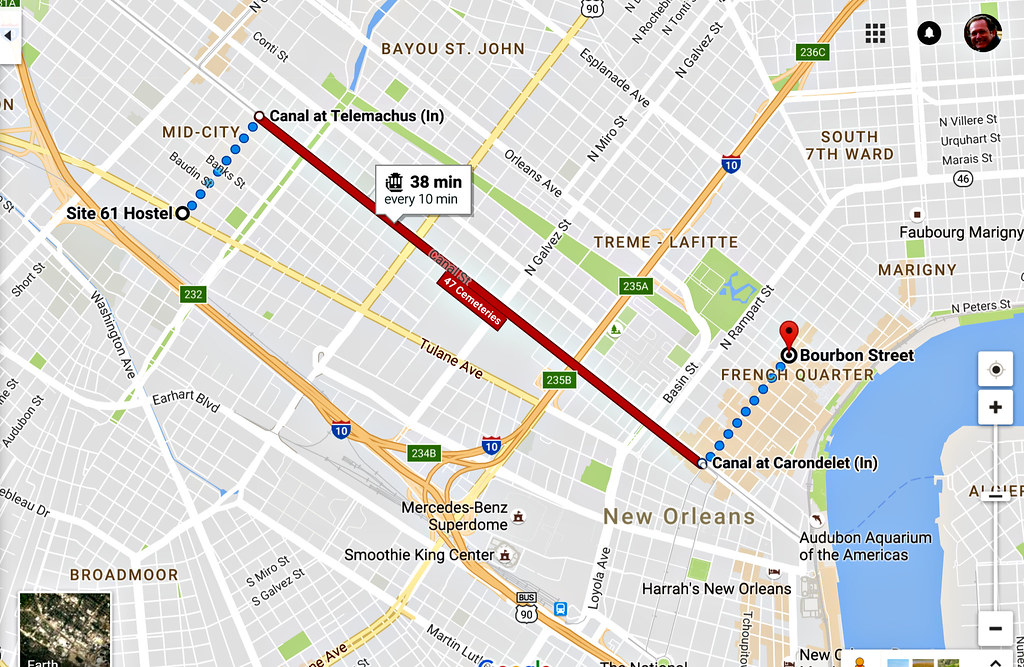