Crossing the Border into Guatemala

After a relaxing time in San Cristabol it was time to tackle the border into Guatemala. I first wanted to get a little closer to the border. But not too close as border towns are infamously chaotic places. I chose Comitán de Domínguez.

I arrived early to Comitán. As usual the weather forecast was for rain everyday. But I am discovering the pattern. It is nice in the morning and afternoon. Then late afternoon and into the evening it rains or thunders. So the plan was to get to Comitán before the rain started.

Comitán surprised me! What a nice place. Hardly any foreign tourists and the town plaza was beautiful. 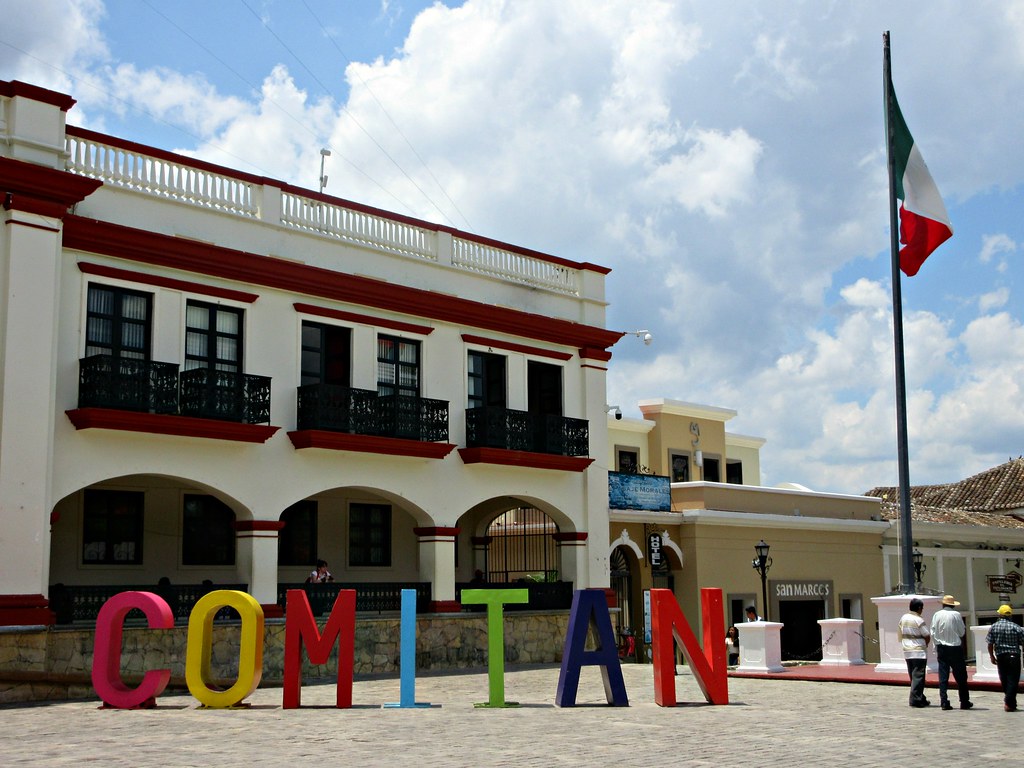 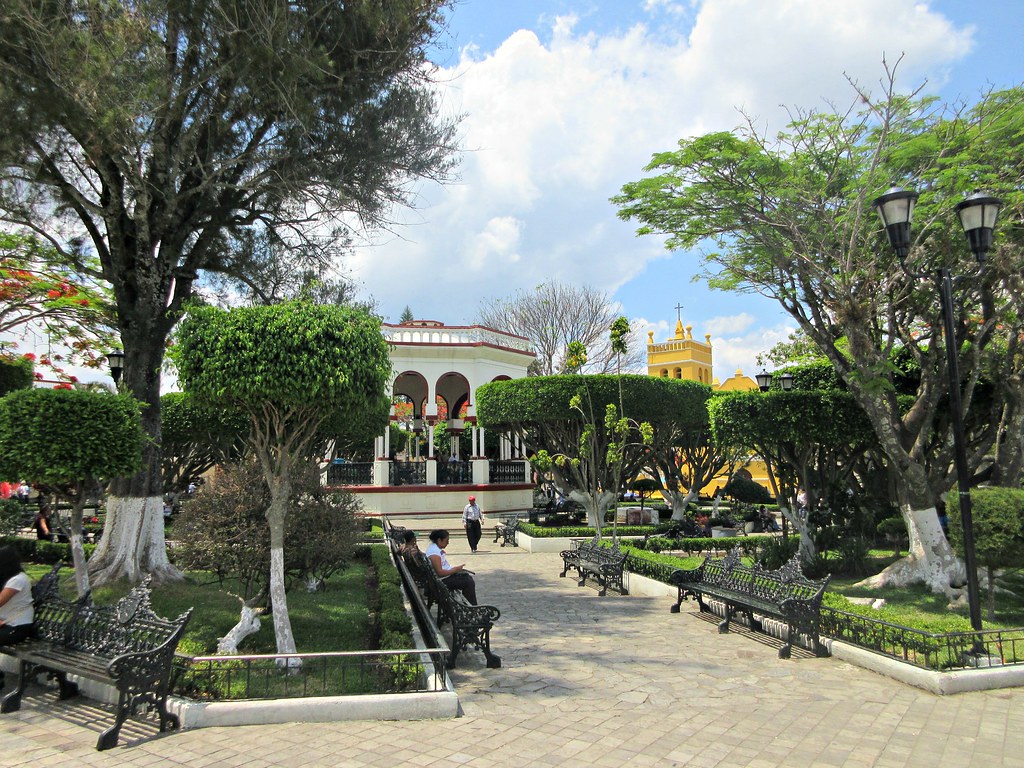 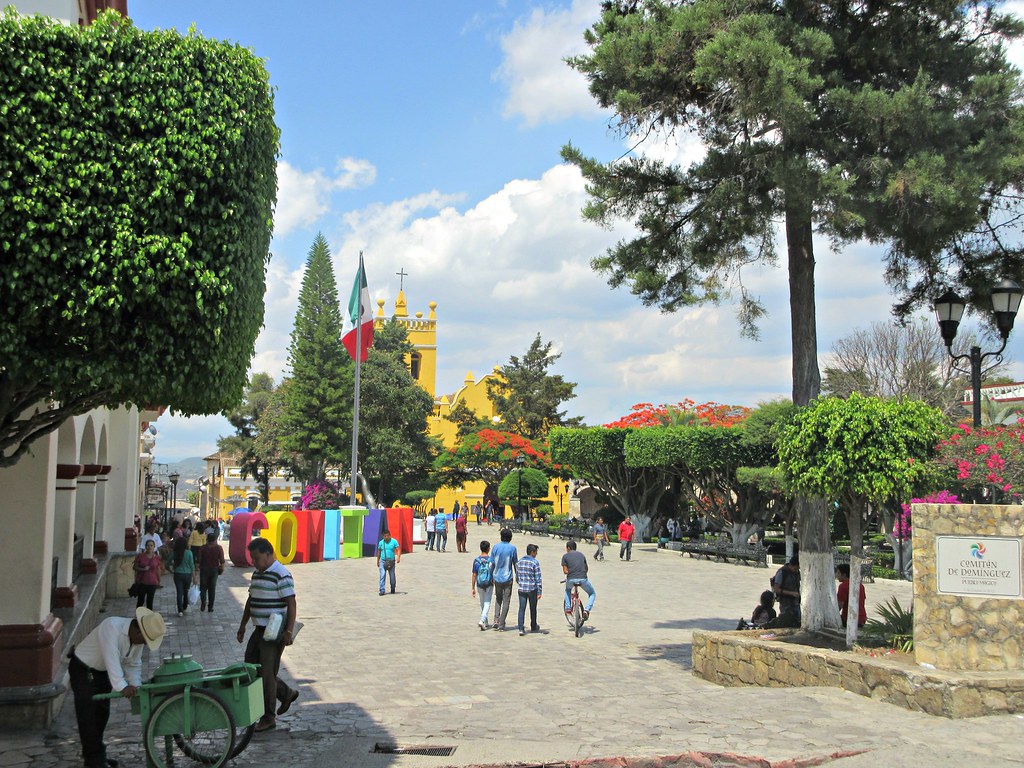 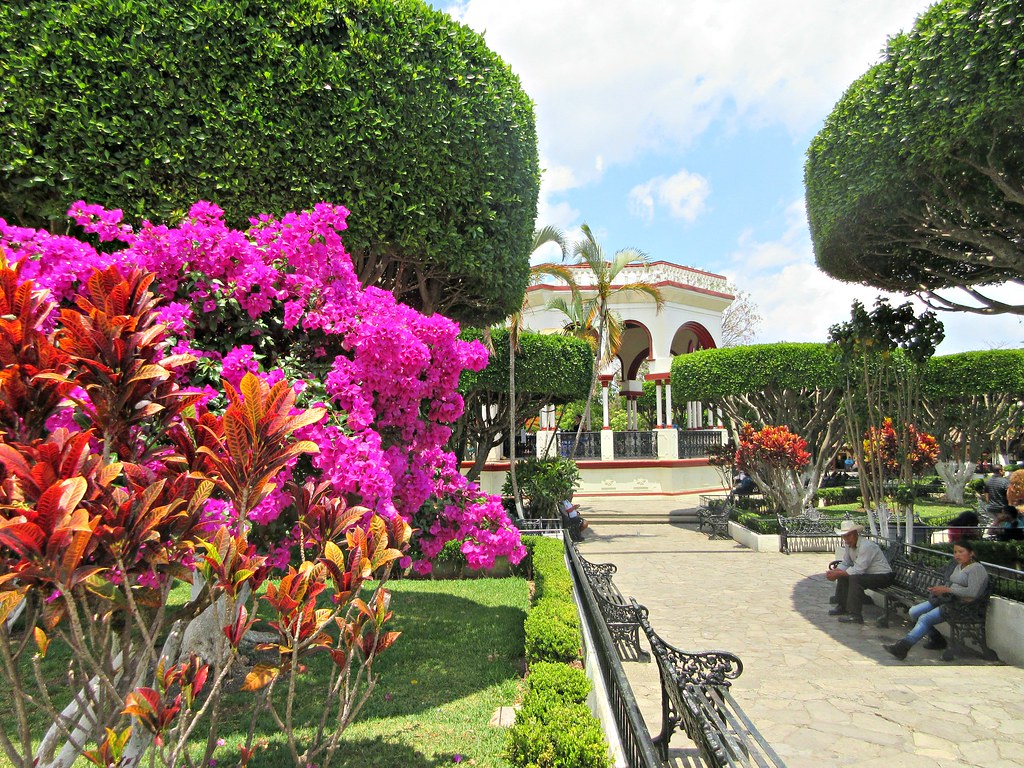 Of course there were the usual amazing churches. 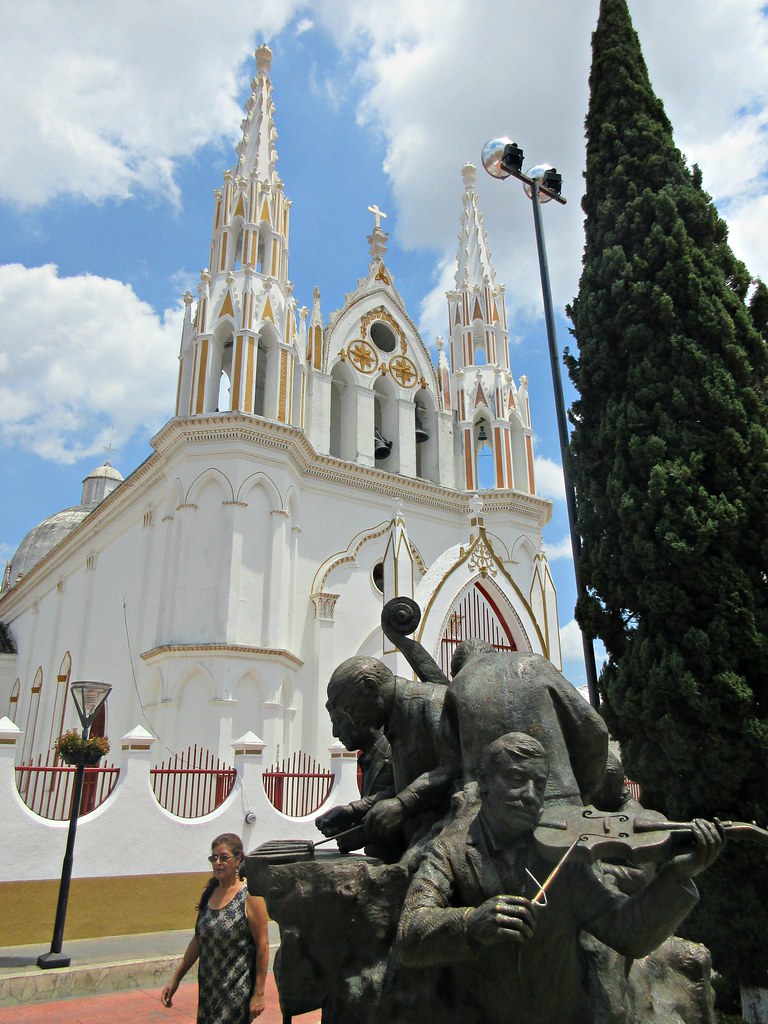 Then the rain struck. 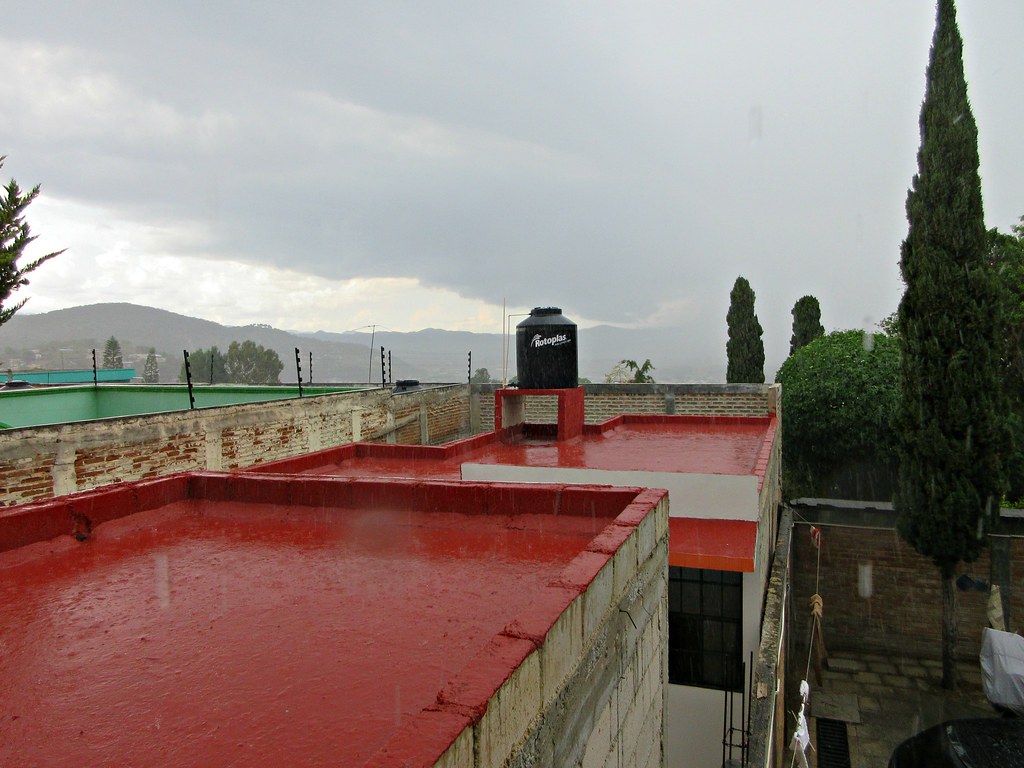 Checking out of Mexico

The next day I tackled the border into Guatemala at La Messila. I had done some research but there wasn’t the detail I wanted to really understand where to go etc. So hopefully here I can provide a little bit more for those who may wish to follow.

First I needed to check out of Mexico. Where to go? Where to go? As I got close to the border I saw on the other side of the street some buildings that looked like an Aduana. I turned around and headed back.

No one was around. I walked into building #1 in the photo and was greeted by a security guard. He said to wait a minute. A little bit later an older man came to the desk. He looked at my passport, visa, and my 500 peso entrance fee paperwork. He handed my passport back and that was it. He didn’t say a word.

As I walked outside, another security guard asked me to pulled my motorcycle up to building #2. He then directed me to the Banjercito bank booth and told me to wait.

Eventually a gentleman came and took my paperwork for the $400 USD temporary import permit for my motorcycle. He then went outside and took a photo of my motorcycle VIN and came back inside. Moments later he handed me back $400 USD and that was it! Pretty simple. No hassle. 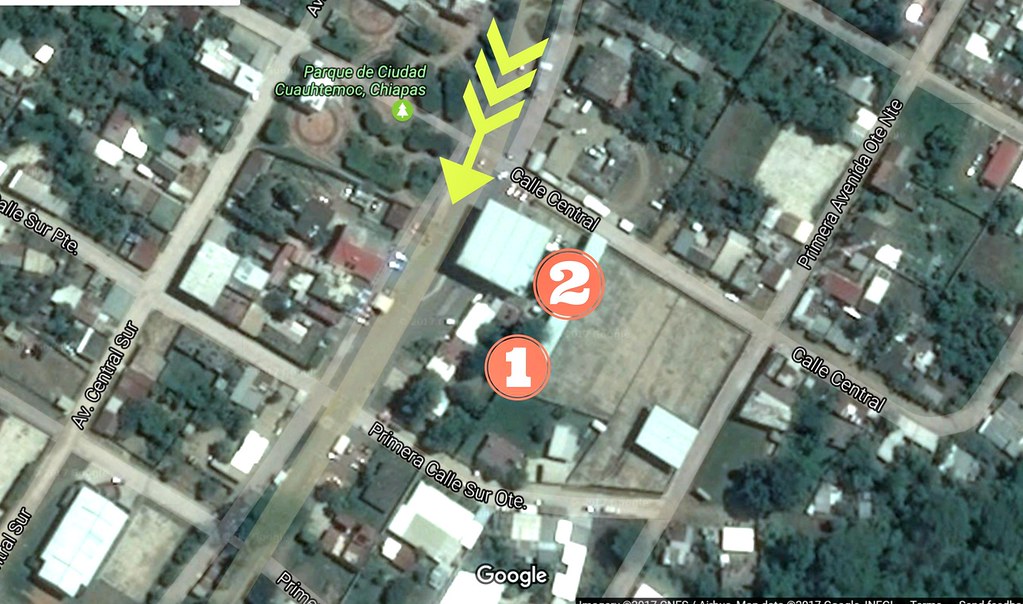 Crossing the Border in Guatemala at La Mesilla

So there is a long stretch of no man’s land between when you check out of Mexico, #3 in the photo and reach the Gautemalan border at #4 in the photo. 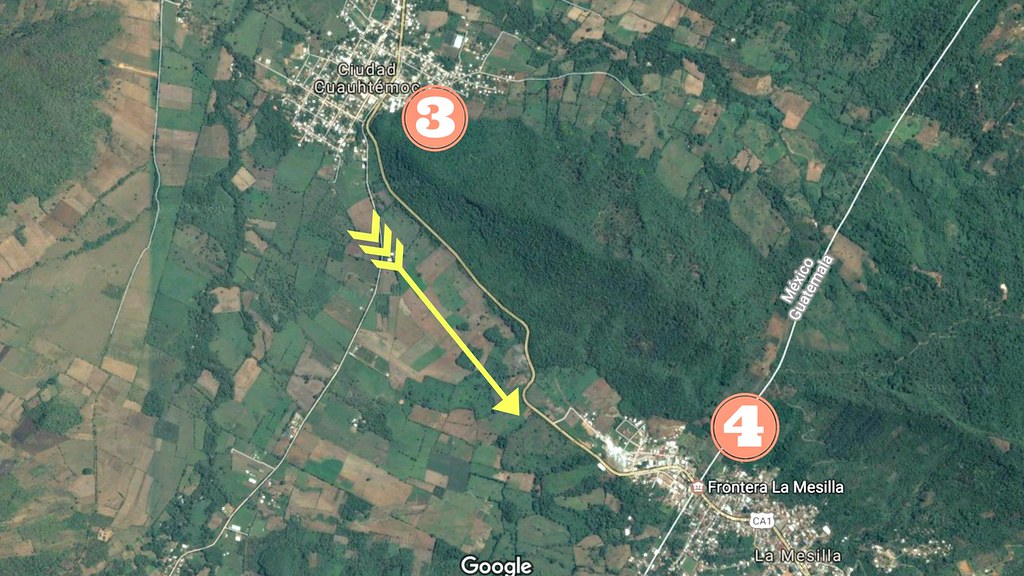 I reached an open gate at the border, #5 in the photos. I did stop before the gate as it looked like a government building there. But I was waved on by a money changer who said the fumingation and border was on the other side of the gate.

Just on the other side of the gate, at #6 in the photo, is where you have to get your motorcycle fumingated. It cost 11 Q or about $2 Canadian.

I then exchanged my Mexican pesos with the money changer that showed me where to go. He was the only one there. I didn’t have much so I really didn’t care about the exchange rate. Plus he had helped me. But the rate seemed reasonable.

Right next door at #7 in the photo is the immigration office. They were really friendly. I just filled out some paperwork, and he stamped my passport. That was it. I hope that is all that was required … huuummmm. I guess I will find out.

The Aduana for my motorcycle entry is just next door at #8 in the photo. 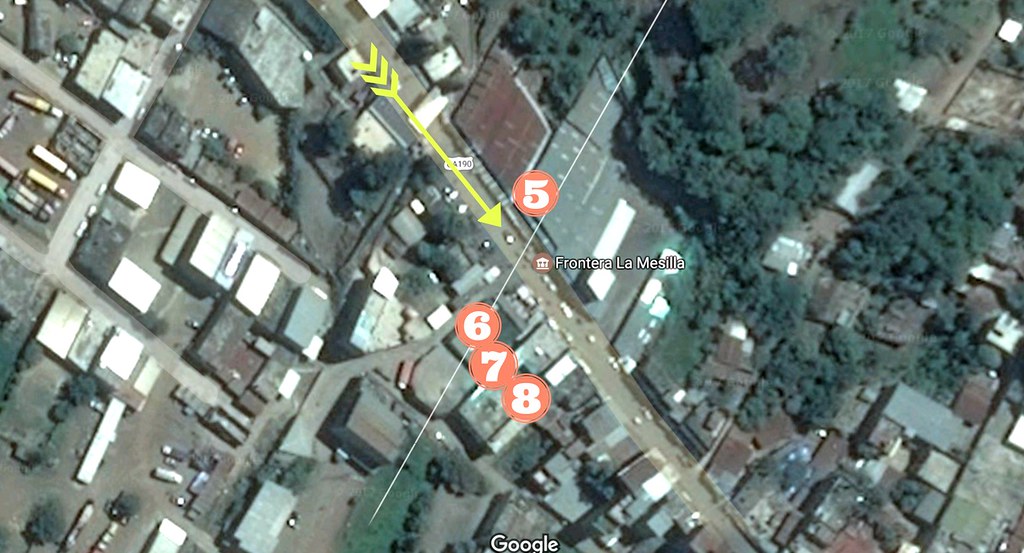 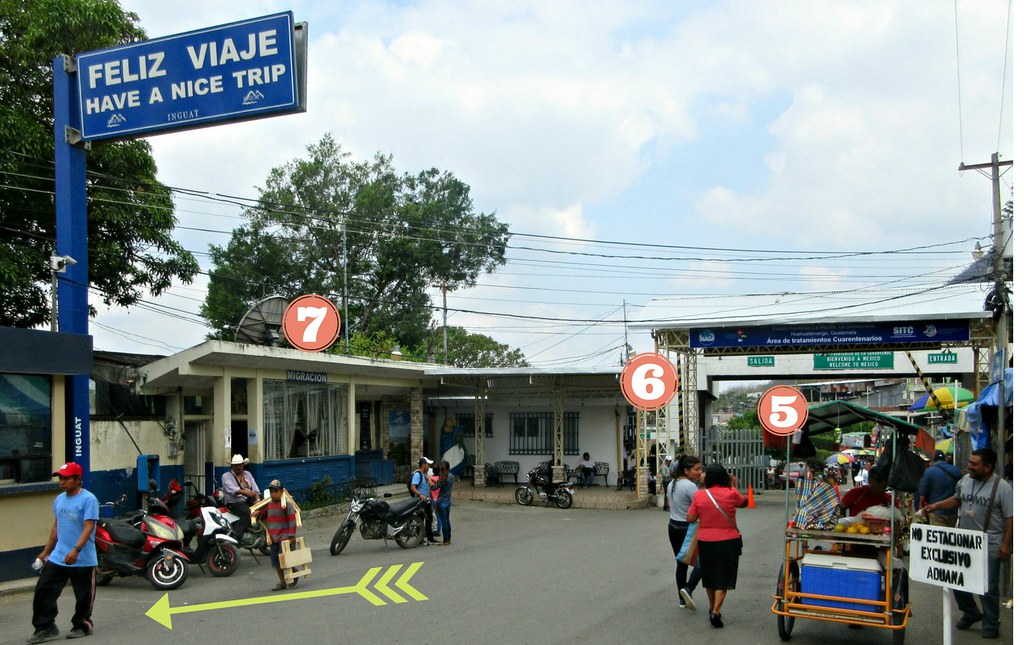 The people at the Aduana were equally as nice. I gave him my registration, passport and drivers license and he spent what seemed like an eternity filling out paperwork. I then had to go next door to pay a fee of 160 Q or about $30 Canadian. Then it was back to the Aduana where he had more paperwork to do ha ha. Poor guy. After all that he came out to my motorcycle and put a import sticker on my windshield. 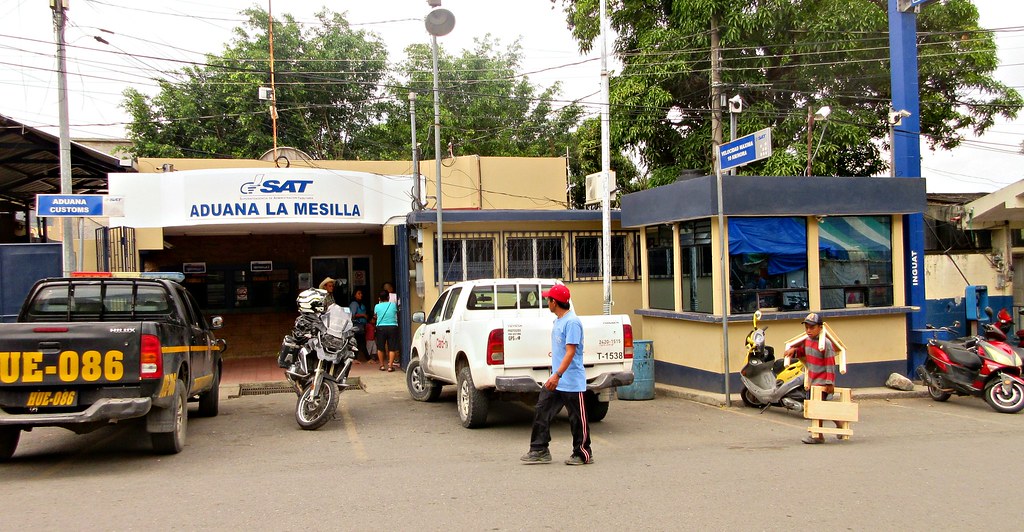 I was now in Guatemala! I let out a cheer. The policeman next to me said welcome to Guatemala 🙂

As I left the Aduana it felt like I was riding into the abyss ha ha. 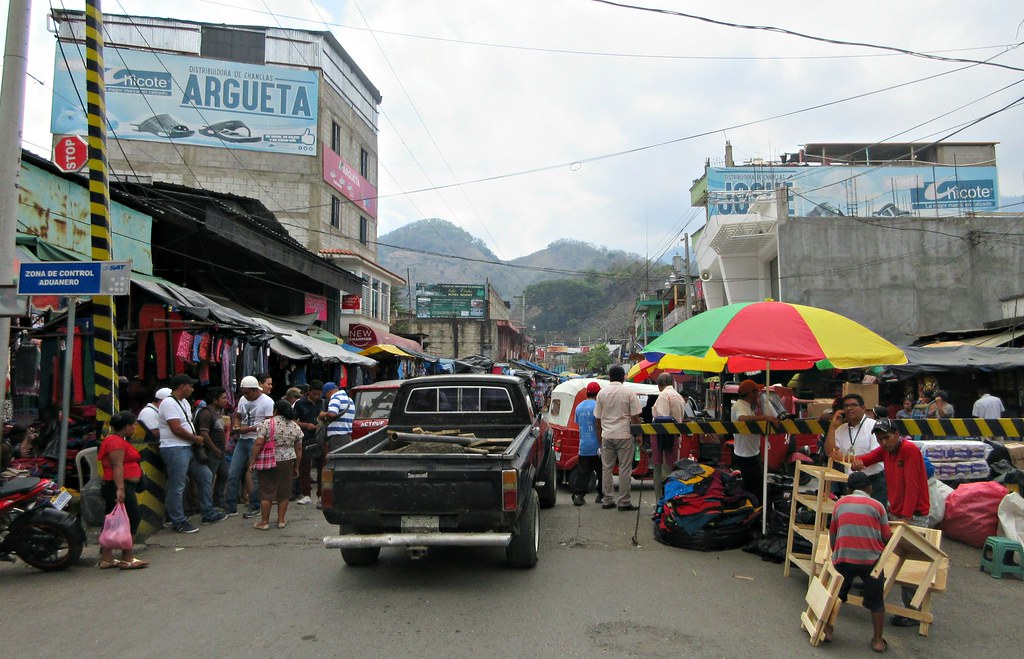 I didn’t want to stay too close to the border but still close enough because I had no idea how long it would take to cross. I decided on Huehuetenango.

The hotel I stayed at, La Chacra de Joel Hotel, was tucked in off the street in a quiet treed area.

As usual I decided to explore the town a bit. Boy, there wasn’t much there that I could find of interest. 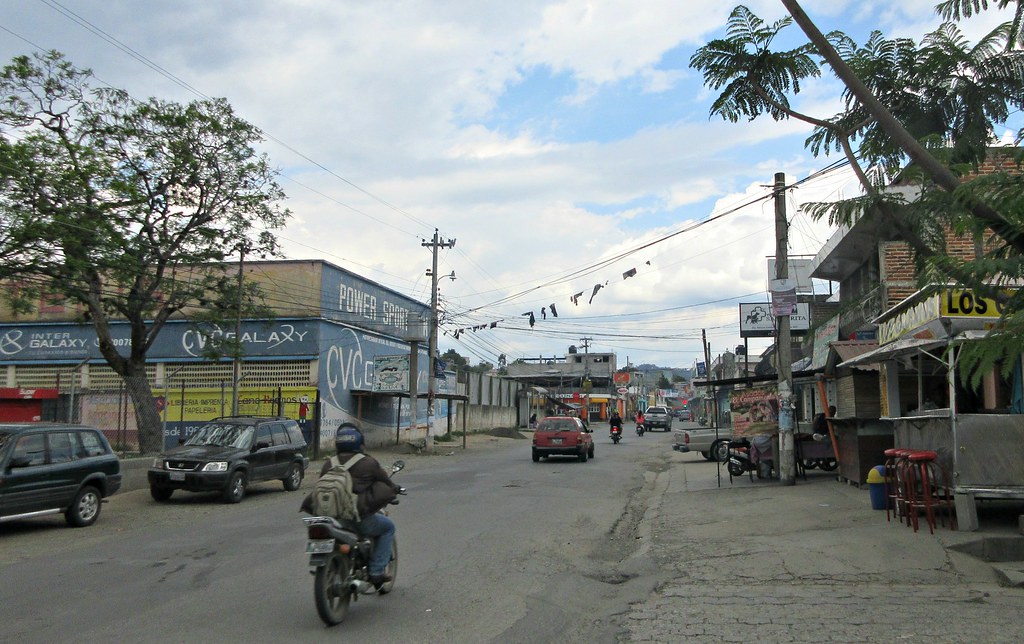 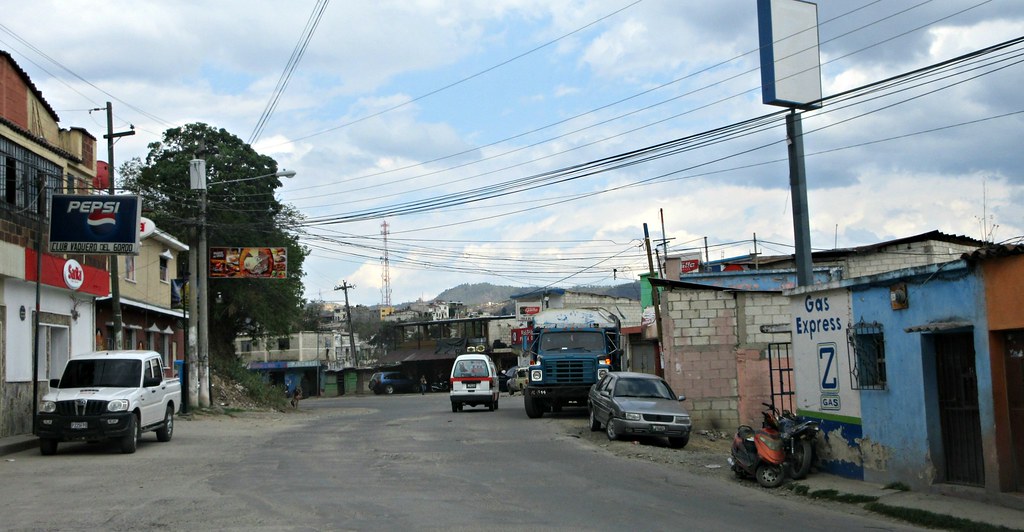 Tripadvisor did recommend a coffee place nearby, Fuego Café. I headed there hoping it would be a bit a refuge in unknown territory. It was. 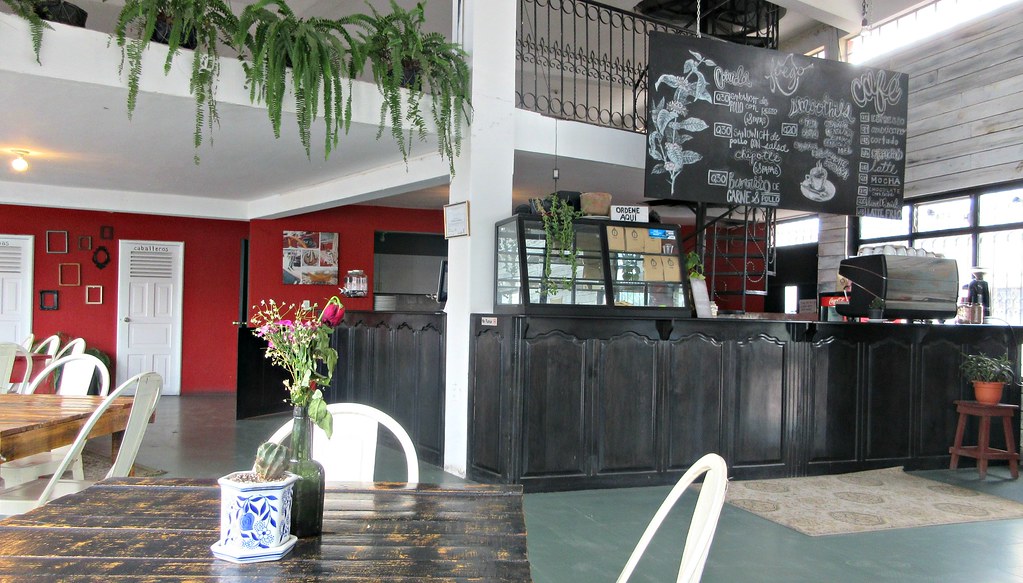 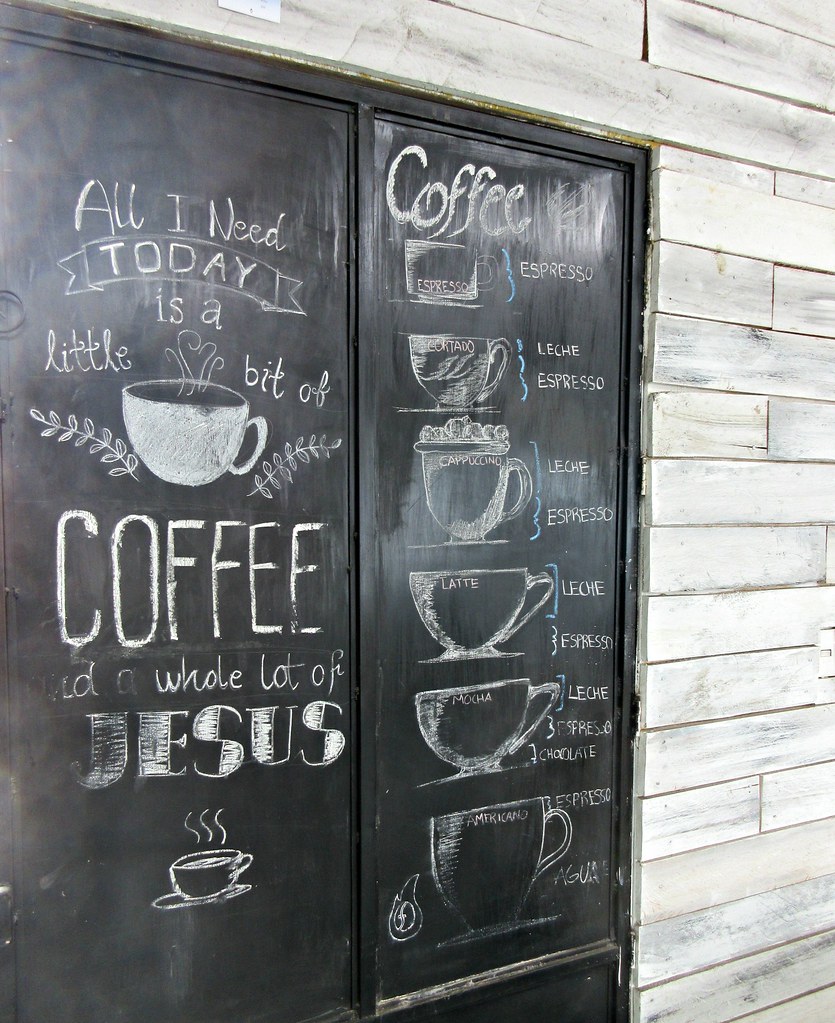 I had a victory coffee and sandwich for crossing another border 🙂 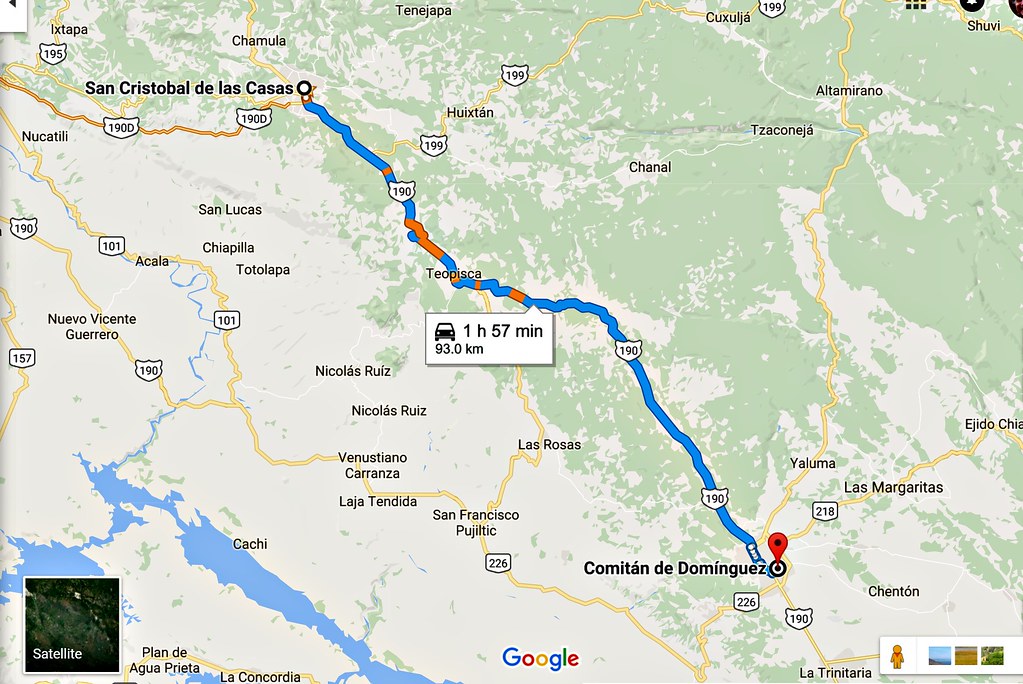 My Route from Comitan to Huehuetenango on May 16, 2017 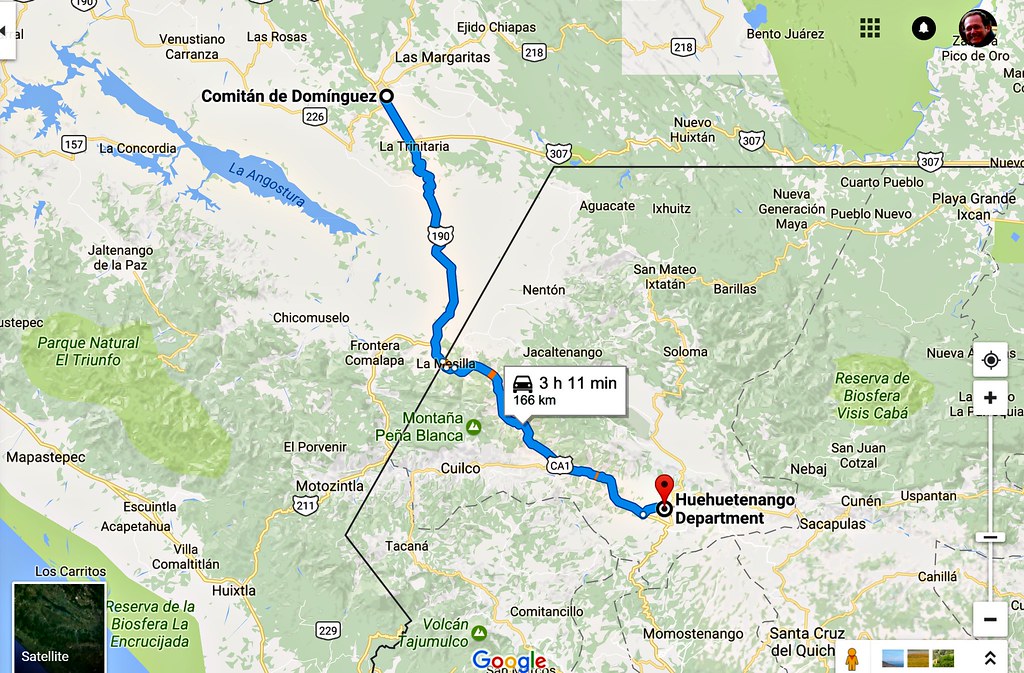 If you liked what you read, please share this story. Choose your platform!